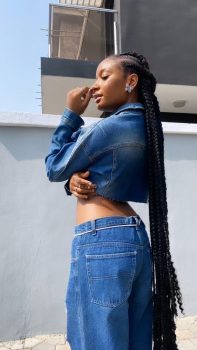 WITH HER IMPRESSIVE DEBUT EP, AYRA STARR COULD BE NIGERIA’S OWN AALIYAH

On July 11, 2019, Ayra Starr uploaded a video on Instagram, which had her closing her eyes as she rendered a raw, breathy cover of Tuface Idibia’s 2005 hit “Ole”. Eighteen months later, Mavin Records had her sign the dotted lines as they welcomed her into one of Africa’s biggest record labels.

She refers to herself as a “celestial being”, but make no mistake, Ayra Starr didn’t just fall from the sky. She has been working hard to hit the right notes, her Instagram page replete with covers of songs like Jessica Reyes’ “Great One” and Jazmine Sullivan’s “You Know When You Lost One”, as well as original compositions like “Lifeline” (written in the early stages of 2020’s COVID-induced lockdown) and “Damages” (co-written with her brother Milar). Little wonder, then, that she caught the attention of Mavin CEO Don Jazzy, who didn’t hesitate in presenting the Edo-born singer with a recording contract.

Ayra Starr, the eponymous debut EP from the 18-year-old prodigy, premiered on music streaming platforms in the early hours of January 22, 2021. With five tracks and a listening time of 13 minutes, the record features production input from Louddaaa, Dayogrey and Don Jazzy.

The EP gets off to a start with “Away”, a track whose acoustic guitar draws you in before the sparks let fly with the opening lyric “how far/make you no dey bother”. Thematically similar to Destiny’s Child’s “Bugaboo” and TLC’s “No Scrubs”, the song comes with a catchy refrain in its hook that amplifies the stop-texting-me rhetoric. Ladies now have a new song to nod along to while they ignore the Direct Messages sent by the men who they don’t find attractive.

On “Ija”, keyboard and percussion blend in a manner reminiscent of the first few notes in Wizkid’s “Sweet One” (off Made In Lagos) as she goes about expressing her lust over a (male) love interest. “Take me like a thief in the night” and “turn your body up & down” are lines that hint at assertiveness: Starr is clearly not shy about her fleshly desires, and she loves her men taking charge.

In “DITR” (Diamond In The Rough), there is less sensuality & more introspection. Aided by an electric guitar, this song dwells on rebellion and the disillusionment that accompanies growing up. The lines “she’s still your baby/nothing has changed please/she’s only aging” register the conflicting emotions. There’s a tinge of juvenile confusion too, which is fitting, considering that Starr lost her father nearly two years ago.

The lyrics “I want you by my side/when you stop dreaming” tell you all you need to know about “Sare”, a track that is centred on post-pubescent romance and movie-like fantasies about undying love. Label mate Johnny Drille, the (erstwhile) Nigerian prince of love ballads, applies his mixing and mastering skills to this song that would blend perfectly into a wedding playlist. Kehinde Lijadu would be smiling from the great beyond, too, with the interpolation of “Orere Elejigbo” (a song composed by the Lijadu Sisters in 1979) helping for nuance.

The record closes out with “Memories”, a mid-tempo tune that has Starr craving for longer moments, as she assures her love interest of sustained presence. “Follow me, follow me to Italy” is the lyric for an opening sequence that nods to Omah Lay’s “Bad Influence” (off the Get Layd EP).

Ayra Starr thrives on relevant themes – lust, love, self-discovery – as well as top-level production, as it succeeds in its quest to make an artistic impression. In the dreamy-eyed singer, we see a woman who is young, restless and eager for adventure. From a vocal perspective, there’ll be comparisons to alternative crooner Tems, but it would be unfair to put Starr in that kind of box: she should be credited for heavy sprinkles of pop flavour into her music, as well as her brilliant vocal control.

In Starr, it is difficult not to see a few parallels with Aaliyah, the late American pop star who defined R&B and Pop in the 1990s. Some may argue that it’s a long call – Aaliyah released her debut single at the age of 14 – but on a closer look, it is easy to identify, in Starr, a verve similar to the lady who churned out hits like “Are You That Somebody?” and “One In A Million”. There will be other days to discuss Mavin Records’ A & R strategy, and how in terms of talent acquisition she may be the yin to Rema’s yang, but Starr possesses the right combination of talent, attitude and sass needed to navigate a successful career in Nigeria’s gritty music scene. Who knows, she may become to Don Jazzy what the “Princess of Urban Pop” was to Timbaland. It is hoped, ultimately, that nothing (and no one) rocks her boat.