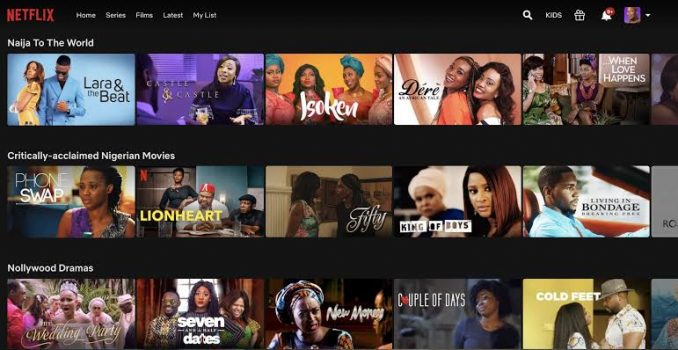 Interestingly, Fifty, directed by Nigerian novelist and film director, Biyi Bandele, became one of the first films to be streamed on the platform…

Netflix arrived in Nigeria in 2016 when it first became available to Nigeria and 129 other countries around the world. The streaming giant swiftly began to acquire rights to local films, mostly through licensing, enabling Nigerian filmmakers to resurrect their films which had previously been released in theatres. In 2018, Genevieve Nnaji’s directorial debut, Lionheart, became the first Nigerian Netflix original after the streaming service acquired the worldwide rights to the film.

Interestingly, Fifty, directed by Nigerian novelist and film director, Biyi Bandele, became one of the first films to be streamed on the platform.

Netflix’s presence really began to be felt in the country in 2020 when it officially launched Netflix Naija and vigorously began to ink deals with Nigerian filmmakers, announcing several original films and series from the country. Some of these projects have premiered on the streaming platform and even become hits, like Kemi Adetiba’s hit series King of Boys: The Return of the King. There are many more to come, but here are some of the most anticipated Nigerian Netflix originals coming to the small screen soon.

The very first time Netflix announced a Nigerian original series, it was an untitled project to be helmed by Akin Omotoso (Vaya, The Ghost and the House of Truth, Jacob’s Cross). It was expected to be Netflix’s first original series set in Nigeria, a position which has been taken by Adetiba’s King of Boys: The Return of the King. But till date, the series is still being called “Untitled Akin Omotoso Project” and no date has been announced for its release.

The series is said to be inspired by a moment from Omotoso’s childhood and is co-produced by Kemi Lala-Akindoju (The Smart Money Woman, The Ghost and the House of Truth).

Directed by Omotoso, Daniel Oriahi (Sylvia) and C.J. “Fiery” Obasi (Juju Stories), it is a six-part fantasy series produced by Rififi Pictures, set in contemporary Nigeria and shot in Lagos.

According to reports, it follows the story of Kemi, a goddess reincarnated as a human to avenge her sister’s death, as she learns to use her powers to protect her family and defeat her enemies. The screenplay is co-written by Omotoso and Dami Elebe (Skinny Girl in Transit, The Men’s Club), among others.

Wole Soyinka’s 1975 play, Death and the King’s Horseman, is being adapted to film by Netflix and EbonyLife, and both filmmaking giants have entrusted the project into the hands of Biyi Bandele (Half of a Yellow Sun, Fifty) as both screenwriter and director. The Nobel Laureate’s play, itself, is a fictional account of real events that occurred in colonial Nigeria when the horseman of a Yoruba King was prevented from committing ritual suicide by the colonial authorities. The film is expected to stay true to the plot and setting of its source material.

Principal photography started in October, 2021, with the excellent Lance Gewer (How to Ruin Christmas: The Wedding, Happiness Ever After) as the cinematographer.

The members of cast have been kept under wraps, but singer-songwriter Brymo has announced that he is playing the role of Olohun Iyọ, the praise singer, in the Soyinka adaptation, marking his Nollywood debut. Announced in June 2020, there is no official release date yet for the film.

Another Netflix original helmed by Mo Abudu’s EbonyLife, The Secret Lives of Baba Segi’s Wives is yet another project being adapted from a book, this time by Lola Shoneyin. Shoneyin’s award-winning, first novel, The Secret Lives of Baba Segi’s Wives follows the scandalous story of the polygamous Baba Segi, his wives, and the lengths they are willing to go to in order to have children in contemporary Nigeria.

Unlike Soyinka’s work which is being adapted to film, Shoneyin’s is being adapted for television. But while both adaptations were announced at the same time, too little is known about the series. In fact, at this time, the directors, writers, cast, and even producers—other than EbonyLife itself— are yet to be unveiled.

It is yet to be released, but one thing we know is that Blood Sisters, one of two Netflix originals presently in development to be directed by Biyi Bandele, has an interesting premise. Two friends, Sara and Kemi, played by Ini Dima-Okojie and Nancy Isime respectively, find themselves trying to get away with murder after one of them accidentally kills her abusive fiancé on the day of her traditional engagement ceremony.

Set and shot in Lagos, the thriller is produced by EbonyLife, and it wrapped up filming in September, 2021. So we expect a premiere date soon. Bandele has declared that the movie is stupendously exhilarating, and we certainly hope it is!

In September 2020, Netflix announced a series to be helmed by Inkblot Productions and created by Chinaza Onuzo (The Arbitration, New Money) and Dami Elebe, with Onuzo serving as executive producer and Elebe as head writer.

Reportedly titled Far From Home, the series has been described as a young adult drama following the story of Ishaya, “a charismatic teenager and talented artist from a poor family, whose dreams suddenly appear within reach when a prestigious scholarship to the most exclusive school in the country catapults him into the luxurious world of Nigeria’s 1%— all while a huge secret threatens his newfound status and, ultimately, his family’s safety.”

A six-episode series, Far From Home is directed by Onuzo, Tope Oshin (In Line) and Niyi Akinmolayan (The Wedding Party 2). Except for Funke Akindele-Bello who is known to have been cast in a major role, the rest of the cast is still largely unknown. And although the series was announced in September, 2020, there is yet to be an official release date.