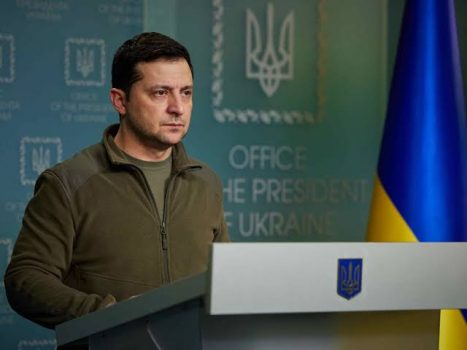 Stranded in Ukraine: Why Nigeria Cannot Demand Fealty From Nigerians

When the Nigerian embassy in Ukraine deigned to act, it responded with a statement that all but told Nigerians stranded in Ukraine that they were on their own…

For the most part of this week, a tremor rippled, and continues to ripple, through the world. The source of the tension was the conflict between the United States, Russia and Ukraine. Ukraine had been part of the defunct USSR (Union of Soviet Socialist Republics) headed by Russia. Several years after the split, President Vladimir did not hide the fact that he still considered Ukraine a part of Russia.

Given the history of mistrust and bad blood between the United States and Russia, it was understandable that Putin opposed Ukraine’s move. Countries all over the world followed the unfolding events with trepidation. If the two super powers were to go to war, the rest of the world would definitely get sucked in, beginning a third world war, one that would definitely test the nuclear might of nations.

However remotely countries around the rest of the world felt about the possibility of the outbreak of war, Ukraine residents, who were at the center of the conflict, felt it even more. Early in February, as Presidents Joe Biden and Vladimir Putin traded threats, Ukraine residents, both citizens and non-citizens alike, started fleeing the country. The United States, Canada, Germany, and Australia evacuated members of their diplomatic staff and their families. India used a national carrier to evacuate its citizens. Other countries issued directives and facilitated efforts for the smooth exit of their nationals in the country.

By Thursday, the 24th of February, 2022, when Putin’s grandstanding translated into actual occupation of parts of Ukraine, signaling the start of a war, most conscientious countries had taken their citizens to safety. But apparently, African countries, Nigeria inclusive, operate with a different set of rules. Even though Ukraine is the choice destination for Nigerian medical students, over 4,000 at the moment, the Nigerian embassy seemed to not have plans to evacuate its citizens.

Reports were that several months earlier, some of these students had reached out to the Nigerian embassy in Ukraine about evacuation plans, given that other nations were evacuating their citizens. They were told to check the embassy’s website for information regarding that. They did, but discovered that the website had last been updated on January 26, several weeks prior.

When the Nigerian embassy in Ukraine deigned to act, it responded with a statement that all but told Nigerians in Ukraine that they were on their own. The message read in part, “The embassy wishes to add that should any Nigerian nationals consider the situation as emotionally disturbing, such nationals may wish to temporarily relocate to anywhere considered safe by private arrangements.” The statement was disappointing in that it offered no respite to the worried Nigerians in Ukraine and their families. It was even more shocking in its brazen lack of empathy.

At the moment, it appears there is a special flight to evacuate Nigerians stranded in Ukraine, after the backlash the Nigerian embassy in Ukraine received over its statement. In fact, it had taken interventions by the Federal House of Representatives to get things in motion. This begs the question of whose responsibility it is to step in in an international crisis like the one in Ukraine. More importantly, one wonders why there is an actual ministry of foreign affairs, an embassy in Ukraine headed by an ambassador. It begs the question of what the suddenly-roused authorities had been doing the entire length that the trouble brewed before things boiled over.

It is almost forgivable if the in-house systems do not work in the country. We can manage and make do with the scraps the government doles out to us. We can pretend that all is well and even engage in Twitter banter with nationals of others countries, holding on to the tatters of our imagined superiority. We can endure, smile, and keep mum while dealing with failings in our country. However, no amount of banter can mask the pain that sears through you on learning that your country neglected your safety when you were stranded in strange territory. What greater betrayal than that?

It would be understandable if this was a lone incident, if the authorities slipped this one time. But this sort of dereliction of duty has become characteristic of the government, especially as it concerns citizens abroad. For instance, in September 2019, at the height of the xenophobic attacks faced by Nigerians in South Africa, it had been a private businessman, Allen Onyema, who had dedicated one of his planes to fly stranded Nigerians home, free of charge. The Nigerian government did nothing.

Furthermore, when novelist Chimamanda Ngozi Adichie’s father was kidnapped in 2014, it were United States officials who had helped rescue him, even though he had been kidnapped in South-Eastern Nigeria. His saving grace, it seemed, had been the fact that he was an American citizen. As Adichie said in an interview later with Ebuka Obi Uchendu, Nigeria frustrates one.

There is indeed a mammoth exodus of the best brains in Nigeria. Every other month, there are reports of Nigerians getting visas for further studies abroad, the most explored routes to exiting the country. A report has stated that President Muhammadu Buhari plans to stop the exodus. Ordinarily, this ought to be the ideal move because Nigeria suffers the risk of a severe brain drain going by this rate.

The best brains are exiting the country, leaving dregs to man the country. But why should anyone prioritise Nigeria over personal plans? What is the incentive for any young person to stay? When our green passport seems like a liability, why would young people not cast it aside? There is a reason a lot of young Nigerians, 73 percent according to Premium Times, are willing to leave the country. There is a reason the corpses of millions of Nigerians litter the Sahara desert, their ambitions taking their lives. Most of them are gullible, and many could even be accused of laziness and foolishness, but desperation is the soil these other reasons take root from.

The real tragedy, it appears, is not that many people are leaving and that most are willing to go through dangerous routes to achieve it. The tragedy indeed is that there are people who cannot leave, that despite their yearnings for a better country, they can only settle for one they are saddled with, praying that the country does not end them.