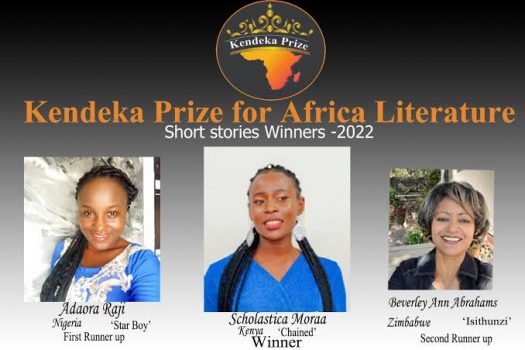 At the award ceremony in the TAS TV studios in Thika, Kenya, Kenyan writer, Scholastica Moraa, has been announced as the winner of the 2022 Kendeka Prize for African Literature for her short story, “Chained.”

The winning entries were selected by judges such as Siphiwo Mahala (South Africa), Bisi Adjapon (Ghana), and Faith Oneya (Kenya) who noted in their statement that, “The wide range of themes, narrative styles and imagery tells of a continent undergoing a literary revolution. Scholars might not have coined a suitable name for it as yet, but these new voices are redefining the African literary tradition in their own terms.”

From a longlist of ten African writers, a shortlist was announced on September 15th, 2022.

Moraa is the author of a collection of poems, Beautiful Mess. Her short story, “6 Days to Twenty” was longlisted in the 2021 Kendeka Prize for African Literature. Her fiction has appeared in Arlington Literary Journal, Midnight and Indigo Literary Journal, The Coachella Review, and The Bookends Review.