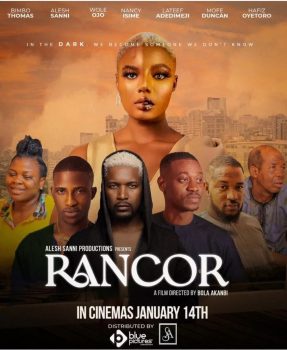 Rancor Movie Review: An Unfit Piece for the Nigerian Cinema

The problem is not the movie trying to incorporate so many unnecessary acts, but the abysmal manner in which it does this.

The new year has been quite eventful, and one can only imagine what it will be like by the first quarter. The cinemas have been busy with back-to-back releases and premieres ongoing. So far, we have seen the good, the bad and the exciting. Nollywood directors are working double as much to put their works out there, and Bola “Enigma” Akanbi is not left behind. The director whose fan base went up after he won the 2020 AMVCA for a Best Short Film with his piece of art Thorn, caused a fuss of excitement on the announcement of his new movie, Rancor, breaking the Internet, especially Twitter before its release into nationwide cinemas. There were best act nominations, giveaways, and meme challenges. The coming of the movie proved to be music on everybody’s lips.

The Rancor movie, directed by Akanbi premiered on January 14th, 2022 at Blue Pictures cinemas at the Lagos City Mall and was released into cinemas nationwide on January 21st, 2022. The tragic drama from Alesh Sanni Productions, tells the story of Dasola (Nancy Isime), a graduate, young and beautiful who has an inexplicable hatred for her younger brother, Murewa (Alesh Ola Sanni) who is an asthmatic patient. Coming from a struggling home of three, Dasola tries to make a good life for herself by extorting her male friends; however, she finds herself in a bad spot when she mistakenly kills her boyfriend who tries to rape her. Walking in on the scene was her mother (Clarion Chukwura), who decides to take the fall for her daughter’s crime, and is then arrested and given a life sentence.

The movie opens with Murewa accompanied by two vigilantes walking towards a gate and knocking. In comes Nancy Isime who tells the vigilantes that she doesn’t recognise Murewa. They then take him away and treat him like a criminal, beating him until, short of breath, he slumps and has an asthma crisis. As he scrambles to get hold of his inhaler, he is abandoned by the vigilantes to die. Not long after, Dasola leaves the village for Lagos, leaving her brother and mother behind. Her mother dies in police custody and through dream, tells Murewa to go find his sister.

Rancor does not take time into consideration in its skipping to scenes without notification of how much time has passed. Their mother’s arrest, Dasola seeking a hideout, Murewa being evicted by the landlord, and their mother’s death, as well as speaking to Murewa in his dream, all happen within a duration of 5 minutes in the movie’s running time. However, Murewa goes ahead to look for his sister whom he finds with no obvious address, direction or even spiritual guidance from his dead mother.

Murewa is later found by Dasola’s husband, Uche (Mofe Duncan) lying on the streets and decided to help him. The improbability is uncanny here. Why that particular stranger? Or does Uche go around helping strangers, letting them into his home? Such improbabilities run through the thread of the film.

On bringing Murewa home, a lot more is unveiled: Dasola had run away from her village to work as a house help for her now-husband, changing her identity and her name to “Olamidum.” It’s obvious that time hadn’t changed her hatred for her brother, as she sternly warns him not to blow her cover to avoid Uche uncovering her past, which she eventually does by herself by the way.

Although it has begun to sound cliche saying that Nollywood movie trailers and publicity posters portray their movies in lights brighter than they actually have, it is a risk worth saying in the case of Rancor. The problem is not the movie trying to incorporate so many unnecessary acts, but the abysmal manner in which it does this.

There are so many unclear scenarios seemingly attached to the movie, the actions are unaccounted for and shallow, almost like a piece created out of boredom and pushed into the cinemas. There is no concrete back story or justification for Dasola’s hatred for Murewa. It is also odd that when Uche finds out his wife had lied about her family, his reaction is uncharacteristically unfazed.

The suspense element is lost. As hostile as it may sound, I believe the only reason Alesh Sanni was left on the set of this movie was because he produced it. Not only was he unfit for the role, he also kept making uncharacteristic grammatical blunders. Occasionally, Amaka, Dasola’s sister-in-law showed inconsistency in her character: she’s nice, and then nosey and then inquisitive. It was almost as though her character had no personality attached to it.

Regardless, we do not take for granted actors like Adedimeji Lateef and Nancy Isime who gave the viewers something to look up to by bringing their A-game to the piece and giving us a good laugh. Moreos, the meme challenge on Twitter was centred on Dasola’s threat to Murewa and Emeka’s reaction to being offered five million against five hundred thousand naira.

The kidnappers, secondary characters in the movie, are poorly built, and their relevance clouded. There is no reason given to why they abduct their victims, or who their victims are. Did the abductees fall out of the sky? Why is no one looking for them? There is no request for ransom or compensation, thereby creating a quixotic perspective to the criminal act.

On a general note, the Rancor movie is a baseless and unsubstantiated piece that has a good story going but makes so many unjustified moves and loses its viewers in the trail of this. The acting skills of most of the top Nollywood stars featured were not deeply explored. We had the likes of veteran actress, Clarion Chukwura who only appeared on one scene and disappeared afterwards.

Do we ignore Yinka Salau who was kept in a room as a kidnap victim throughout the duration of the movie, making little or no contribution to the plot? For a movie running short of content, the presence of most of those top faces should have been properly utilised.

The errors in Rancor could have been overlooked had the movie been released on a smaller platform, but instead it was put out in the cinemas for widespread consumption. The movie is the definition of unfit, substandard for the cinemas.