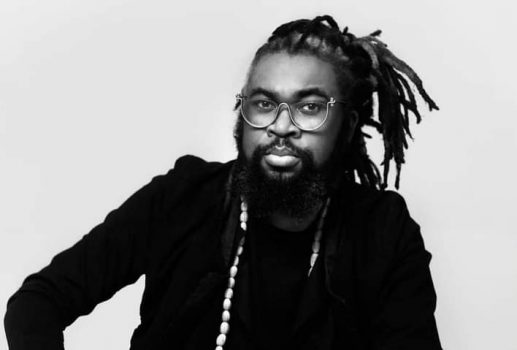 He would also read his poetry at several music and literary events. Many people at the time were in awe of the precocious young boy sticking his lean frame out in the public, in places where only heavy weights traded…

In 2006, while still a student of Sociology and Anthropology at the University of Nigeria, Nsukka, Onyeka Nwelue told his parents he wanted to go India to focus on his writing. He had no illusions about what he wanted with life. He had been writing as long as he could remember, and did not see himself doing anything else. For long he had formed the picture of a cosmopolitan writer’s life—a man essentially a citizen of the world, travelling and publishing books. Nwelue was only eighteen when his father bought him a plane ticket to attend the Jaipur Literature Festival in India.

Nwelue had a good literary education. He grew up reading, and came to value books as a repository of human life, thoughts and impressions. “I was raised in a house, full of books. From my paternal and maternal sides, we are steeped in creativity. Musicians, writers, visual artists and many things. I easily gravitated towards writing and painting,” Nwelue says. On his mother’s side, Nwelue is related to Flora Nwapa, the first female African novelist in the English language, first published under the African Writers Series imprint at Heinemann, then edited by Chinua Achebe and James Currey. “My mother made sure I knew I was related to her and brought all her books.” This background provides an insight into his parent’s support for his dreams. For them, writing was an honourable profession.

At 11, he wrote his first short story, “The Talkative Monkey and the Rabbit,” and illustrated it as well. The story would later become part of his first novel, The Abyssinian Boy. While working on his first novel in India, and living in Chandigarh, he learnt to speak Hindi, Bengali and Urdu (in neighbouring Pakistan), which he says helped to eliminate racial considerations in his dealings with Indians. He had said that his experiences in India was mixed. There were times he suffered greatly and his father sent him money from Nigeria; but he also recalls meeting wonderful people such as the Indian novelist, Shobhaa De.

On his return to Nigeria, he was lucky to have the book published by Dada Books. In 2009, the novel won the inaugural Ibrahim Tahir Prize, and the T.M. Aluko Prize. “The book opened all doors for me,” Nwelue says. Close observers would attach this statement to his prodigious prolificacy, for till date, aged 34, Nwelue has published over twenty books across the different genres.

Born in 1988 to a family with a long illustrious history of nobility, tradition and storytelling, Onyeka Nwelue has spoken of how a significantly privileged background could exert a strong influence in the making of a person. For poor people, he suggests, the lack of economic resources could degenerate into negative vices. It is then a case of economic freedom leading to positive rather than negative character building, he posits. As controversial as these views may be, Nwelue believes that they are valid since they come from his own personal experiences and keen observation of life.

In his early years, Nwelue’s zeal for the curation of literary events had manifested itself when he tried to organise a literary festival in the city of Owerri in his home state of Imo in Nigeria. He recalls how that event had a chastising effect on him, for the only people who came, out of all the invited guests, where his family. Even though he was deeply unhappy about this event, he did not give up. What he wanted to see was a place where literature, writers, and literature curators met and told stories.

He would visit Lagos at 16 and meet with the likes of Jahman Anikulapo, Beautiful Nubia, and Wole Soyinka. He would also read his poetry at several music and literary events. Many people at the time were in awe of the precocious young boy sticking his lean frame out in the public, in places where only heavy weights traded.

Gradually, he became attracted to places and the peculiar stories they hold. He would travel around the world searching for these stories, perhaps, and trying to tell them. From India, the first country he visited, he would go to Hong Kong where he was a Visiting Professor at the University of Hong Kong. In Europe, he began a peripatetic existence visiting and living in most of the countries of Western Europe. In Czech Republic, he studied Filmmaking at the Prague Film School. In France, he would focus on getting more leverage for his record label, La Cave Musik. Through his visits to many Caribbean countries, he built a personal relationship with Trinidad & Tobago, and the Republic of Haiti. The Universite Queensland in Haiti awarded him a honorary Doctor of Humane Letters in 2019. In June 2022, he was made Haiti’s honourary Consul to Anglophone West Africa, touted as Haiti’s first diplomatic ties with Anglophone West Africa in its 218-year history. In Trinidad, he had established a friendship with the Trinidadian writer, Earl Lovelace.

In his sojourns in the United States, Nwelue has held Visiting Research positions at Ohio University and Harvard University. Through the other roles he has taken in travels across over 80 countries, he maintains connection with the essence of his life which is writing and storytelling.

His search for stories have also seen him establish himself as a filmmaker. His debut feature film, an Igbo-language adaptation of his novel, Island of Happiness, won the best feature film by a director at the Newark International Film festival. He has also made a documentary film on Flora Nwapa. Recently, he made a biopic on Biafran leader, Emeka Odumegwu Ojukwu, titled The Other Side of History. In answering the question on the relationship between filmmaking and literature, he has stated that “filmmaking itself is literature.”

Onyeka Nwelue has developed a philosophy of life hinged on the veneration and commemoration of people while they are alive. He detests the idea behind burial celebrations in which great accolades are given to people only after their death. “We give deserving people their flower while they are alive,” he says. Over the years, this new way of seeing old, established human institutions and practices has driven him towards literary curation. The major idea behind these ventures is to honour people who have contributed to literature through the establishment of lasting legacies around their work and personage. 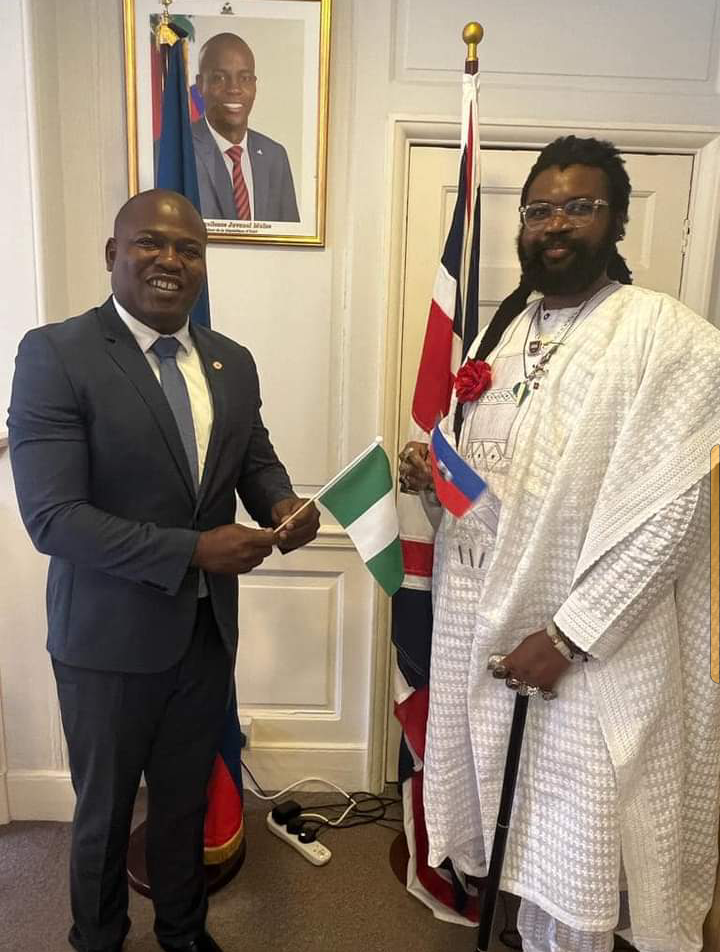 The publishing company Nwelue established in the United Kingdom in 2021, Abibiman Publsihing, is a not-too-subtle nod towards his much vaunted mentor, Wole Soyinka, whose 1976 book-length poem, Ogun Abibiman, was a touchstone in his winning of the Nobel Prize in 1986. Nwelue first met Soyinka when he was sixteen. He had read almost all of Soyinka’s plays, and was particularly taken by The Lion and the Jewel, and the delicate and complicated love story at the center. He has narrated how he met Soyinka for the second time at the Jaipur Literary Festival in 2010: he had slipped a note under the door of Soyinka’s hotel room at the Rambagh Palace, and moments later, Soyinka came out looking for him and, that evening, they had a long conversation about so many things, and thus began a relationship that has lasted for more than a decade.

Nwelue says that Abibiman Publishing grew out of personal rejection. He had received an email from an American publisher who said his novel, The Strangers of Braamfontein, was “unintelligible.” Armed with a firm belief in the merit of his work, he strode into the world of publishing with a sense of vindication. Now Abibiman, having published a lot of promising, young writers, is going stronger with the passage of time. The now defunct World Arts Agency, a literary agency he co-founded in Johannesburg, South Africa, helped to bridge the poor representation of African writers.

The same philosophy inspires Nwelue’s establishment, in 2020, of the James Currey Society based at Oxford University where he is an academic visitor. The James Currey Society, perhaps his greatest achievement to date, is centered on commemorating the life and work of James Currey who is widely regarded as the “godfather” of African Literature. While a director of African Writers Series at Heinemann Publishing beginning from the late 1950s to 1990s, Currey curated the publication of over 250 African books, and thus oversaw the establishment of the canon of African Literature as it is known today where there had been none before he came in. Currey also established his academic publishing imprint, James Currey, under Boydell & Brewer, in 1984 and has published many influential books till date.

Nwelue saw a shocking gap in that not much has been done to perpetuate Currey’s legacy and contributions to African literature. In subsequent moves, he also established the James Currey Prize for African Literature, and the James Currey Fellowship administered by the James Currey Society in cooperation with the African Studies Center at the University of Oxford. The inaugural winner of the prize in 2021 was Nigerian writer, Ani Kayode Somtochukwu, and the inaugural James Currey Fellow in the same year was South African writer, Stephen Embleton. There is also the annual James Currey Literary Festival which holds every year. This year’s festival begins on the 1st of September and ends on the 3rd. 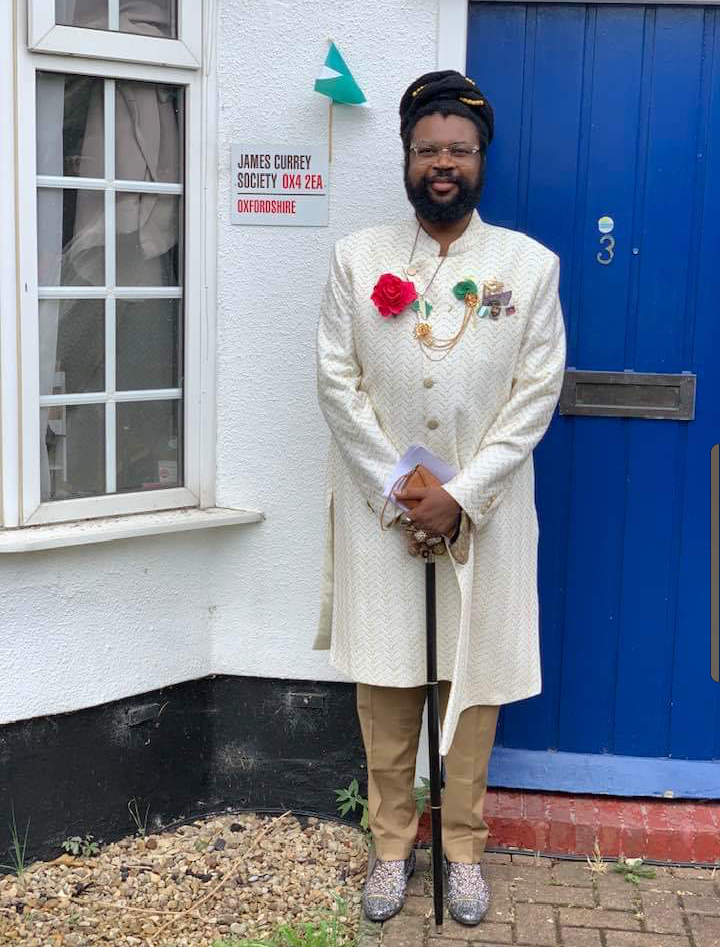 One of Nwelue’s lasting legacies will be the establishment of an Igbo Language Class at the African Studies Center, University of Oxford. The pioneering move puts Nwelue at the forefront of those pushing the study of African languages and culture on the world stage. Nwelue has reiterated that his motivation for this is to perpetuate worthy legacies while living. Perhaps, here the personal experience meets the public persona in action. Nwelue’s stance on life may have grown out of his near-death experience with a ghastly accident in 2018 just after his thirtieth birthday.

Among Nwelue’s other establishments, there include the Hattus Bookshop, which operates in South Africa and India at the moment. He also established the Onyeka Nwelue Scholarship for Outstanding Imo State Student in Economics to encourage academic research in economics in Nigeria. He is currently helping to establish a film school in Haiti.

Currently the Dean of Cinematographic Studies at the Universite Queensland in Haiti as well as a visiting professor and Academic Visitor at the Manipur University, India and Oxford University, United Kingdom, respectively, Onyeka Nwelue strikes a particular pose in the consciousness of young Nigerians, with his views which many view as unorthodox. He has been vocal in his criticisms, and generous in his praises. He tries to stay away from people, he says, even in admiration. This candor with the stark reality of human relationships is what he thinks everybody should assume. He believes that to achieve concrete things and leave a legacy, one must detach emotions from one’s actions and strive towards objectivity.

Perhaps Nwelue’s legacy wouldn’t have been possible without a kind of selective objectivity through which he identifies the unsung heroes of our world, but this new way of seeing, of singing odes to heroes while they yet live, is a fresh approach to perpetuating legacies in a contradictory world of distance and emotions.