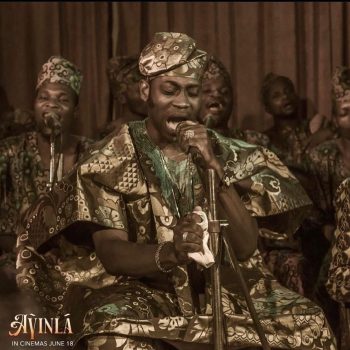 Now and then, Hollywood goes crazy about biopics. In recent years especially, it is almost a given that a biopic will be nominated at the Oscars and very likely that a biopic will win a major category. A sizeable number of these biopics are musicals.

For some reason, however, Nollywood has barely explored the genre despite the repertoire of notable figures who have elevated themselves to legendary status at different points in Nigerian history. Sure enough, biopics are not easy to pull off, but maybe it’s because many Nigerian filmmakers are not daring enough. Thankfully, the duo of Jadesola Osiberu (Isoken, Sugar Rush) as producer and veteran filmmaker/director Tunde Kelani (Maami, Dazzling Mirage) were not afraid to try.

Ayinla is an eponymous musical about the late Apala musician, Ayinla Omowura, who was addressed by a litany of sobriquets: “Alhaji”, “Egunmogaji”, and “Anigilaje”. It is a Yoruba language film that stars Lateef Adedimeji, Kunle Afolayan, Debo Adebayo (popularly known as Mr. Macaroni), Ade Laoye, Omowumi Dada, Bimbo Manuel and Bimbo Ademoye. To be clear, Kelani has clarified that Ayinla is “not exactly a biopic, it is, in fact, a story inspired by the life of the Apala music legend”. 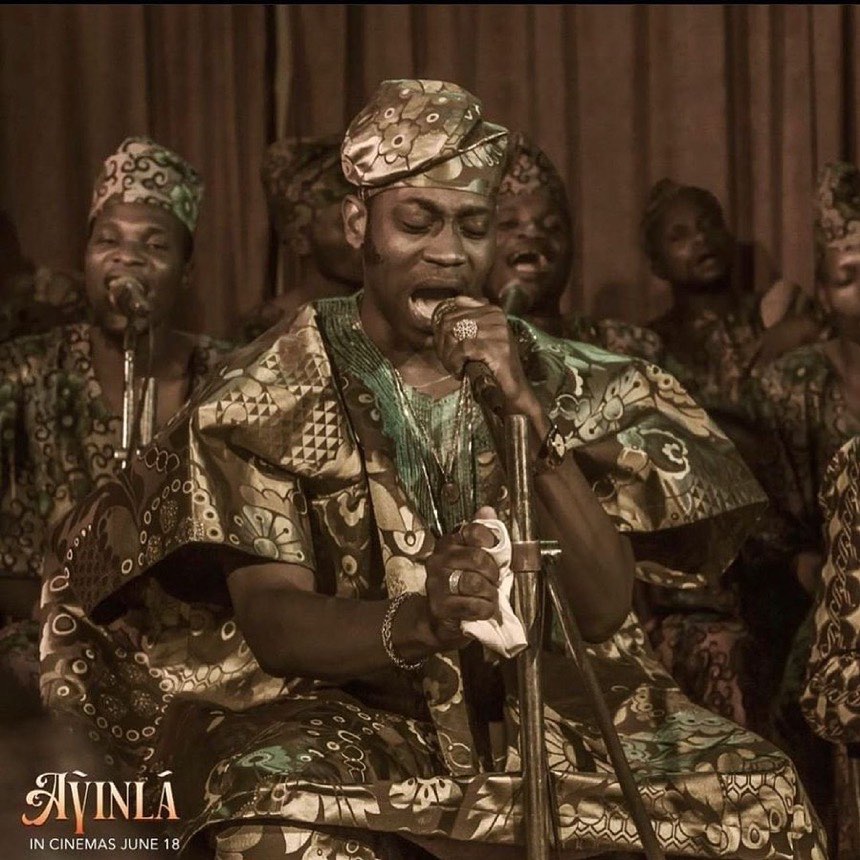 Set in 1970s Abeokuta, the film chronicles the rise to fame of Ayinla Omowura, his relationships with women, and the tragedies that ultimately befall him. As Ayinla becomes a household name, a show promoter is determined to take Ayinla (Adedimeji) and his Apala Group on tour in London, and a journalist (Laoye) is given the assignment to interview the uneducated musician who has an apparent aversion to interviews. At the peak of his career, Ayinla’s womanising leads to a feud with his Manager (Mr Macaroni) and sets him on a path to doom.

Ayinla starts off in dramatic fashion and holds on to that energy throughout its nearly two-hour running time. In many ways, the tempo of the film a tribute to the great man whose story it tells. The scenery and the costuming are compelling. The feel of the time is consistently present, both in visual and auditory terms. The soundtrack in particular is immersive, featuring not only Ayinla’s songs but tracks composed by other notable artistes of the time. It is worthy of note that the film takes its setting so seriously, it resists the temptation of not-so-subtly advertising the bank that bankrolled it as cinema Nollywood is wont to do; First Bank did exist at the time, so this is a thing.

As nostalgic as the soundtrack might be to many viewers, the film will be remembered more for its strong acting. Other than the band members, most of whom did not seem to be professional actors, the casting was well done. It is, no doubt, difficult to play a fictional character, but it is more difficult to pull off a person who actually walked the earth, with their known complexities and nuances. Many actors simply do not have that range. They often end up being a caricature or, at best, mechanical. 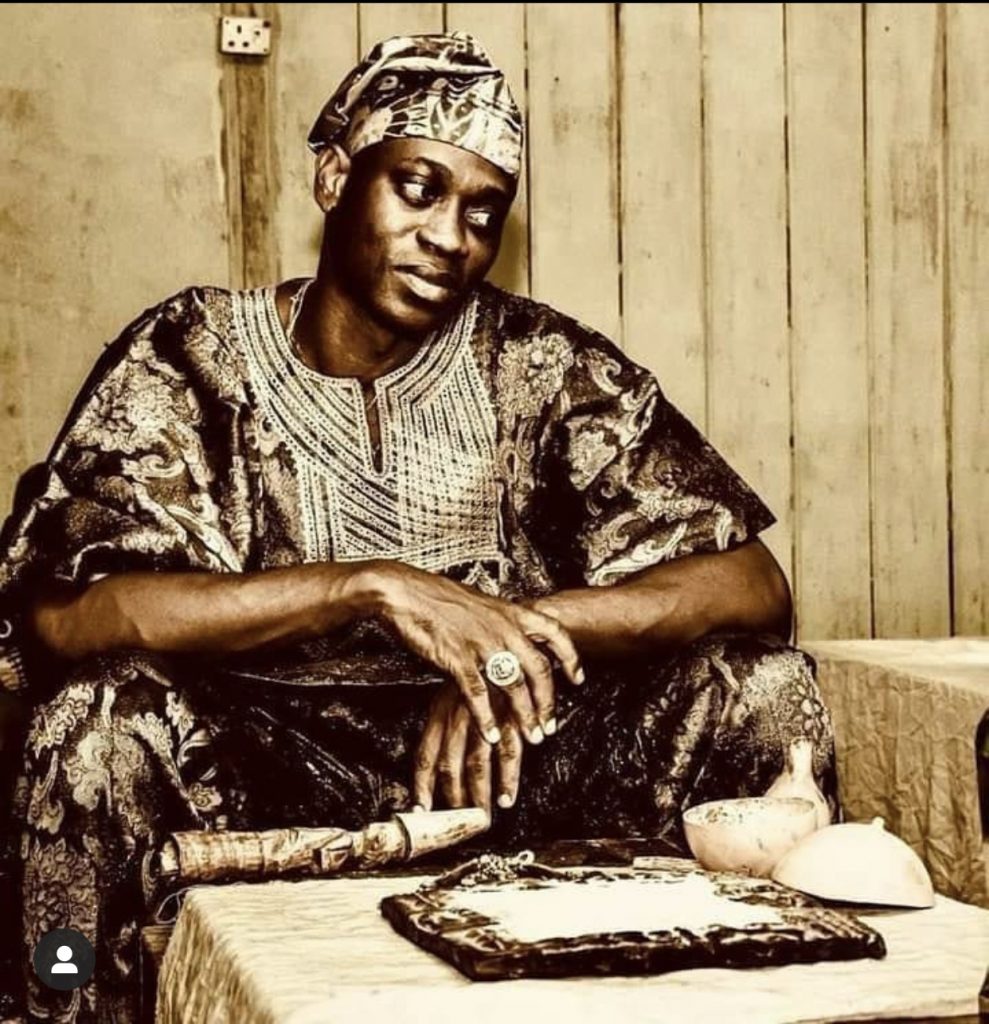 In Ayinla, Adedimeji is real and as close enough to excellent as anybody could probably get. His facial expressions and gestures are deliberate and natural. Debo Macaroni definitely holds his own for a relative newcomer, even as he is made to interpret a role out of his comfort zone. Afolayan’s acting may not always be at the level one would expect from a person who knows and understands good acting as much as he does, but in this film, Afolayan wears his role like a necklace. Laoye beautifully balances the part of a hippy, socially-conscious journalist who is clearly “still learning work” but has the potential to make a big name for herself. Dada makes an ordinarily unlikeable character a little more lovable. Manuel aces the role of father-figure to perfection.

However, Ayinla is not without its drawbacks. Since the film is not exactly a biopic, it would be unfair to critique it based on its historical accuracy in relation to the characters and the plot. But as a story inspired by the legend’s life, there is a greater opportunity for artistic licence and creativity. Sadly, like the Hollywood biopic The United States Vs. Billie Holiday, Ayinla missed the opportunity.

The film labours to make particular points, reiterating ad nauseam the fact that Ayinla was a great musician who was also a fetish, uneducated, hot-tempered womaniser. His tendency to purchase drinks for everyone was also brought to the fore: the line “serve them round” will live rent-free in your head. The unintended result is that the film describes the person of Ayinla, but fails to adequately tell a story. Even with Ayinla’s London Tour and the journalist tailing him, the film mostly feels scattered and chaotic. There is simply not enough of a plot for this man who seemed to be larger than life. If at all there is a story, it only starts to take shape when the end of the film is already in sight. It certainly does not help that plot points disappear never to return, leaving plot holes in their wake — the most annoying being his pregnant wife, especially considering that Ayinla actually had children in real life. 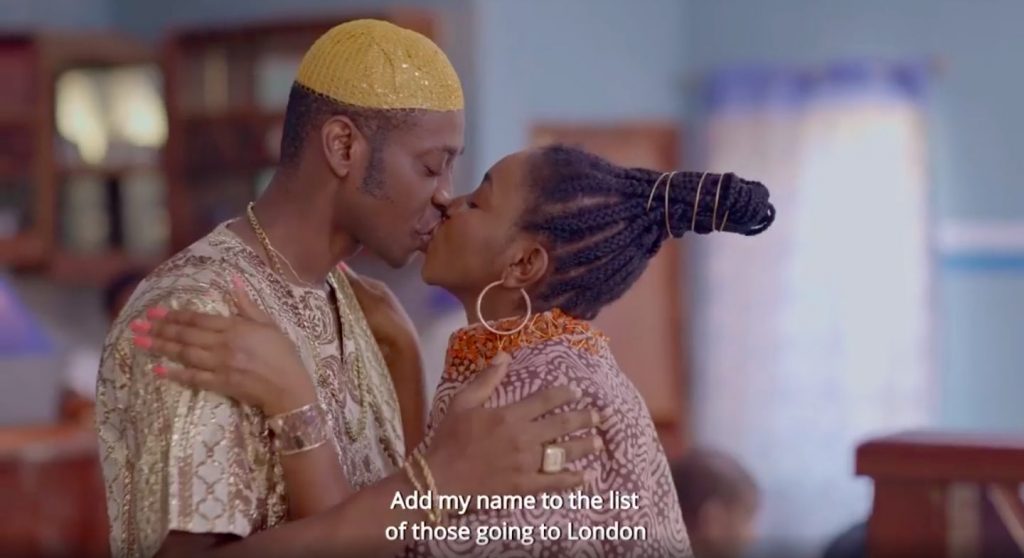 Ultimately, Ayinla is undoubtedly an impressive film. What it lacks in plot, it makes up for with great acting. Indeed, in spite of its flaws, it places Nollywood on the right path and sets a precedent for future biopics. It should be exciting to see the projects that follow.