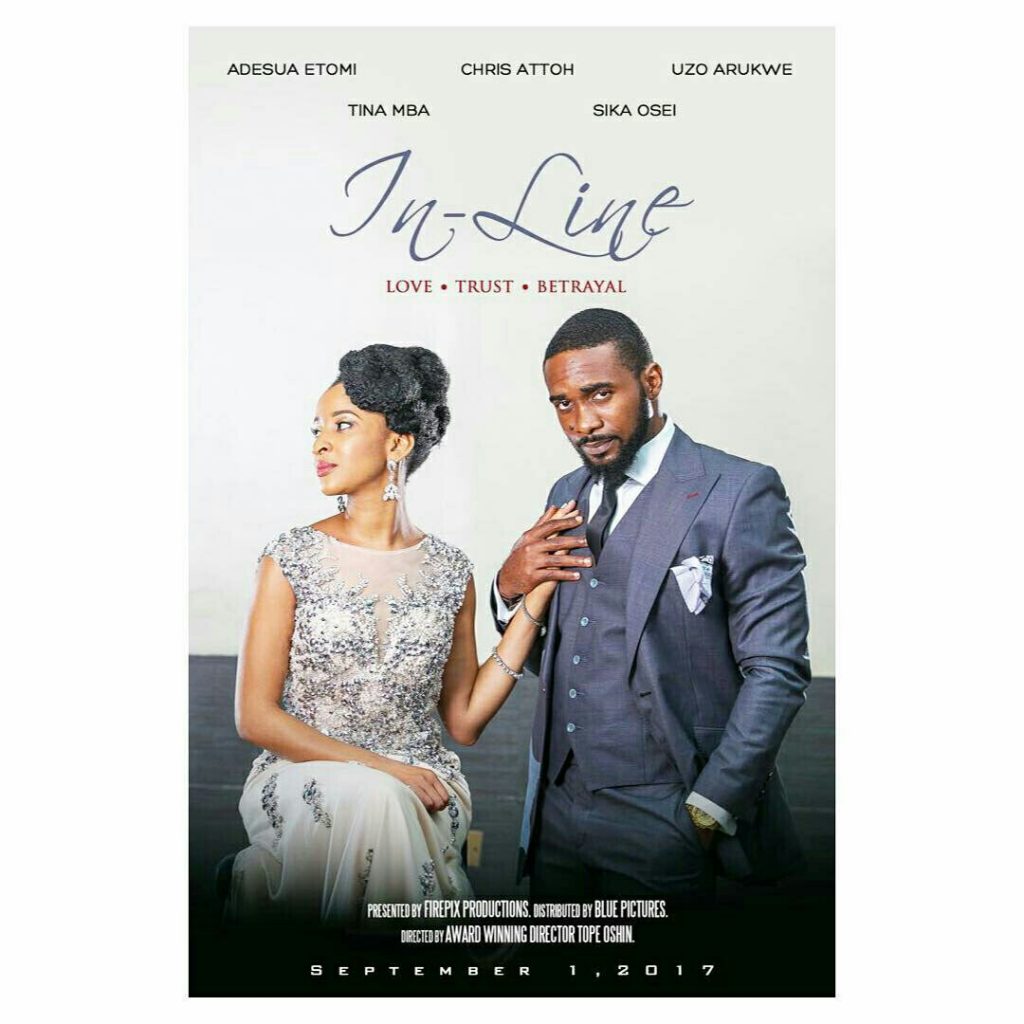 In Line is a movie about a man named Debo (Arukwe), who goes to jail for murdering his own father, but obtains presidential pardon six years later thanks to the influence of his mother (Mba). He returns home, but things are awkward between him and Kate (Etomi), the wife he left behind. She refuses to sleep with him, prefers work at her advertising agency to being around Debo, and finds comfort in the company of David (Attoh), Debo’s best friend and lawyer.

On his part, Debo exhibits a lot of possessiveness, he is given to outbursts of anger and violence, and he cannot seem to trust Kate, suspecting her of cheating. He enlists the help of his ex-girlfriend Bella (Osei), a private investigator, to spy on his wife. Debo and Kate get caught up in a web of lies, distrust, manipulation and power play.

The movie does well in raising some modern issues, from spousal abuse to marital infidelity, toxic relationships, and domestic violence. Adesua Etomi, who was far from impressive with “Ten Days In Sun City”, interprets her role quite well here. Uzor Arukwe gets into character as the obsessive control freak, Sika Osei puts up a good show, Chris Attoh’s role is unremarkable but relevant to the plot, while Tina Mba and Shawn Farqua could have used a little more screen time, but made an impression nonetheless.

While the movie is quite well laid out, a few points are impossible to ignore. First, there is something too seamless about the way Debo is re-integrated into society and into work, Nigeria is not so kind to ex-convicts, let alone convicted murderers. There are also a few glitches with the scenes, like where Kate ties a scarf around her neck after an altercation with Debo even when she isn’t quite Caucasian to have the choke marks show, or where Bella’s headscarf appears in two different ways in the same scene. Again, the part where Bella trails Kate to find out her moves has to be the most unstealthy spooking ever; someone needs to watch more thrillers or play more video games. The part where David and Kate try to forge Debo’s signature (as husband and wife were co-signatories to the company account) also raises questions as to how Kate had access to money during Debo’s imprisonment, but in their defence, one signatory could have a limit to how much he/she can approve alone, and that may have been the case here. Beyond that, having Bella become a maid in Debo’s house as part of the spying process was just too predictable.

The movie starts well, and the conclusion is properly tied too, and while the second act begs for pace, you can’t argue with the delivery of the lead characters. This may not be one of the most memorable clips in the history of cinematic Nollywood, but it is a more than passable effort, and it is worth the watch.

(In Line is currently available for streaming on Netflix.)