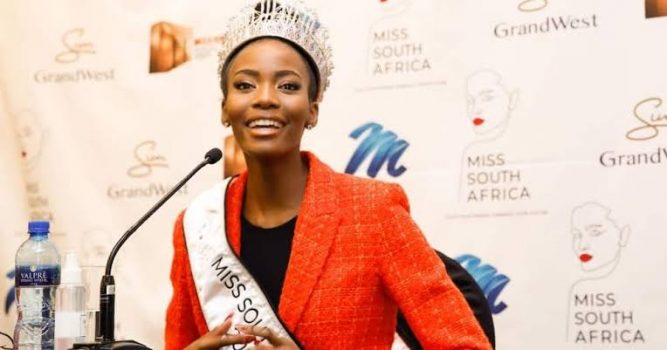 To Boycott or Not to Boycott: Miss South Africa 2021 Takes on Her Nation, and Wins?

…An African proverb states that if a man cooks for the community, they can finish it, but if the community cooks for a man, he would scarcely consume it all. This anecdote definitely did not anticipate Mswane… as the South African authorities withdrew support for her and the Miss South Africa 2021 organisers

When Law graduate, Lelela Mswane won the Miss South Africa pageant on 16 October 2021, she was perhaps overjoyed by the rewards that came with that feat. The winner of the annual pageant gets R1 million in cash, a fully-furnished and serviced apartment, a Mercedes Benz, and more importantly, represents the country at the global Miss Universe pageant. However, no sooner had the crown touched her head than controversies sprung up regarding Israel, the location of this year’s Miss Universe Pageant. Mswane was at crossroads.

She either had to go on with her childhood ambition of taking a shot at the second most prestigious crown in the world, or boycott the competition, siding with her statesmen who had accused Israel of apartheid towards its Palestinian population.

Conflicts between Israel (the Jews) and Palestinians (this term is used to refer to the Arab population, who currently make up a third of the State of Israel) have raged for years. The origin of the turmoil can be traced to the 1967 “the Six-Day” war in which Israel roundly defeated Arab countries, including Egypt and Palestine.

Victorious Israel then annexed East Jerusalem, the West Bank, and the Gaza Strip, lands historically belonging to Palestine. In 1993 and 1995, the Oslo Peace Accord had Israel withdraw from Gaza and some other areas. However, the West Bank still remains under Israeli control, including the Arab population in the region. Israel claims that the territory is Holy Land grantedd to them by Jehovah in Genesis 15:18.

The conflict had thus raged on but took a particularly vicious turn this year, with many Palestinians taking to the streets to protest the horrible conditions they were subjected to in the country. According to reports, Israel denies Palestinians some of the basic rights enjoyed by the Jews.

Following these developments, various human rights groups have tagged the country an Apartheid state, a loaded term that is mostly used to describe a state of affairs that even now remains a blot on South Africa’s history. One of such groups, B’Tselem, accused Israel of creating a system where 7 million Jews and 7 million Palestinians live under one government but with “vastly unequal rights.” Israel has denied this term and has repeatedly reiterated that the Arab minorities in its region enjoy full rights.

Given the history of South Africa with racial discrimination and segregation during the Apartheid era, many South Africans felt it was unconscionable for Mswane to compete in a pageant being hosted by a country embroiled in such allegations. Prominent among those requesting that Mswane boycott the pageant is Mandla Mandela, Chief of the Mvezo Traditional Council, and grandson of Nelson Mandela’s. Mandla released a statement on Instagram that read in part: “Apartheid Israel’s occupation is no less despicable than Apartheid South Africa.

The world responded to our call to stand in global solidarity against the Apartheid regime. Now we reiterate our call to boycott, divest and pass sanctions campaign Apartheid Israel. We must not support or legitimize the victimization of our Palestinian brothers and sisters.”

However, Lalela has been resolute in her intention to be part of the pageant. In a statement, she stated, “There is no greater time to shed light on issues affecting women, to choose courage over comfort, and to be steadfast in my beliefs regarding the advancement of women and our rights. I view my participation in the pageant as a unique opportunity to not only do just that but to also be part of, and hopefully contribute to, a process of dialogue and peace.”

In the light of all that, the South African authorities withdrew support for Mswane and the Miss South Africa organisation. They stated that they had to make the move after they could not convince the pageant organisers to boycott Israel. “The atrocities committed by Israel against Palestinians are well-documented,” the country’s Minister of Arts, Sports and Culture, Nathi Mthethwa, said.

Several days after this, Israel restricted travel from South Africa after a new COVID-19 variant was discovered in the country. Many took this as a sign that the Universe was not in support of Mswane’s intention to still compete at the pageant. However, there were speculations that following previous trends, pageant contestants are often granted exceptions from such travel restrictions. These speculations seem to hold true at the moment because Mswane shows no sign of backing out.

There are two prominent questions to be distilled from the outlay of events above. The first is whether Israel is indeed an Apartheid state. The second is the propriety of the call for Mswane to boycott the competition and the subsequent backlash that came when she did not heed. At the moment, it is still not settled whether Israel indeed is an Apartheid state. Various vociferous arguments exist on both ends. For that reason, we will not engage in that lengthy discourse.

However, the call for Mswane’s boycott and the furore it generated is quite interesting. There is a responsibility, a moral one, at least, for those who are in positions of prominence to use their positions to advance social causes. Thus, for the Nigerian ENDSARS protests, many celebrities supported the cause, with artistes such as Wizkid and Flavour showing up at the protest grounds.

This is also seen in situations of racial tensions in the United States. A lot of stars have used their platforms to highlight and speak against injustice. The “taking the knee” trend started by athlete Colin Kaepernick on September 1, 2016 to bring attention to racial injustice in the United States, immediately comes to mind. This powerful and symbolic gesture shot Kaepernick into the public gaze and earned him praise, even from white athletes. In situations like Kaepernick’s and the ENDSARS protests, prominent figures who remain mum are accused of being complicit.

But, it is distasteful that in situations like Mswane’s, the public uses collated outrage to achieve compliance. No doubt, public opinion, and angst can be strategically channeled to create sustainable change. However, it gets ugly when this tool is used to coerce, emotionally blackmail and hound people to take publicly-sanctioned actions. This is because, in reality, the decision to act, when to act, and how to act should be left to the individual. Yes, prominent people hold a level of accountability to the public because their success comes as a result of aggregated public approval.

However, that is to the extent of their careers. A person’s private opinions and actions should be left at just that. This is even far critical at this moment because public angst can quickly turn vile and be weaponised. A case in point is how cancel culture has sometimes led to a stifling of discourse, dissent, and robust engagement of opposing views. This creates an echo chamber where what the majority takes as right is considered appropriate. The majority can be, and has been, wrong before.

Should Mswane have boycotted the event? Maybe. It would have had quite the effect. In fact, contestants from Greece, Barbados, Indonesia, Malaysia, and Laos pulled out of the competition in support of Palestine. However, Mswane’s refusal should have carried as much validity as her acceptance. She’d stated that she hoped to engineer public discourse and shine a light on women’s issues through her participation in the competition. That is a compelling argument.

Similarly, the South African Jewish Board of Deputies in reacting to the government’s withdrawal of support for the Miss Universe Pageant, stated that “the way we influence situations is to engage, not to withdraw…closing doors merely isolates us from contributing any contribution we can make to finding peace…” An equally powerful sentiment.

It is regrettable that Mswane was hounded on social media, with some people even threatening her life. She even had to deactivate comments on her Instagram page. Nevertheless, she bore the onslaught with grace, at least in the public glare. However, there is no telling how this could have affected her psyche.

Whatever one’s opinion about Mswane’s actions, her bravery cannot be disputed. She stood up to a whole nation. In the face of public backlash, she was ready to defend what she believed in. An African proverb states that if a man cooks for the community, they can finish it, but if the community cooks for a man, he would scarcely consume it all. This anecdote definitely did not anticipate Mswane.