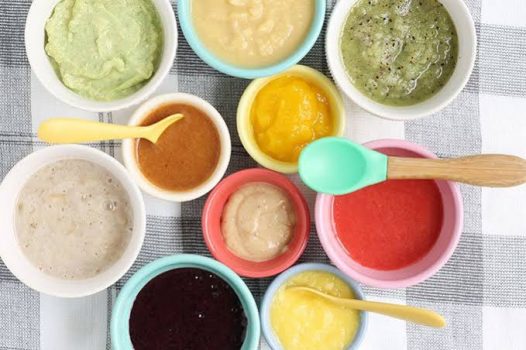 A Mother’s Guide to Cheaper and Healthier Baby Meals

In recent years, Nigeria has recorded perhaps her highest inflation rates. With the unfortunate decrease in the purchasing value of the Naira, as well as the alarming increase in prices of products, it is no surprise that consumable goods, including baby food (infant formula as well as infant cereal), have become slightly less affordable for the average Nigerian.

For those fortunate mothers with infants below the age of six months who are exclusively breastfed, the price of infant formula and baby cereal might not be on their list of concerns for now. However, for mothers who supplement and exclusively nourish their babies with infant formula and for those with babies who have reached or exceeded the 6 months mark, the rising cost of infant foods have become a reason to worry, a cause for much planning and frugality.
Cerelac, for instance, a common infant cereal which has been a constant for mothers for a long time, has become a food that might no longer be found in many nursery cabinets, the price of a large tin being over N5000 and easily consumed in its entirety before the end of the second week of its purchase. Gerber, Friso and other brands, though only slightly less expensive, are ultimately much of the same.
It has been said time and again, that having babies is no mean economic feat. Nevertheless, there are ways in which certain aspects of this experience may be made less costly, even during a period of terrible inflation in the country.

Below is a curation of 5 affordable alternatives to expensive infant cereals.

Although even the cost of fruits has increased in markets and supermarkets alike, there is no denying that fruits are a far more affordable alternative for infant solids than the expensive cereals sold on shelves today. For instance, a large bunch of bananas, depending on where you go, can be sold at N1000 and, if you are great at haggling, even less. Bananas, which are an excellent source for potassium, vitamins B6 and C, as well as magnesium, can be mashed or blended until it has reached a desired consistency for your baby, and your breastmilk or your choice of infant formula can be included in the smooth mixture for extra creaminess.
This can be done for fruits such as apples, pears, peaches and avocados. Simple recipes for pureed fruits can be found here.

In households where eggs are consumed, a crate or even two, which cost roughly half the price of infant cereal, are to be found in refrigerators or bowls atop kitchen counters. Thus, there is no reason to spend that extra cost on solids for your baby, as eggs are already within reach. One need only cook an egg yolk or two, depending on the baby’s appetite, and voila! infant solid at the ready. Egg yolks can be cooked in butter and served chopped and a little runny. They are also a great source of choline which is excellent for cell maintenance, healthy spinal cord, brain and neutral tube development; healthy fat, and cholesterol.

Like egg yolks, sweet potatoes are consumables which can be found in households with or without babies. Thus, there is no added cost to one’s monthly budget for food if one chooses to include this root vegetable in their infant’s diet. Sweet potatoes are rich in nutrients such as vitamin C, fibre and potassium, easily digested and can be prepared in different ways. They can be pureed for babies at 6 months of age; chopped or mashed and served with some rice for babies passed the age of 7 months; and mashed with butter for babies who have reached 12 months of age. A more detailed recipe for sweet potatoes for infant consumption can be found here.

At the risk of sounding repetitive, it is necessary to remind the reader that meats such as chicken and beef, perhaps turkey, can be found in the refrigerators of households with or without babies. Beef is a great source of protein as well as iron and calcium. It is also arguably one of the most easily digested meats a baby can be fed. Turkey and chicken are also high in protein, iron B vitamins and zinc which fortifies and supports the development of an infant’s immune system.
Meat for infants must be cooked chopped and boneless in plain water, and blended until a tender mix is what remains. Water can be added in the blending process until the desired consistency is achieved. Pureed veggies or fruits can also be included in the meal if you prefer.

Although sweet potatoes have already been mentioned above, vegetables such as carrots, twenty to thirty fingers of which might cost just under N900 (depending on who your seller is); spinach, broccoli and even green beans, can be introduced to your baby’s diet from 7 months of age. Vegetables which are often used in households to cook meals like rice and soups can easily be set aside for your baby’s solids, rather than the more expensive infant cereals some mothers can barely afford to purchase bi-weekly.