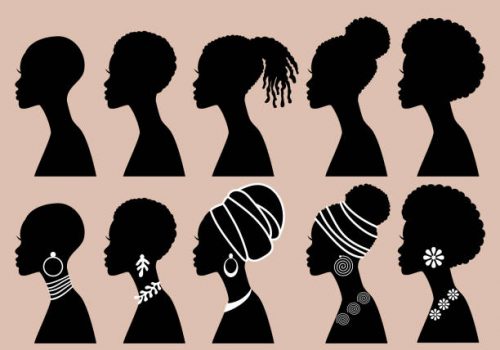 Hair Fetish Has Come a Longer Way Than We Know. It Is More Complex Than We Assumed

Today, the hair industry, according to Statista, is worth over $94 billion, projected to be worth over $105 billion by 2026…

The global hair industry is a booming sector filled with professionals ranging from stylists creating intricate patterns, to hairdressers offering a wide array of services; the braid expert with hands blessed for creating visually appealing Ghana weaves, or is it the young men who only know how to fix weaves and frontals? There are lots of options to choose from. There is also the catalogue offering “Miracle Hair Booster,” the next showing off the look to make you “Drop Dead Gorgeous,” the article telling you “the top 10 summer protective hairstyles,” or the last refreshed page that displays “how your favourite celeb is wearing their hair.” There are unending articles about how best to tend the hair, quick hair-grow remedies, solutions to hair loss, and achieving the right hair density.

Today, the hair industry, according to Statista, is worth over $94 billion, projected to be worth over $105 billion by 2026. The industry in Africa is worth as much as $6 million annually on dry hair products such as weaves, wigs, and hair extensions. Nigeria alone generates over a ₦100 million in retail sales value in haircare, far surpassing skin care, oral care and deodorant. These companies appear to be cashing in on the money.

There is also always a rave for the best hair products such as shampoos, conditioners, hair dyes, creams, gels, texturisers, etc, and recently, a demand for natural or organic care products.

A few days ago, my friends and I contemplated concepts for my birthday photo-shoot session. With outfits and sets settled, the question of hairstyle came up. Now, all I wanted to do was rock my afro like a Nubian queen. But my friends insisted on a hairdo. One suggested box braids updo while the other said only a curly weave wig would cut it. I argued – as I always do with matters relating to hair – that hair is just dead cells attached to the body, to which one of them retorted, “so is the skin, but I notice you always moisturise” which shut me up almost immediately. Hair as well as its derivatives: hair beautification, hair sustenance, adornment, and grooming, is time-consuming, sometimes painstakingly so, but I always carry a twist when I’m on the go, because I no like stress, abeg!

What really is all the fuss with hair about?  Why is it such a big deal? The complexities to hairstyles; chopping it off completely, carrying a buzzcut, wearing a wig, braids, trying out new colours, getting bangs, using a flat-iron, hair tease, etc. The thing is, the craze about hair is not new. It didn’t start with us, hair grooming dates way back before my mum ever held a hot comb. History has it that Assyrian nobles curled their hair with iron bars, and women in the 17th century would make their hair stand with animal fat. Egyptians dyed their hair with henna. Various historical timelines also had wigs as a fashion trend. Ask those from the 18th century.

Hairstyles and hair grooming choices depict an identification of a person’s culture, social, wealth and health status, among other things. It also gives perspective into one’s personality and how people choose to express themselves.

In Western climes of the world, hairstyles can sometimes help to divide social classes with its ability to distinguish the upper class from the lower cadres. The affluent would naturally settle for more elaborate and expensive, “high-quality” hair products, opting for plush styles that make them stand out. This isn’t a new trend though; ancient Greeks and Romans wore wreaths and gold ornaments on their heads. In other cultures, ivory, combs and beads on hair are a symbol of social class. Today, we find that the more expensive a hair product, the higher class value is attached to it. This lavish appeal is not limited to the hair industry alone, but that’s a conversation for another day.

To others, preference of style and hair upkeep is tied to religion, cultural values and ethnicity, with appeal and choice of style influenced by one’s location. In India for example, shaving off one’s hair at a temple may bring good fortune. The Sikh do not cut their hair as a way of honouring God’s gift. Among popular orthodox and mainstream religions, covering of one’s hair is a sign of devotion. In Christianity, the hair is described as a woman’s glory. Hair and cultural identity are woven intricately. In the Massai culture, it is common to have men and women decorate their hair with red ochre. In the same way Rastafarians are easily identified with their dreadlocks, Fulani women are also easily recognised by their unique braid style.
Hairstyles could convey a political statement and a form of activism. We see this play out in black culture movements, feminism, Pan Africanism, afro eccentricity, and so on. In Black American and African history, hairstyles and trends have been used to fight oppression, subjugation, discrimination and other unjust systems, leading to emancipation and liberation from white supremacy and patriarchal systems. For instance, black women were compelled by their superiors in workplaces to wear Caucasian hairstyles and looks.

Cornrows and afro hairstyles were termed “ghetto” and activists fought over the right to rock their kinks in its glory. Whether that battle has been completely won is still up for debate. Hair has also been used to create awareness about a cause, like shaving the head to create awareness for cancer, and advocate for more natural looks such as advocated by celebrity actress Gabrielle Union.

Conformity as it pertains to hairdo isn’t in itself all bad as it ensures uniformity in appearance such as we find in secondary schools. Other formal workplaces may decide appearance as it includes hairdo, to portray the image of an organisation or brand. Individuals also use hairstyles as a form of self-expression and to portray distinct personality, going for eccentric choices that make one stand out.

For me, the most important factor is the health status ascribed with hair care, which brings me back to my earlier assertion about hair just being dead cells. True, although the major part of the hair we see is made up of dead cells, there’s still a living component of it, the part attached to the scalp. And like all living things, it needs nourishing to be healthy.

Hair can be a health indicator as diseases associated with hair such as dandruff, scaly scalp, and alopecia, are concerns that may require medical attention. Good hair grooming is a part of good hygiene practice. People across all cultures use various oils such as castor oil, almond oil, coconut oil, shea butter, etc, to moisturise the hair and also to protect against extremes of weather conditions. The hair should be washed, permed, oiled and moisturised to keep it healthy and glowing.

Lush, cascading hair is a sign of youth. To hide signs of aging, some older people adorn styles usually favoured by younger people. Sadly, this insecurity is a tool the media easily preys on, feeding off our vulnerability with talks of “The next best thing for your hair.”

Celebrities, influencers, lifestyle bloggers promote the brands of hair companies and market to us. And it’s easy to fall for. Our role models wear these styles. Actresses and singers have had hair styles named after them, and have come to be identified with some. Alicia Keys revolutionised the Fulani braids, particularly the zig-zag cornrows.

Rihanna inspired the red hair trend in 2010 and later the pixie cut in 2012. Nicki Minaj is known for colourful weaves, Anita Baker, Bob Marley, Grace Jones, the examples are inexhaustible. With so much information being fed to us by the media, one trend, two steps ahead of the other, a style, technique or pattern could simply become the present trend.

So, whether you choose to have a braided fringe or a knotless braid, Bob Marley box braid or a regular Ghana weaving, yarn twist or a kinky all-back, Indian or Peruvian hair, Brazilian or Chinese, bone straight or curls; or perhaps you prefer to simply style the natural hair; locks to twists, accessorised with beads, cowries and what not, at the end of day, there will be a new trend, a newer preference or a supposedly better ideology. The fuss is all about competition. Hair choices for one of my friends is the pride of her womanhood; for the other, it is about classism. For me, as always, it is choosing comfort over style. What is your preference?

Sybil Fekurumoh is an agro-consultant and freelance writer that’s passionate about literature and books. She writes poetry in her spare time and publishes a biweekly newsletter (Soft Pallet Newsletter) focused on tech, politics and culture. You can find her on Facebook as Sybil Okubo Fekurumoh and on Instagram and Twitter as @toqueensaber