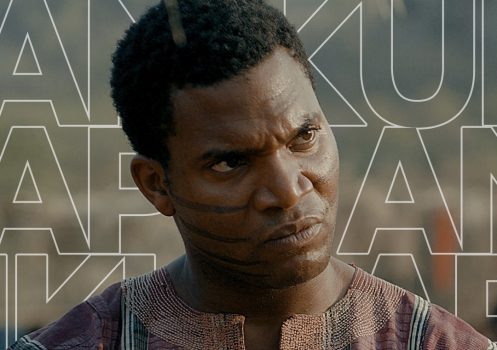 The bottom line is that Anikulapo is, by Netflix-Nigerian standards, a dutiful breed of culture-inspired picturesque filmmaking. If you would overlook its sometimes insecure pace, and sometimes unconvincing hero, and short-term hero worship of the titular character, you should watch it and go to bed feeling momentarily sated…

In Anikulapo, Kunle Afolayan combines Yoruba mythology with sociocultural ethos. The blend runs over a dated background, over two hours, and over bifurcated phases of plot. In the opening scene, what looks like a peep into destiny, a mystical bird resurrects a blood-faced young man. At this point, we don’t know what is going on, until we watch the story—the winding, energetic backstory—unfold. But before then, the narrator, the voice of an elderly priest, treats us to lore about how Yorubas deal with their dead and unveils the akala bird as a potential resurrector. This draggy, somewhat nostalgic pre-storytelling is reminiscent of the folkloric opening in The Figurine: Araromire, an older film of Kunle Afolayan’s corpus. Only that, the 2009 thriller, for most of its succeeding scenes, amplifies the mythic and macabre more often, despite the overarching modern atmosphere.

Anikulapo has an okayish plot. Its protagonist, Saro, a quirky aso-ofi weaver, arrives Oyo where he finds home and secures favour in the sight of Awarun, one of the town’s nobles. An older, flirtatious woman, Awarun becomes sexually intimate with Saro, and rewards him with a job and comfortable living. Soon, Saro realises that he is not the only young man in a situationship with Awarun, and he becomes displeased and disturbed. Awarun tries to pacify him and recommends his services to the royal household. One of the royal daughters, Princess Omowunmi, has a crush on Saro and talks to her mother about it. However, a steamy affair develops between the youngest wife, Queen Arolake, and Saro. Following brewing suspicions and warnings from Awarun, the youthful pair (Saro and Arolake) decide to leave the kingdom and set up their lives elsewhere. As the couple orchestrates their departure, they run out of time and out of luck. But it is for a while. It appears as if the ending is headed for a catastrophe after the king orders the lynching of the treacherous Saro.

When you reach this point in the film, you are reminded of the story’s jittery pace. It’s rather a subconscious reminder. You fear the end of Saro is anytime soon, and that would mean a final farewell to the film as well. But when you realise there is still over an hour to cover in time, you are convinced of a lifeline, something, anything to keep Saro’s existence prolonged. And that is what happens.

This is where the introduction of the mystic, talking bird and its small, gourd-like charm become a desirable stopgap. It doesn’t really make plausible sense to think of being saved in that manner, but the optimistic efforts of a love-struck, elopement-inclined Arolake must come to fruition and do so through some remarkable deus ex machina. Actually, it is ironic that the bird intends to leave the young man deservingly dead but achieves the opposite when it escapes Arolake’s attack, leaving its gourd behind. That marks the end of phase one, that very point at which a lifeless Saro gets reanimated.

Kunle Afolayan’s depiction of the akala bird jogs one’s memory of the phoenix in Greek mythology. Its western counterpart has a self-regenerative regimen which makes it a cultural totem of longevity and resurrection. So much is the significance of the phoenix that it is associated with the resurrection of Christ in Christianity.

The second unofficial phase of Anikulapo begins in a seamless, unnoticed manner that does no harm to the progression. With Arolake picking up the gourd and helping Saro, both navigate the forests. Far away from their homeland, the couple seeks refuge in the house of an aging hunter in a town named Ilu Ojumo. Here, they re-encounter fortune after Saro uses the charm to bring the hunter’s son back to life. It does not take long before the entire town, including the king and chiefs, endorse their sojourn. Saro now gains popularity as “Anikulapo,” literally, one who has death in his pockets, one who has control over death.

Like the archetypal hero in tragedies, Saro grows hubristic. He chucks his modesty for greed. Over the next few years, he has taken two more wives, seemingly the result of an abuse of power, both of whom have produced offspring for him. Arolake, who is childless, her position as favourite eschewed, becomes an object of ridicule in the household. Being off good terms with Arolake is really the last straw.

When Saro is summoned to resurrect the king’s dead son, an heir apparent, he obstinately demands the king’s burgeoning daughter as a wife in return. This soils the relationship between him and the king, but the royal household is left with no other choice than to accede. However, unknown to Saro, his powers are gone. As the reality of Arolake’s departure dawns on him, he discovers that the charm no longer has potency and correctly suspects his beleaguered wife for throwing out its content. Things are, however, to go south for him as he fails to bring the prince back to life and faces the king’s capital punishment. Anikulapo ends with a cliffhanger, with the mystic bird returning. Does Saro really come back to life? Should we expect a sequel?

One supposes only the Golden Effects Pictures boss, Afolayan, would have the right answers, but before then, a cliffhanger would be imagined as a mask for indecision. In the future, should the filmmaker decide to rake in more money by imposing a sequel, it would be accepted. Or, the filmmaker could decide against it and nobody would complain.

Apart from this open ending which doubts the clichéd Western framework for tragedy, other factors fall in place, maybe by coincidence. So it seems. The protagonist’s qualities of nobility (though the nobility surfaces in the film’s second half and is rather skimmed than explored, making the role a tad disagreeable): diligence, attractive outlook, confidence, charisma, and a potential for endurance in adversity, are traits we have seen in characters like Oedipus and Othello in Sophocles’ and Shakespearean plays, respectively.

For Okonkwo in Chinua Achebe’s Things Fall Apart, his Achilles heel is the fear of failure and weakness. For Saro in Kunle Afolayan’s film, it is the lust for more power and women. It only takes a modicum of power to unravel this lust. Again, Saro’s backstory is a grass-to-grace one. Having survived the ordeal of being forced to work off his father’s debts, this character parallels Okonkwo, as the latter has also worked hard to wash off the stigma of his predecessor’s indolence.

Then, there is the use of soothsaying and Ifa divination as a means of revealing the future. Tragic heroes in literature, such as Shakespeare’s Macbeth and Ola Rotimi’s Odewale, have had their fortunes foretold through acts of divination. This sense of divination in Anikulapo, as it were in literary forebears, is taken for granted by the Ilu Ojumo chiefs until it materialises.

Anikulapo is embraceable. The title is iconic, with a tinge of international appeal, as it readily brings to mind legendary Afrobeat singer, Fela Kuti. The postmortem ubiquity of the artiste-cum-activist is undeniable, as he has been venerated by Western fans through Hollywood productions like Finding Fela (2014) and Fela! (a musical). Although there seems to be no intended connection between the film’s hero and Fela’s life, both personas are largely promiscuous.

Kunle Afolayan wants the favour of the Western audience, and this suspicion is even corroborated by the casting of British-Nigerian actor, Hakeem Kae-Kazim, as Oba of Ilu Ojumo. Way back in Citation (2020), Afolayan played the same politics through Haitian actor, Jimmy Jean-Louis. It is even more interesting, perhaps, that the filmmaker reprises the mime acting of Citation‘s Yomi Fash-Lanso in Anikulapo‘s Hakeem Kae-Kazim.

A number of known Yoruba-Nollywood faces populate the film. This includes Kunle Remi, Bimbo Ademoye, Sola Sobowale, Taiwo Hassan (Ogogo), Fathia Balogun, Kareem Adepoju, Adebowale Adedayo (Mr. Macaroni), Dele Odule and Yinka Quadri. They add verity to the traditional posture of the film. Not so much about Kunle Remi’s acting in the film is takeaway, though, as his skill here is arguably less passable than in A Najia Christmas (2021). For instance, at that very point when Saro’s pride is believed to have skyrocketed, following his rape of Omowan, we expect him to become more vociferous and annoyingly full of himself. The entire town should notice this and become repulsed. Rather, unfortunately, less time is dedicated to the development of his alter ego.

Anikulapo is home to refreshing themes and devices. The meticulous use of dramatic irony deserves applause. While Saro is emasculated in his relationship with Awarun in Oyo, he enforces his masculinity over Arolake in Ilu Ojumo. Also, the Arolake in Oyo boasts a queenly status and is the cynosure of the king, but in exile, her feminine authority wanes as she loses the emotional grip of her new man.

One theme that holds our attention for some time is matriarchy, and this is rather slyly wired into the role of Awarun. It is apparent in her reputation for using, as sexual objects, able-bodied young men and compensating them with money and gifts afterwards. Other themes in Anikulapo include jealousy, as we see amongst the Oyo royal wives; child marriage, as in the case of Arolake who is betrothed at a young age; and betrayal of trust as ultimately observed between Saro and Arolake.

The bottom line is that Anikulapo is, by Netflix-Nigerian standards, a dutiful breed of culture-inspired picturesque filmmaking. If you would overlook its sometimes insecure pace, and sometimes unconvincing hero, and short-term hero worship of the titular character, you should watch it and go to bed feeling momentarily sated.

Adedamola Jones Adedayo is a teacher, writer, and literary arts & popular culture critic. He is particularly interested in African writings, films and music. Reach him at adedamola767112@gmail.com.On Facebook, he is Adedamola Jones Adedayo, on Instagram @adedamolajonesadedayo, and on Twitter @AdedamolaAdeda4.