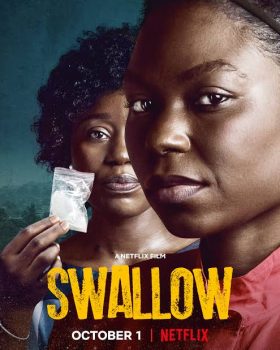 Swallow is a historical drama, but its story is not dependent on any significant event peculiar to the period in which it is set, neither does it care much about evoking nostalgia.

It is easy and profitable, when planning to make a film adaptation of a book, to opt for a book set against the backdrop of a significant historical event. It is a safety net; if the story does not sell, the historical event and nostalgia will. With his latest offering, seasoned director, Kunle Afolayan, sells a different choice. Swallow is a historical drama, but its story is not dependent on any significant event peculiar to the period in which it is set, neither does it care much about evoking nostalgia.

Swallow is based on the novel of the same title written by Sefi Atta, author of critically acclaimed novel Everything Good Will Come which won the 2006 Wole Soyinka Prize for Literature in Africa. The screenplay itself was jointly written by Afolayan and Atta. Released on Independence Day, 1st October, 2021 as a Netflix Original Film, it stars singer, Eniola “Niyola” Akimbo as Tolani in the lead role and Ijeoma Grace Agu as Rose in the major supporting role. It boasts of other reputable actors in Deyemi Okanlawon, Eniola Badmus, Chioma Chukwuka Akpotha, Omotunde Adebowale David, Kunle “Frank Donga” Idowu, Mercy Aigbe, Joke Muyiwa, Kevin Ikeduba, Kehinde Segun Remi and Afolayan himself. There are also appearances from Big Brother Naija’s Offiong “Thin Tall Tony” Edet Anthony.

Swallow follows the story of Tolani as she struggles through economic hardships in 1980s Lagos with her friend and roommate, Rose. Desperate to escape poverty, Rose gets involved in drug smuggling. Tolani must decide whether to join her friend on this dangerous path, and if she chooses to do so, she must learn to swallow wrapped illegal drugs. The story gets its name from here.

The film opens as Tolani returns to her hometown of Makoku in August of 1985. A lot is happening in the background, with only one intention: to paint a clear picture of the setting. For this purpose, the extras are Afolayan’s major conduit pipe, and this is one of many areas where his directing often exceeds that of his peers. Unlike several Nollywood films where the extras put on scene to emphasise the setting are generally unnecessary and distractingly awkward with their unforgivably cringeworthy acting, the only thing Afolayan’s extras in Swallow may be guilty of is overacting. In terms of the time and scenery, Swallow is not as immersive as Tunde Kelani’s Ayinla or as bold as Izu Ojukwu’s ’76. It is not even as seamless as Afolayan’s very own October 1. But it is not poorly done, either. Barring a few misfits, including a song that might not have existed in 1985, the film is comfortable in its subtle presentation of the elements of the time.

To be fair, the film’s focus is its story, rather than its setting. Even when it references the infamous War Against Indiscipline, it is merely an ode to the times, rather than an integral part of the plot. The events of Swallow could very much have happened in today’s Nigeria.

Its themes of poverty, corruption, patriarchal power and misogyny, inherited from Atta’s book but still very relevant today, are its standout quality.

But, although, it successfully portrays how much these issues have been normalised in the Nigerian society, its perfunctory approach does not allow for the profound effect that it aims to achieve.

At first glance, the cast looks promising. Because of the storytelling in her music videos and her tendency to act in them, it is easy to expect great acting from Niyola as the lead. However, though she could have been worse, she cannot be said to have done a splendid job. Her narrative voiceover is boring and tiring, and her portrayal of Tolani is passable at best, even less encouraging than Temi Otedola in Citation—Afolayan’s previous attempt to make an actor out of a non-actor. She tries, but she is never able to hit the right spot. Okanlawon relaxes well into his role as Sanwo, and Chukwuka Akpotha’s warmth as Mama Chidi is a refreshing distraction from the harshness of the story. The rest of the cast puts in a decent shift. But the only really remarkable actor in the film is Agu, an undeniable show stealer. She is flawless as the confident, streetwise, daring and unashamed but ultimately scared and desperate Rose plagued by bad decisions. It is no surprise; Sefi Atta has a way of creating complex female supporting characters who dominate the story, with the protagonist mostly playing the role of the storyteller.

The story in Swallow is really Rose’s, and even though the plot makes that clear enough, Agu makes sure you never forget it. She brings to life the character of Rose in such a manner that holds your attention and makes you frustrated at her but also sympathetic enough to understand her, root for her, and be genuinely hurt by the consequences of her choices.

With Sefi Atta still involved in the screenplay, there is that skillfulness in the progression of the plot, laced with Atta’s fiercely feminist lenses that Chimamanda Ngozi Adichie praised, and her distinct style: a slow-burning narrative that keeps going with you unsure where it will lead, but at the same time never really losing interest.

You do not come out of this movie feeling amazement, excitement, rage or any extreme emotion. But you have no regrets whatsoever. It is not Afolayan’s best work. Yet, it is still a very good movie. And as far as adaptations go, although it might have been nice to see some more landmark moments from the book, Swallow is no disappointment. But it is not as powerful as it should have been.