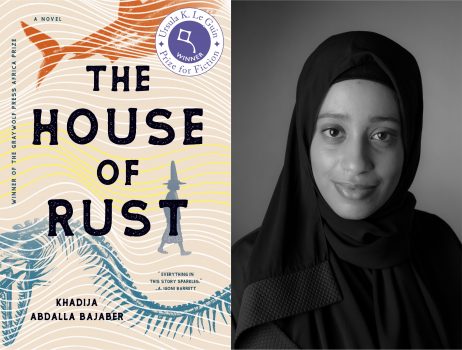 Khadija Abdalla Bajaber’s “The House of Rust” is a Story of Myths, Fantasies and Quests

The House of Rust is a novel of many seasons. Bajaber’s slippery narration is telling, but it fascinates and confuses by turns…

The quest trope is one of the oldest in global literature. Some of the oldest works in the Western canon such as Dante’s Inferno, Chaucer’s Canterbury Tales, and Miguel de Cervantes’ Don Quixote, the first novel in the European tradition, are defined by quests and journeys. The mythologies of many African cultures are filled with stories of quests for self-redemption or reasons such as family, wealth, marriage, war, etc. Khadija Abdalla Bajaber’s The House of Rust tells the story of a quest, with a generous scooping of Hadhrami and Swahili culture.

(Read also: Makumbi’s A Girl is a Body of Water is a New Height for the African Coming-of-age Novel)

The story in The House of Rust largely takes place in Kenya’s coastal city of Mombasa, with its vibrant Swahili culture and fishing communities. We meet our protagonist, Aisha, an innocuous teenage girl, and the daughter of a fisherman. Her father is always absent and the girl boards with her grandparents who are quirky characters. Her deceased mother is largely absent in the story and is only seen through Aisha’s occasional regurgitations.

Through Aisha’s eyes, we learn about the close-knit community and the myths and the culture, as well as the role storytelling plays in the life of the community. Aisha’s largely predictable life is broken when her father doesn’t come back from fishing after five days. A large part of the novel then takes place as Aisha’s quest to find her father. And this is where the novel takes a serious turn towards fantasy.

Aisha goes to sea in a boat made out of a skeleton to find her father. There, she meets and interacts with all sorts of creatures and gets embroiled in a long fight—a la Moby-Dick—with a sea creature, Baba wa Papa, king of sharks, whose defeat leads to her father’s rescue. Here, the story gets exciting. Bajaber is at her best when she tells the story of sea adventure.

The suspense picks up and the reader feels drawn to the intimations of unknown dangers in the horizon. “There are things in the sea that could eat you alive,” Hamza, the talking cat, tells Aisha. The undergirding conceit of the novel works in this section of the book. But things get increasingly even less plausible when Aisha returns from her quest.

There are a few levels in which this novel did not work for me, however. On the first level, the fusion of Aisha’s supposed coming of age, and a fantastic adventure involving talking animals and birds, stunted the novel’s character development. Aisha is only identified by her seaborne battles, and there is little else to her after the first few chapters.

The animals and creatures are too one-dimensional to sufficiently satisfy us. At one point, one begins to wonder whether one is reading an outright fable in the mold of say, NoViolet Bulawayo’s Glory, involving only animal characters, or a story involving real humans, since whole sections of the book are dedicated to animal characters. Increasingly, it becomes hard to tell the animals apart.

The appearance of talking crows in the second chapter of the novel is somewhat jarring, especially after the author has spent quality time foregrounding Aisha and the rest of her family in a realistic world. There is no hint (prior to the second chapter which is dedicated entirely to a fable-like focus on animal characters), as we may find in standard magic realist novels, about this fabulist aspect of the novel.

This is no indication of the stylistic wiliness of the author, as it might seem; it, in fact, poses a serious problem for readers after the first chapter. Perhaps, it is in the manner in which the fantastic side of the novel unfolds. From the first sentence, “When Aisha was younger her father used to take her out to the sea,” one approaches the novel with the mindset of reading a coming-of-age story grounded in contemporary socio-cultural realities, which the story is to an extent, but the introduction of fabulist devices has a disruptive effect on me and waters down the assumption of the novel’s direction.

There is nothing plausible here, especially since we have been told earlier in the story that Aisha is carefully guarded and not allowed to venture too far, unless with a companion, even if it is a small boy, as is seen with her use of the boy, Omar. It is important to note that there is nothing outrageous about this watchful guardianship of young women in the largely conservative Hadhrami culture. However, the novel’s juxtaposition of a young girl’s desire to get her father back and an entire raucous circus of animals helping her, somewhat unseeingly, maybe only attractive to certain kinds of readers.

On the second level, The House of Rust bucks the expectations of even a perennial magic realist reader. Magic realism, as we understand it, fuses reality and elements of magic in ways that blends perfectly with realism. Perhaps it is the fault of the publishers to have marketed this book as “magic realism.” Is it? I think not. This is a fable at best; but a confusing one. Over the years we have seen several novels with magical realist devices in Africa, from Ben Okri’s The Famished Road to Ngugi wa Thiong’o’s Wizard of the Crow.

Okri’s novel tells the story of a young spirit child born into a poor family struggling to make ends meet. Same with wa Thiong’o’s novel, which is grounded in the autocratic political reality of Africa states. Magic Realism luxuriates in hyperbole; the idea of reality as hyperbole. In the realm of the hyperbolic, genuine social concerns are tackled with commendable deftness and mastery. The House of Rust is not very convincing in this respect. The novel could have worked better if it were an outright fable or a realist coming-of-age story rooted in the socio-cultural realities of Mombasa. Either way, it has to be something; it cannot stand in the realm of the in-between.

Bajaber is a visibly talented storyteller, with a mastery of words that delights. In the poetry of her storytelling, I often struggled to keep track of events as to who is talking to who and the myriad animals floating in and out of the narration. But her use of words is no less captivating. On the first encounter, the scholar’s cat “stretched a brazen yellow over the step like a long, dried banana leaf.” The joy Hababa finds in sharing secrets is described as wrapping “herself in the aliveness of a thousand different actors performing the daily dramas . . .” There are numerous other tiny crystals of the writer’s ability with words.

The novel tackles themes of love, belonging, religion, cultural awareness, storytelling, and the reality of self-discovery. In the many actions of the novel and in Aisha’s intrepidity at sea, we find love overarching everything. It is also in the outlandish manifestation of Aisha’s quest that she discovers her true mission, for this mission also represents that of her family and culture over the centuries.

This is why her interactions with the cat represents, I daresay, one of the most intellectually edifying sections of the novel, and also one of the most revelatory of the nature of religion and mythmaking. The novel’s several sea encounters, no less the galactic one at the center of the story has an underlying overtone of the struggles between the strange cultural pull of unknown places and the need to maintain what is known within an old culture.

The House of Rust is a novel of many seasons. Bajaber’s slippery narration is telling, but it fascinates and confuses by turns. In many instances, the reader finds himself casting about in the dark for something concrete to hold on to in the story. Everything appears to be geared towards creating imaginative strangeness without adequate explanations, putting the reader in a place in-between one literary form or the other. This is the danger of novels like this.

The difficulty of criticism lies in the fact that some narrative shortcomings may be explained away as the common feature of the magical and the fantastic. There is talent in the writing, no doubt, but this boiling potpourri of myths, fantasies, and quests leaves the reader hollow and hanging.

Chimezie Chika’s short stories and essays have appeared in, amongst other places, The Question Marker, The Shallow Tales Review, The Lagos Review, Isele Magazine, Brittle Paper, Afrocritik and Aerodrome. He is the fiction editor of Ngiga Review. His interests range from culture to history, art, literature, and the environment. You can find him on Twitter @chimeziechika1.