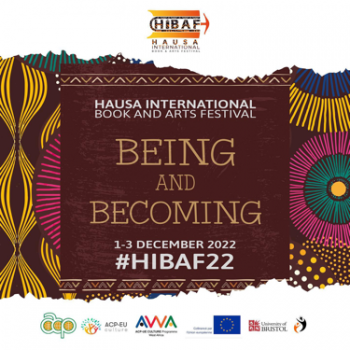 This year’s edition of the festival aims to use virtual technology in exploring, “language and identity in the African literary space.”

The Hausa International Book and Arts Festival (HIBAF) has announced its second edition with the theme, “Being and Becoming.”

The festival which will range from both virtual to physical activities will be held in Kaduna, Nigeria from the 1st to the 3rd of December, 2022.

Open Arts, the organisers of HIBAF 2022, say that this edition aims to archive and digitise, “all the outputs from the festival and the constellation of activities around it as a digitally reconstructed fusion of art, literature, performances using VR technology. The festival will be archived as a travelling VR experience in which audiences anywhere can use VR headsets to experience the festival.

The VR experience of the project will include the curated festival experience; a feature documentary on identity and language; a photo-essay documenting the vibrant existence of an unbridled literary tradition among women writers writing in Hausa language in northern Nigeria.”

This year’s edition of the festival aims to use virtual technology in exploring, “language and identity in the African literary space.”

Curator of the festival, Sada Malumfashi, noted that, “Knowledge in the field of Hausa origin has been confronted with missing links or gaps with very little known about the identity of a Hausa person. What language did the ancestors of the Hausa person speak five thousand years ago? These and many of such questions and interceptive queries would be answered in this second edition of the Hausa International Book and Arts Festival (HIBAF22) by linking and connecting arts, language and identity through analysis of the processes that give birth to experience.”

Register here for the events.