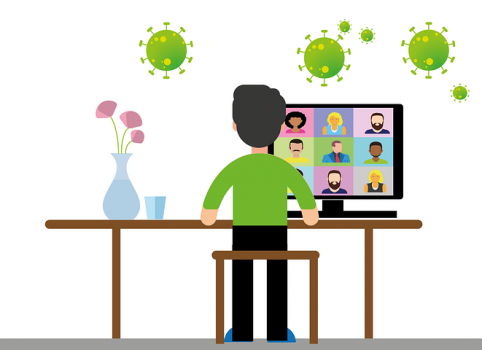 Will the Virtual Culture be the Future Working Environment of Africa?

Beyond the deprivations that came with the pandemic, Africans would agree that they learnt huge lessons from it. One of those major lessons is the ability to adjust to and adopt new ways of working outside the conventional methods they are used to. The pandemic could very well serve as a timely message about the need for African countries to embrace virtual world of works. It also highlights the need for a flexible functional team that could readily embrace the virtual world of work as a needed replacement for a physical one.

Since the pandemic, many rules of engagement have changed. Africans are currently drifting towards virtual work than physical work. As the dust of the pandemic is settling, and social distancing guidelines are being relaxed across the continent, it is becoming  visible that large companies are already seeing the possibility of effectively blending the physical and the virtual worlds of work. Quite a number of African organisations  have understood that a rapid migration into virtual work is the future of work, pandemic or not. Hiring and working virtually within and outside African countries is no longer a strange but a proven and reliable trend.  A survey conducted in South Africa shows that 20% of its workers are willing to relocate and work virtually. In that same survey, about 60% of workers across nine global markets confessed their willingness to relocate for virtual work now than they were prior to the pandemic. Another research carried out by pew shows that about 59% of Americans as at 2022 now work from home. Even after the pandemic, companies such as Chevron delayed its workers from returning to their offices for many months.

These statistics are rising speedily because of the benefits that are attached to the system. Taking an unbiased look at the numerous advantages that are embedded in virtual work, it is undeniable that working virtually dresses an individual with more flexible working hours. People can work at their convenience and still be productive. With this, people get to earn valuable skills such as adequate time management, can follow schedules more strictly, prioritisation, learn effective teamwork, and so much more.

Interestingly, a report by International Finance Corporation (IFC) in 2021 estimates that by 2030, over 230 million jobs in Sub-Saharan Africa will mandatorily require digital skills, presenting a 130 billion dollars opportunity for investors and education providers to train the future workforce. This workforce must be willing to adapt and embrace the virtual world of works. This demand would definitely not be a challenge as Africa is undoubtedly occupied by people who are willing to work virtually to ease off the stress associated with physical work.

With a population of over 1.2 billion people, studies reveal that modern Africa can be said to have embraced the virtual world of works as it now has over 80 million citizens who have a virtual work arrangement. Andela’s African Developer Survey shows that over 75% of African developers are currently working in a virtual environment, and about 90% are fully interested in taking a full-time or part-time virtual job. Perhaps the remaining 10% would show similar interest in the future. About 32% stated that their reason for choosing to work virtually is to focus on work. People may not be able to work effectively under physical working conditions due to the distractions of having to be involved in a lot of physical preparations to appear in office.

After the training sessions for Africa Code Week Train-the-Trainer campaign was made virtual due to the pandemic, in 2020, a survey conducted by DreamOval Foundation showed that many of the teachers involved in the training appeared to be more interested in online training, and were willing to continue with virtual learning. Likewise, Ghanaian officials now believe that there’s a need for virtual teaching to continue even after the pandemic as having to travel to attend training sessions could be an obstacle to teachers’ participation.

In 2021, Google made a pledge to invest 1 billion dollars over five years to give room for faster and more affordable Internet access, and also to support entrepreneurship in Africa. This investment move is mainly to support digital transformation and ensure an improved connectivity and access by developing infrastructures such as strong submarine communication cable that will connect South Africa, Namibia, Nigeria and St Helena with Europe. This deal also coincides with Google’s pledge to train around 10 million young Africans and small-scale business owners in digital skills. If this development is achieved as said, there is likely to be less limiting factors to the virtual world of works as there is in this present Africa.

Another major constraint Africans are striving to eliminate is the absence of electricity. There is the fight towards ensuring that electricity becomes accessible in many countries. Currently, African countries such as Gabon, Tunisia, Morocco, Egypt and Algeria have 100% access to electricity. In fact,  Burkina Faso is currently leveraging on solar energy and battery storage which explains why it enjoys the best solar radiation in West Africa. To further establish this fact, one of the goals of the World Bank that stands in its priority list, is to help Africa achieve universal electricity access by 2025 with a strong focus on encouraging clean and renewable energy solutions. With the issue of electricity solved and a strong digital connection established, perhaps many organisations will consider the numerous advantages associated with the virtual world of works.

Leveraging on media provisions such as video conferencing, phone discussions, detailed email updates and text messages can serve in effectively enhancing communication in virtual work. If these obvious constraints are eliminated, perhaps, the  world of virtual work would find its way into being Africa’s permanent future working environment.

Many businesses are going to consider opting for a virtual working space in the future. Especially for small, start-up companies, going virtual provides a less expensive operating system, relative to physical establishments. For overpopulated cities such as Lagos, Kinshasa, and Cairo with high rates of traffic, working virtually becomes the best option.