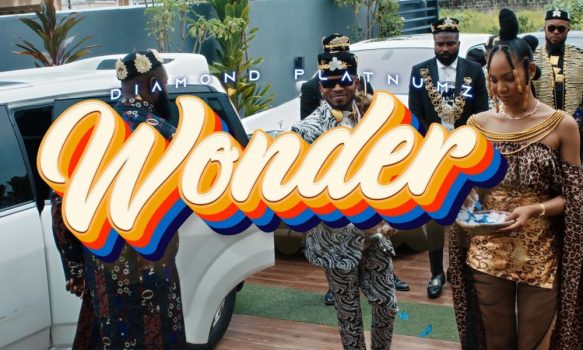 In Visuals for “Wonder,” Diamond Platnumz Finds Love in Lagos

…this time, Platnumz decides to leave the beautiful safaris in Tanzania to travel down to Lagos, Nigeria, the center of excellence, and Africa’s entertainment hub, for this video shoot…

The moment you hear that voice whispering “Wa-sa-fi” on a track, you immediately know Tanzania’s Diamond Platnumz is about to make an entrance. The “Gidi” singer who is fully adept at singing and dancing and does both incredibly well has, over the years, incorporated this skill set in his artistry and stage craft, ultimately singling him out as one of the most notable performers in Africa. Platnumz is considered one of the continent’s brightest superstars, a dedicated ambassador, and a national icon. He is also one of the most viewed African artistes on YouTube. His videos combined have garnered nearly 2 billion views in total.

Born Nasibu Abdul Juma Issack, in a humble neighbourhood of Tandale, Dar es Salaam, Tanzania, Diamond Platnumz has proven to not only be concerned with the creative aspects of music alone, but also the business side of it. He is the founder and chief executive officer of Wasafi record label, Wasafi TV, Wasafi fm, Wasafi film production company, and Zoom Extra. This song. “Wonder” was produced by S2kizzy, and is off Platnumz’s First of All album which was released under label imprint, WCB records.

It is a beautiful thing to see Africans embracing their cultures once again, after much turbulence and bad blood that seemed to have rocked the continent and wreaked disharmony amongst its citizens in recent years. There has never been a better time for Africans all over to unite as one. Now more than ever, there is the need for Africans to come together.

Millennials like myself and an older generation of viewers will discover immediately after watching the opening scene of this video that the inspiration was drawn from Eddie Murphy’s 1988 classic motion picture, Coming To America. Platnumz is seen on a private air craft seated alongside what is believed to be his confidant. They are both fully dressed in luxury animal skin clothing. They arrive Lagos heavily escorted by a large convoy and entourage. They eventually arrive at his potential in-laws’ house.

Surprisingly, this time, Platnumz decides to leave the beautiful safaris in Tanzania to travel down to Lagos, Nigeria, the center of excellence, and Africa’s entertainment hub, for this video shoot. However, Platnumz has always been a familiar friend of the Nigerian music industry, and he has done numerous collaborations with a number of Nigerian artistes such as Davido, Patoranking, Iyanya, Kcee, Bracket, Waje, Flavour and Psquare, to mention a few.

One can only wonder how video director, TG Omori, comes up with these innovative ideas and unique concepts for music videos. The “Commander” video director invites Nollywood’s legendary, charismatic actor, Jide Kosoko, to play Platnumz’s fictional father-in-law. Kosoko thrills fans and viewers with his superb acting skills and signature grumpy and disgruntled facial expressions. He is reluctant to give his fictional daughter away to the singer. He takes his time to assess, and heavily scrutinise the singer, giving him yet another acrimonious look, before he finally approves him a worthy suitor for his daughter. This scene is an apt portrayal of the attitude typical of fathers everywhere whenever a suitor they are unsure of comes to make their intentions known to marry their daughters.

The video ran for a playtime of three minutes and thirty seconds. And from 0:01 til 3:30, it proved itself to be a complete saga!

The bongo singer definitely knows how to make a lady feel special, and he demonstrates this consistently in both his lyrics and his videos. “Girl you fine and too sweet, let’s do this, with two kids,” he sings. The lucky muse who played the singer’s love interest is showered with affection all through the video. After her father gave his blessings to the couple, Platnumz spends some quality time alone with her.

2:44 playtime started one of my favourite scenes where the pair are seen enjoying a romantic evening stroll while holding each other’s hands, and unknown to Platnumz that his lover had planned a special surprise for him, hiding some traditional dancers at the rendezvous. When the pair arrive, the lady calls them all out at exactly 2:51 playtime, and they all begin to entertain the singer, fully dressed in their traditional attires. Several yellow passenger buses popularly called “danfo” in Lagos were positioned at the location. This concept added aesthetics to the video.

Perhaps, my best scene in the entire video was at the beginning, around 0:12 and 0:13 playtime, where Omori captured, in a medium-shot, the singer’s lover in distress, worried and anxiously waiting on her lover’s arrival. This shot was so beautifully taken that my heart melted. The video director added what seemed like a glitch or slow-motion effect that further intensified and triggered emotions in me. At this point, the video could do no wrong.

This is a special video, and, with it, Omori keeps raising the bar high for other directors to follow.

Omowale Michael Bokinni is a trained Cinematographer and Screenwriter. He is an alumnus of the prestigious Royal Arts Academy Lagos. Passionate about all things music, movies and entertainment in general. He is also an actor who has featured in a number of Nollywood movies. Most recent; The Royal Arts blockbuster “Bitter Pill.” Instagram @omowalebokknni. Twitter @bokinnio