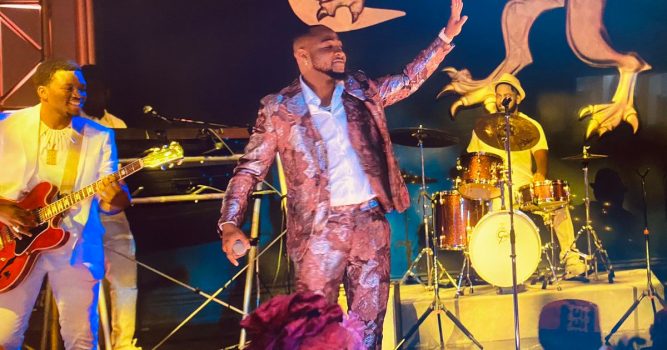 On June 25, 2021, Nigerians on Twitter struggled (in vain) to contain their ecstasy as the trailer for The Harder They Fall, a forthcoming cowboy-themed movie starring Idris Elba, Regina King and LaKeith Stanfield, premiered on multiple platforms. The major reason for their excitement, however, was not necessarily the unveiling of another action film with black leads, nor was it the fact that Elba would light up screens once again with another commanding performance, per usual. The reason for the buzz was the song used in the trailer: Fela Anikulapo’s “Let’s Start”, off the live album Fela With Ginger Baker – Live, was playing in the background!

On March 4, 2021, Coming 2 America premiered across the world. For Nigerians, one of the major talking points was the party scene where Nigerian pop star Davido, one of the biggest music acts in the world at the moment, mounted a podium while wearing a floral suit to perform his hit single “Assurance”. Three other Nigerian songs featured in the movie: Tiwa Savage’s “Koroba”, Tekno’s “Waka Waka” and “Coming 2 America” (which featured Burna Boy) appear on the Coming 2 America Original Motion Picture Soundtrack. 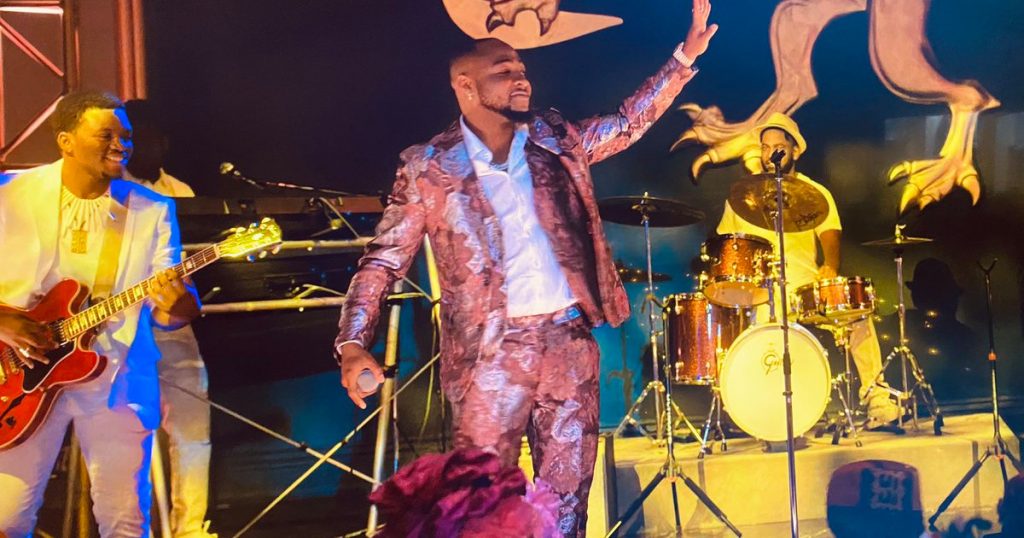 The excitement is not out of place, but contrary to speculations in certain quarters, these recent insertions of Nigerian music in Hollywood films are by no means a novelty. Hollywood has always depended on Nigerian music for flavour. Over the decades, Nigerian music has influenced the sound and rhythm of America’s biggest blockbusters. Here is a list of Nigerian songs that have previously appeared in Hollywood movies:

“356 Is My Number/The Message” is a song composed by juju music legend King Sunny Ade, from the 1982 album Juju Music. The song is played in Breathless, a 1983 drama film starring Richard Gere.

“African Queen”, the song that cemented the solo career of Nigerian pop legend 2face Idibia, appears in Phat Girlz, a 2006 romantic comedy film directed by Nnegest Likke and starring American comedienne Mo’Nique. The song plays in the final scene of the movie, where Jazmin (Mo’Nique) reconciles with her lover Tunde (played by Jimmy-Jean Louis.)

“Anybody” is a song written and performed by Grammy winner Burna Boy, off his 2019 album African Giant. The song is played in Season 5, Episode 3 of the American comedy series Ballers.

“Askamaya” is a pop song composed in 2018 by Teni the Entertainer. It appears in Season 5, Episode 7 of the American comedy series Ballers.

2017 had Nigerian superstar Wizkid experiment with a new direction for his sound, and one of the songs that reflected this was “Daddy Yo”, a reggaeton-themed track off his third studio album Sounds From The Other Side. The song plays in the 2018 Hollywood sci-fi film Pacific Rim: Uprising, specifically in a scene that is a montage of a party and the after-party chaos. The lead character, Jake Pentecost was played by Nigerian-British actor John Boyega.

Nigerian pop stars Tekno and Yemi Alade teamed up on “Don’t Jealous Me”, a song that appears on The Lion King: The Gift, a soundtrack curated by Beyonce for the 2019 remake of the animation film The Lion King.

7. Express Yourself – Nneka (Beat The World)

“Beat The World” is a song written and performed by Nigerian alternative artist Nneka. The track features Jamaican reggae artist Ziggy Marley, and it was specifically composed for the 2011 Canadian dance film Beat The World.

“Innocent” is a track written and performed by Burna Boy. It appears on Season 5, Episode 8 of the comedy series Ballers.

“Ja Ara E”, a song composed and performed by Burna Boy, appears on The Lion King: The Gift. The track draws heavy influence from Fela Anikulapo-Kuti.

“Je’nwi Temi” (or “Don’t Gag Me”) is a song composed by Fela Anikulapo-Kuti, from his 1973 album Afrodisiac. The track was part of the soundtrack for the 2007 romance film The Visitor, which stars Richard Jenkins and Danai Gurira.

Nigerian pop stars Mr. Eazi and Tiwa Savage lent their vocals to “Keys To The Kingdom”, a song which appears on The Lion King: The Gift, a soundtrack curated by Beyonce for the 2019 remake of the animation film The Lion King.

The late reggae giant, Majek Fashek, released a song called “Love and Affection” in the early 1990s. It appears on the soundtrack of Fool’s Gold, a 2008 romantic comedy film that stars Matthew McConaughey, Kate Hudson, and Kevin Hart.

“Maajo” is one of the songs that make up King Sunny Ade’s 1983 album Syncro System. It is featured in One More Saturday Night, a 1986 comedy film directed by Dennis Klein.

Burna Boy heavily samples Fela Anikulapo-Kuti’s music in “My Money, My Baby”, a song which features in the original soundtrack for the 2019 crime drama Queen and Slim, starring Daniel Kaluuya and Jodie Turner-Smith. The original song sampled by the Grammy winner is “Shakara”, a song off the album of the same name, composed in 1972 by Fela.

“Ojo Je” is a song from the album of the same name, released in 1985 by Nigerian singer Segun Adewale, who is regarded as the pioneer of a music genre called Yo-Pop. “Ojo Je” is played in Season 6, Episode 4 of the American TV series Homeland.

King Sunny Ade’s “Penkele” (off the album Syncro System) is featured in OC & Stiggs, a 1985 comedy film directed by Robert Altman. In a dinner scene, the juju music legend appears with his band, and with their electric guitars, they proceed to entertain the guests. This scene is one of the high points of this film, noted for its bizarre brand of comedy.

In 2017, Nigerian alternative act Santi collaborated with Shane Eagle and Ghanaian singer Amaarae to make the reggae-themed “Rapid Fire”. The song is featured in Season 5, Episode 7 of the comedy series Ballers.

Nigerian singer, dancer and comedian MC Galaxy ruled 2014 with his hit single “Sekem”, which also came with an accompanying dance move. The track is featured in a fast-paced scene in the movie Queen of Katwe, where Phiona’s mother Nakku Harriet (played by Lupita Nyong’o) struggles to sell maize in one of Katwe’s busy markets.

2013 had Davido in great form, dropping hits like “Gobe” and “Skelewu”. The latter appears in the 2016 movie Queen of Katwe, which is based on the true story of Phiona Mutesi who becomes a world chess champion from a small Ugandan town, and stars Lupita Nyong’o as well as Richard Oyelowo. “Skelewu” plays in the scene where Robert Katende (Oyelowo) encourages Phiona (Madina Nalwanga) to stick with his chess team.

“Star Signs” is a song composed by Nigerian alternative artist Odunsi (with vocal input from Runtown) off his 2018 album Rare. It is played in Season 5, Episode 7 of the comedy series Ballers.

“Sweet Love” is a song composed by Grammy winner Wizkid, off his 2017 album Sounds From The Other Side. It features in Season 3, Episode 2 of the comedy series Ballers.

“Who’re You” is a 1971 song composed by Fela and the Nigeria 70, which appears on the EP London Scene. The song plays in a minute-long montage scene in Season 2, Episode 4 of the Netflix TV series Narcos: Mexico.

“Yellow Fever”, composed by Fela Anikulapo-Kuti, is one of the tracks in the 1971 album Na Poi. It features as one of the songs in the soundtrack for Juda, an Israeli TV series based on vampires.

“Zombie” is a song and performed by Fela Anikulapo-Kuti, off a studio album by the same name, released in 1977. It was featured in Homecoming, a concert film based on Beyonce’s performance at the 2018 Coachella Festival.

The influence of the Naija sound has extended to gaming too, with Fireboy DML’s “Scatter” and Rema’s “Bad Boy Beamer” appearing on the EA Sports video game FIFA 21. “Kangpe”, a 2008 song composed by alternative artist Nneka (off the album No Longer At Ease) is also featured in FIFA 10. Nigerian music has been exported from time, it has always been mainstream, and that is not going to stop any time soon.