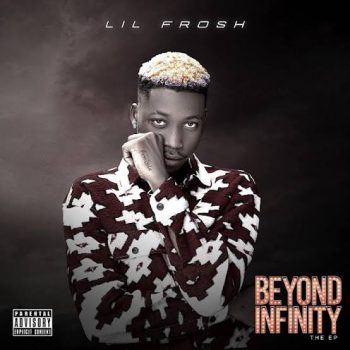 After more than three years of waiting, Lil Frosh’s fans and critics finally have something substantial and definitely less controversial to attach his name to with the Beyond Infinity EP. The title might have been prophetic, but ultimately it served little purpose…

When I searched the name “Lil Frosh” on the Internet before I penned this review, I was shown multiple images of a bruised lady who happens to be his ex-girlfriend. They filled the image section of the search output. These days, when Lil Frosh comes up in conversation, he is linked with assault. While he has tried to do some damage control, the reverse has been the case for him, his music taking the second spot.

Sanni Goriola, better known in the music circle as Lil Frosh, is a rapper, singer and a former Davido World Wide Music affiliate. He became a viral sensation in late 2018 via his Instagram freestyle videos and skits. One of these freestyles formed the bedrock of his debut single in the first quarter of 2019. The song “Firi Yahoo,” featured self proclaimed street ambassador, Small Doctor.

Lil Frosh alongside Joeboy, Dunnie, J. Derobie and 97 other musicians across Africa became the guinea pig for Mr Eazi’s enPawa Initiative in 2019. He got financial support, and the video to “Firi Yahoo” was shot for him by the music incubation company.

The boppy and Galala-centered track “Davido,” and Zlatan Ibile-assisted “Kagadaffi” were some of the tracks released before he was cupped up by Davido’s former ally, Aloma. By the time the deal between Aloma Music Worldwide and Davido Music Worldwide was announced in October 2019, the maiden track “50 Fifty” was already in the works. The minimalist video had Davido, Aloma, and Israel making cameo appearances.

The last quarter of 2020 was mired in needless controversy, court cases and some sort of canceling on social media for Frosh. This, in some way, hindered the single “Kole re body,” featuring Mayorkun, from flying.

2021 was heralded by the single “Omo Ologo” featuring his friend Zinoleesky and right now is his highest streamed song on Spotify. No wonder, it made the final cut for his extended play which he titled Beyond Infinity.

Beyond the irony in his name and what he professed, Lil Frosh has always stood for the street, the masses, and the downtrodden. His music is always spiced with stories, phrases, and pop culture familiar to the streets. He has also avoided singing in the English language, sticking to Yoruba in most of his songs.

He opens Beyond Infinity with “Study Me.” Centering on his self-inflicted controversy, he seeks for forgiveness from adversaries, friends and also urges them to respect his privacy. “Believe me when I say/I dey on DND ooo. Allow me enjoy my privacy,” he croons. The song explores the place of fame and its excesses so far in his journey. Hinged on Amapiano, it welcomes the listeners to a hippy-like flow which deliberately runs through the project. 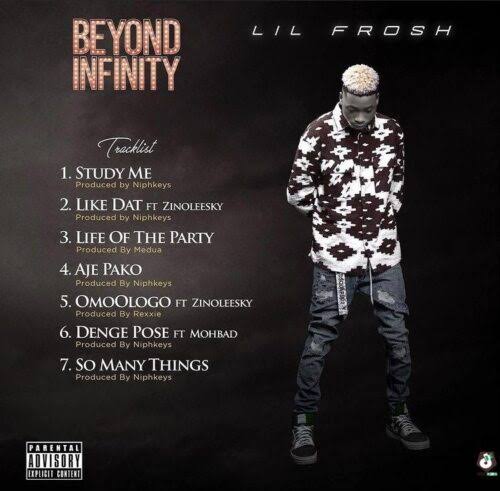 Buddy and Kudi’s end rhymes are similar on “Like Dat.” With a creative and over the top input from his bosom friend and fellow singer, Zinoleesky, he took the track to its pivot with his saccharine lyrics, excellent ad libs which in some way elevated the track to the status of his hit single “Omo Ologo.” “Like Dat” is laid on a stripped down Amapiano sound; however, it sounds like what you might have heard before. Not even Lil Frosh’s lukewarm and cheesy lyrics could save the day.

“Life of The Party,” just like the title suggests, is a party track with an excited and cocky Lil Frosh’s vocal riding the instrumental. Even without the vocals, the instrumental would always elicit body movement. It was that jiggy.

Cancel culture remains a dominant problem when issues like assault come up. Lil Frosh tasted the murky water, from getting dropped from his record label, to getting remanded in a correctional center. He addressed issues like this on “Aje Pako.” Rather than own up to his mistake, he accuses some people of trying to write him off. It is not the somber track you would expect from a repentant soul. “Aje Pako,” is boastful, fun and hyper, too.

A year and two days after it was released, “Omo Ologo” made the tracklist for the EP. A bouncy and introspective take on life, party and what have you, “Omo Ologo” restates the hearsay that the chemistry between Zinoleesky and Lil Frosh might have been made in heaven. The duo understands each other and birth tracks that stand the test of time.

Marlian Record signee, Mohbad, comes through on the Baba Fryo-inspired “Denge Pose.” It runs on a minimalist instrumentation, with Zinoleesky adding some background vocals.

“Beyond Infinity” raced to a stop with “So Many Things.” It is at once chaotic, and while Lil Frosh might have purposed to show his versatility on this track, he failed to pull it off. Mohbad’s hoarse backup could have been excused, too.

After more than three years of waiting, Lil Frosh’s fans and critics finally have something substantial and definitely less controversial to attach his name to. The title might have been prophetic, but ultimately it served little purpose. Lil Frosh could have been more dynamic, worked on his lyrics and also explored more sounds, rather than sticking to Amapiano. For an artist who claimed that his artistic prowess is limitless, Beyond Infinity did not show these workings.