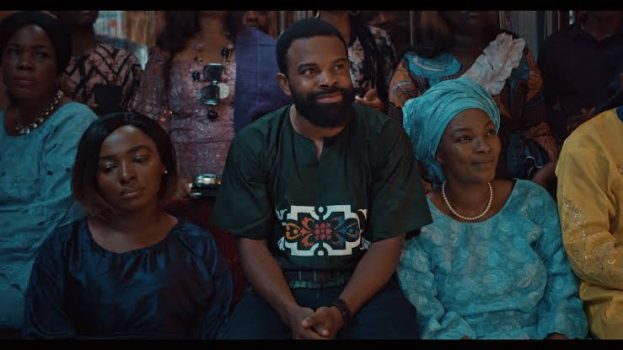 This is a film that could easily have become repetitive, going in circles as it tries to make its point. But For Maria Ebun Pataki movie doesn’t fall into that trap. Rather, it is progressive, revealing more, and somewhat raising the stakes as it goes…

For Maria Ebun Pataki, Damilola Orimogunje’s debut feature film about postpartum depression and postpartum anxiety, does not open with a woman screaming in a labour room, successfully delivering her baby, and being given said baby to hold as she smiles, excited but exhausted, at the bundle of joy that she risked her life to bring into the world. Instead, it opens with a rather melancholic sequence. A doctor delivers what doesn’t seem like good news to a worried husband. Said doctor and her colleagues are visibly exhausted after what was clearly a tasking delivery. She tells the husband that his wife bled so much on the table, and a life-changing decision was made in the operation room to save her life. When the wife finally appears onscreen, she is sobbing quietly in her hospital room. Their baby is alive and well. Yet, the mother is anything but happy.

Postpartum depression is actually very common, but there are very few films that portray it. Even in the western world, it is a rarely told story. And in a society like Nigeria’s where women are expected to have motherhood come easily to them, the concept is widely unknown. So, before anything, For Maria  Ebun Pataki movie, co-written by Orimogunje and Tunray Femi, gets automatic credit for even attempting to bring to the fore this important story. And gratefully, the film does a beautiful job. 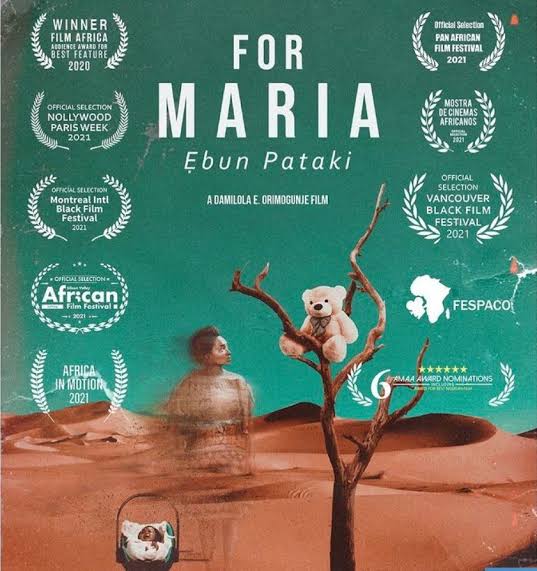 For Maria  Ebun Pataki movie follows, very closely, the post-delivery troubles of a new mother, Aderinsola “Derin” Jacobs, played splendidly by Meg Otanwa. Childbirth is generally a painful experience, but for Derin, it is particularly difficult. And it doesn’t get any easier after Baby Maria is born. Bonding with the child she birthed feels like an impossible task. Maria’s cries make Derin jump, and she can barely summon up the will to hold her child. Even though there are other mothers in the film whom one might expect to have some understanding of Derin’s plight, no one really does. Derin only gets more detached with each scene. And, through her deeply lonely journey, the film highlights how mothering can be very different for every woman, and how, even when experiences coincide, the ability to deal with them varies from woman to woman.

With Derin living through an experience that no other character seems to truly understand, it is interesting to see how the other members of the very small but effective cast are written. It would have been easy for the script to demonise the other characters. Derin’s husband, Afolabi “Fola” Jacobs (Gabriel Afolayan), could have been the impatient, absentee husband. And the screenwriters could have taken the more familiar route, at least in Nollywood, of creating a monster in Fola’s mother, Mama (Tina Mba). But For Maria  Ebun Pataki movie producer has no interest in tired tropes. A mother from a different time, socialised to consider and expect mothering to come naturally to every mother, Mama snaps at and attacks her daughter-in-law for being a “useless mother.” And when Fola jumps to his wife’s defence, Mama asks if his wife is the first to have an operation during childbirth. But it is always clear that Mama’s attitude stems from a lack of understanding as opposed to wickedness. There are several moments when Mama, impatient as she is with Derin, waits on her, including one bittersweet scene where she hugs and kisses her daughter-in-law as if she were her own daughter. And even when Mama scolds Derin, it hardly feels any more vindictive than one would expect from Derin’s own mother in a similar situation.

But the story, and how it is written, is just one half of what makes For Maria  Ebun Pataki movie successful. The other half is its strong cast, especially with Otanwa’s excellent performance. A lesser actor might have crumbled under the weight of Derin’s character. But Otanwa simply doesn’t skip a beat. She doesn’t just play Derin; she becomes Derin. There is not a moment where any doubt registers as to the genuineness of her character. The story is vivid because she makes it so.

And we can almost feel with her that loneliness and absence of mind that plagues her every moment. At the risk of seeming impressionable, I must note how taken I was with the quality of effort Otanwa put into her role. The actor has since confirmed that she gained weight to achieve a realistic postnatal body. And while it should be normal for actors to shape-shift for their jobs where necessary, credit must be given to actors who put in that extra effort in an industry where baby bumps still look like wrappers tucked beneath pregnant women’s dresses. 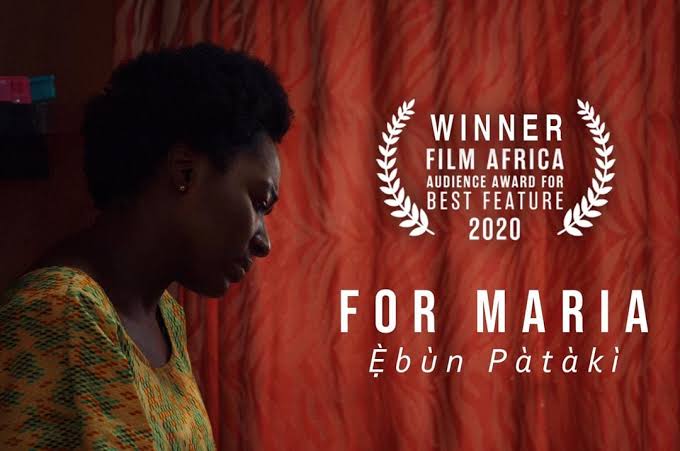 Considering how Otanwa carries her role, and with most of the film mirroring Derin’s mood, it makes sense that the camera would focus on her more than anybody else. But herein lies the drawback in the For Maria  Ebun Pataki movie’s cinematography. So much focus is on Derin that the cameras often stay trained on her so much that they forget other players, who are also on the scene, off-screen for far too long. The unintended result is that it creates distance not only between the characters, but also between the off-screen character and the viewer. As the cameras close up on one character, capturing all of their feelings in the moment, the window into that second character’s feelings is closed on us, feelings that cannot be adequately portrayed through their voice alone. In one particularly excruciating scene, Derin all but tells her husband that she does not want their child, among other similarly heart-wrenching revelations. But we have no idea how those words land on him because we do not, even once, see Fola react to them. However, in another scene where Fola finally loses his cool, the tables are turned, and the cameras focus on him, instead, blocking Derin out. It is clearly a deliberate focusing technique on the part of the filmmakers, but it ends up seeming as if the cinematographer, David Wyte, is afraid to capture multiple people in a single frame.

But there is nothing significant enough to be considered a fundamental flaw in the making of this film. This is a film that could easily have become repetitive, going in circles as it tries to make its point. But For Maria doesn’t fall into that trap. Rather, it is progressive, revealing more, and somewhat raising the stakes as it goes. For all its melancholy, even in its scores and colour palette, it still manages to hold a level of interest throughout, and if its characters are clearly exhausted, there is the likelihood that the viewer might not be.

When it comes to its abrupt and distressing end, the film feels justified. It has been building up to the moment, and there was always the impression that it was never going to give itself a soft landing. But in its rightful bid to explore the grim and uncomfortable reality of very many women, it avoids exploring options that could have been available to such women, particularly treatment options. The film puts a medical name to Derin’s state, clarifying that it is indeed a medical condition. A simple Google search will tell whoever bothers to check that postpartum depression is treatable, and counselling is one treatment option. Therapy is mentioned at least two times in the film, once to Derin and once to her husband, but it always seems to fall on deaf ears.

Granted, we live in a society where therapy is stigmatised and many do not have access to medical help, anyway. But there is no indication that the film’s couple cannot afford the therapists who are recommended to them, and we are never let in on why Derin does not so much as consider the option. Yet, the screenwriters’ choice to tread the path of doom is still very profound in that the film shows how a lack of understanding of a condition can lead to a fatal outcome that might otherwise have been preventable. And, perhaps, this is what makes For Maria Ebun Pataki movie so intense: the fact that a very common and treatable condition can wreak so much havoc when we fail to listen to or understand those affected. Maybe if Fola and his mother understood Derin’s feelings about her motherhood, things might not have gotten so bad. But again, maybe there was never really anything they could have done. Ultimately, it’s all touch-and-go.

(For Maria Ebun Pataki movie was released in cinemas in November, 2020 and on Netflix in January, 2022).