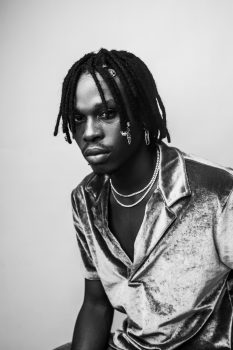 In 2018, Fireboy DML was scribbling songs and recording mid-quality versions of his songs at a friend’s home studio. Two years later, he is cementing his place as one of the new faces of an evolving music scene.

‘Jealous’ launched him into the spotlight, but it was his debut album, Laughter, Tears and Goosebumps, that left a huge impression. While it was clear that he drew inspiration from crooners like Paul I.K Dairo, Bankole Wellington and Faze, he made significant progress in trying to carve his niche.

With positive critical reception always comes the pressure to do more, but it’s rare to have artistes drop a second full-length project barely nine months after the first. By the time Apollo was released, three singles were already on heavy radio rotation.

This 17-track LP has label mate Olamide “Badoo” Adedeji calling the shots as Executive Producer. Pheelz — who collaborated extensively with Fireboy on last year’s effort — joins the team in the capacity of producer, as do Type A, IamBeatz and P-Prime. Mixing and mastering are left to the legendary TY Mix, who is joined by STG.

The album starts with ‘Champ’, where Fireboy(with the help of D Smoke) makes strong claims in the lines of “I be king, I’m the best my generation ever seen/I came, suddenly I be like NEPA bill, and ever since, I never miss”. It is not the strongest opener, but it shows intent. ‘Spell’– which dwells on infatuation — has Wande Coal making an impressive (if not memorable) contribution.

‘Eli’ is a ballad admitting to the power of a seductress. With allusions to one of the Old Testament’s infamous female villains, it would fit into a dance routine of slow waist moves amidst dim lights. The steamy ‘Tattoo’ comes next, a sultry tune which proves that Fireboy is not shy in writing about his sexual desire.

The tempo goes up a notch with ‘Favourite Song’, a tribute to 80s funk, where Fireboy reaches for Earth, Wind & Fire by way of Daft Punk. ‘New York City Girl’ chronicles a summer romance, and while it stays faithful to the album’s narrative thus far, there’s the feeling that the writing could have been more emotive. In ‘Lifestyle’ he celebrates his current high-profile status, continuing where ‘High On Life’ (off Laughter, Tears and Goosebumps) left off.

‘Airplane Mode’, a nod to mental health awareness, has Fireboy admitting to the pressure of fame and expresses the desire for solitude. ‘24’ (which begins with bagpipes) is as short as an interlude should be, but the emotion is palpable.

The line “you left my messages on read/too busy loving someone else” provides insight on what to expect with ‘Dreamer’. Fireboy DML is at his best when he is lovelorn, and there is a guitar riff for effect. In ‘Afar’, he affirms his awareness of the existence of faux friendships, and assisted by his mentor Olamide, opts to keep his distance.

‘Go Away’, rendered from the perspective of a jilted lover who is doing a horrible job at moving on, has Fireboy yelling “I don’t like this feeling”. ‘Shade’, joins a long catalogue of songs named after women, depicting the desire to share the dance floor with an eye candy, and flows with urgency.

It will be interesting to see how party-goers translate the vibes in ‘Friday Feeling’ when Nigeria’s nightclubs reopen. It fails woefully to replicate the energy in last year’s ‘Scatter’, but it’s a feel-good song nonetheless. With ‘God Only Knows’, it’s back to processing memories of lovers past. Here, Fireboy is significantly contrite, pleading for second chances. It’s the relatable tristesse that sets in after the high of the previous evening’s revelry has worn off, and you remember that you’re still reeling from the hurt occasioned by a recent breakup.

“I just want the girls to dance and whine/as we shack palm wine” illustrates what ‘Sound’ is about, with little to glean from the track other than alcohol, music and sweaty bodies. The album closes out with ‘Remember Me’ a mid-tempo tune that has Fireboy acknowledging his mortality and musing on leaving imprints on history.

Fireboy takes the safe option of sticking to the boy-meets-girl narrative, albeit in a more sombre dimension. On this record, he appears more vulnerable than the self-assured bard who, a few months earlier, crooned along the lines of “me, I fit fight for your love, but I no fit beg for your love” while asking to be treated like a “King”. Here, he is willing to share stories about how he has been left high and dry, he is not shy about his lusts, and he just wants to live.

The production on Apollo falls short, but the penmanship can hardly be faulted, and to suggest a “sophomore slump” would be reaching. This body of work is not as imposing as its predecessor, but this dreadlock-spotting, Dan Brown-reading lover boy clearly knows how to tell stories with his songs.