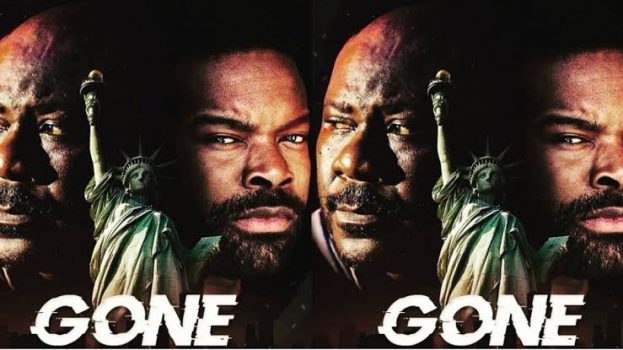 Emotion is clearly the driving force of this film — pure and genuine — held up by its narrative finesse, its well-developed and round characters…

Many Nigerians know or have heard of people who left Nigeria and disappeared. The tendency to “disappear” is one of the pitfalls of our desperation to migrate, and a part of our reality, a risk that many are willing to take. In Chineze Anyaene’s 2010 movie, “Ije: The Journey,” a woman travels to the United States of America to save her sister from becoming a prisoner in a foreign country. In “Gone,” Daniel Ademinokan explores also the trauma a family faces when their man leaves them behind in his search for greener pastures.

Produced and directed by Ademinokan from a screenplay he co-wrote with Adeniyi Adeniji and Obi Elelonye based on a story by Joy Odiete, “Gone” was made in 2018, screened at Calgary Black Film Festival in May, 2021, and released on Netflix in October 2021. It features a solid cast in Sam Dede, Stella Damasus, Gabriel Afolayan, Bimbo Ademoye, Bimbo Manuel, Gbenga Titiloye, Sophie Alakija, Emma OhMaGod, and Jumoke Aderounmu, with guest appearances from Ngozi Ezeonu, Nobert Young, Ada Ameh and Kunle Remi.

The story is simple, but also very heavy. Animashaun “Ani” (Dede), a boxer with the potential to be great, travels to New York to pursue his dreams of becoming the heavyweight champion of the world, leaving behind a pregnant wife and a 2-year-old daughter. Twenty-five years later, having lost everything, he returns home to Nigeria, hoping to get back his estranged family. But he returns to find greater loss in a wife (Damasus) who considers him dead but who never really moved on, a son (Afolayan) who is as combative as his father, and a daughter (Ademoye) who has been forced to grow up too fast. “Gone” skillfully tells the story of a family still dealing with the disappearance of a husband and father who has been gone for twenty-five years.

Exploring emotions and sympathy in a film can be very tricky. In less careful hands, it could come off as inauthentic. Poor development, inadequate characterisation and bad acting can throw a truly sombre story to the wolves. Yemi Amodu’s “Shadow Parties” is proof of this. But that is never the case with “Gone.” Emotion is clearly the driving force of this film — pure and genuine — held up by its narrative finesse, its well-developed and round characters, and the splendid acting. From the get-go, there is a cloud hovering over the characters, a weight they carry around even in their daily life. As the film drags on in the beginning, we are slowly let in on their present, their backstory begging to be told. And when the backstory gets told, we are fully involved, deeply moved, understanding and sympathetic towards every one of them. To top it all off, there is a well-curated and immersive soundtrack to constantly emphasise the emotions. 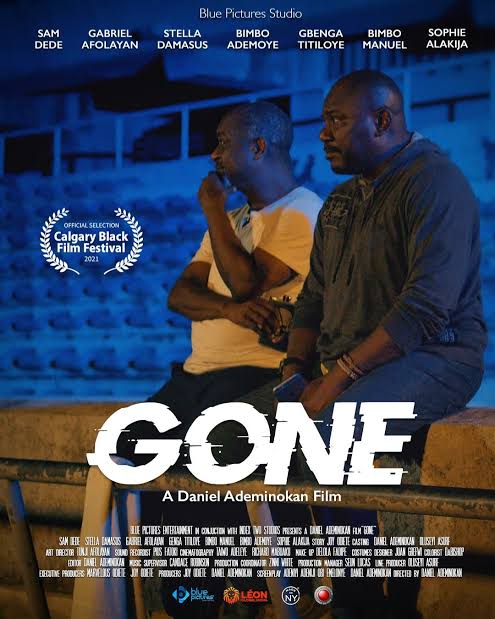 Both the casting and the acting are perfect. In addition to the fact that there’s an obvious genetic semblance across Ani’s family, the film blesses us with a combination of some of our most adept veterans and a good helping of our most talented new-generation actors. In playing Ani, Dede carries his character’s emotions like a weight on his shoulders. He is a defeated but resolved man fighting for a second chance. Damasus herself has a reputation for the emotional role she played as a widow in the 2005 film “The Widow.” She is flawless playing Ani’s wife, Ngozi, a woman who is angry, in pain and even broken but who has had to be strong for far too long to just crumble. Afolayan has as much potential as the character he plays, Ani’s son, Ayochukwu. It is interesting how he embodies his role, employing initial gragra as a tool to portray a young man who hides his feelings of inadequacy under false appearances. His acting makes Ayochukwu’s sudden transformation believable, because he makes it obvious that the new, changed Ayochukwu was in there all along.

“Gone” finally gives us the non-comic role we have always wanted to see Ademoye play. Her range is undeniable in the way she plays Anuchukwu, Ani’s daughter, effortlessly moving from the calm and reliable daughter and sister to the extremely angry and damaged daughter and sister suddenly willing to scatter things owing to her pent-up trauma. If you ever wondered, now you know for a fact that she is brilliant and grossly underutilised by Nollywood filmmakers. As a matter of honourable mention, Manuel excels, as usual, as a father-figure, and Emma OhMaGod is the kind of comedian we like to see in a film like this, with his quality acting and effortless comedy.

The film deserves additional praise for the beautiful cinematography. We are presented with cinematographers who are worth their salt when it comes to capturing beautiful sceneries, but are, at the same time, uninterested in excessiveness. Although the film is partly set in New York, it is really just the opening and closing scenes that are set in that city. The few flashbacks about Ani’s time there are only flashes and could have been shot anywhere. But those opening and closing scenes are well captured; and so are the scenes set in Lagos, whether in Festac or at the stadium. The only cinematographic fault is the inability to flawlessly capture slaps, blows and punches, a big deal only because the film is built around boxing, fighting and a lot of anger. This flaw is compounded by the soundman’s microphone which is occasionally too sharp, and the editor’s transitions to flashback which could have been smoother.

Credit is also given for the use of language, the creativity in using multi-ethnic names, Ayochukwu’s decent Igbo (for a non-Igbo actor), Ani’s lack of a false accent, the natural and relatable dialogue, and the occasional humour that is never jarring or unexpected.
The film does come to an underwhelming conclusion, a frustrating fairy-tale ending to a film that deserves better. Even the mid-credits scene used to justify the disappointing end leaves a sore taste about the film’s ultimate choices. But it does not quite sully the overall quality. Perhaps, the defining statement is Ayochukwu’s cocky comment in a scene where Ani dares him to a fight, “Baba, I no dey do promo. I dey show myself.” That is exactly what “Gone” does: it shows itself.

Sometimes, a Nollywood movie comes that leaves you deeply affected. With its excellent cast, proper directing and the depth with which it captures emotions, “Gone” does just that. Even though it gets in its own way in the end, it is, without a doubt, a splendid film.