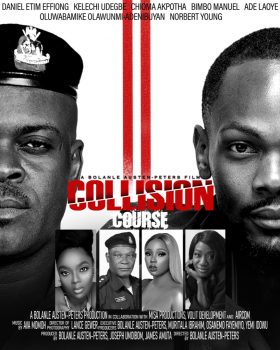 “Collision Course” Review: Bolanle Austen-Peters Makes a Social Commentary on Police Brutality. But to What End?

With Collision Course, Austen-Peters allowed something very similar to the very distasteful way violence was handled in Man of God, her last film to hit Netflix before this one: implicitly justifying abusive behaviour and tirelessly preaching while at it. The intentions are confusing…

In October 2020, while the world was in the turmoil caused by the COVID-19 pandemic, young Nigerians took to the streets to protest police brutality. The EndSARS protests — a movement to force the ban of the Special Anti-Robbery Squad, a police unit with a reputation for illegal methods and extrajudicial killings — took the country by storm, made international headlines, and culminated in an even more terrifying show of brutality from law enforcement and armed forces. It was one of the heaviest and most sensational moments in recent Nigerian history. During the protests, while some police officers harassed protesters, there was a lot of talk about the economic condition of law enforcement officers. Some protesters carried placards that declared that the fight against police brutality was also a fight for the police. In fact, one of the demands the protesters served on the Presidency was for the improved welfare of the police. And it is against its backdrop that theatre magnate and Nollywood producer/director, Bolanle Austen-Peters (The Bling Lagosians, Man of God), along with screenwriter James Amuta, set Collision Course, a drama in which the fates of a young man and a policeman collide.

Daniel Etim-Effiong plays Mide, the musician son of a wealthy father (Bimbo Manuel) whose decision to abandon his UK law degree puts him at odds with said father. Unable and unwilling to depend on his father’s money, and with a pregnant fiancée (Bamike “Bam-Bam” Olawunmi-Adenibuyan) and a nonmainstream taste in music, Mide has to struggle to find a paying audience. On the other hand, Kelechi Udegbe stars as Magnus, a conscientious, low-level policeman working to level up so that he can provide for his wife (Chioma Chukwuka Akpotha) who is threatening to leave him with their children. His attempts to get transferred to a more lucrative unit called TARZ (the film’s version of SARS) prove futile, despite sponsoring those efforts with his child’s school fees. At the peak of their frustrations, Mide finds himself at Magnus’ checkpoint on a Friday night, the former pointing a gun at the latter in the most heated moments of a demand for a bribe.

The quality of the tension between them is intensified by Mide’s history with the police. In the film’s opening sequence, Mide is abducted by a group of TARZ officers who murder another abductee in Mide’s presence for not having money to give them, and force Mide to transfer the money in his account to them at gunpoint. In the weeks that follow, Mide is plagued by nightmares and an uneasiness that lead his fiancée — who knows nothing about the incident with TARZ — to worry that she might be forcing their planned wedding on him. He becomes particularly apprehensive of the police, simultaneously afraid of them and confrontational towards them. His reaction to Magnus’ demand for money pushes the officer to a wall that he has actively been avoiding, and having just received devastating news from his wife, Magnus snaps. The encounter results in a forced police brutality debate where both sides reach an understanding that is unfortunately not enough to prevent the impending disaster.

With a story like this, it would seem pretty obvious what the goal is. But it turns out that it’s not. At least, not in the way one would expect. It presents itself as a balanced portrayal of both sides of the police brutality debate, but it feels too much like the film is picking a side. Its show of support for victims appears pretentious, particularly because of how it consistently defends the police. There’s no doubt that the system is rigged, but the film relies too heavily on the “few bad eggs” argument and readily avoids placing any responsibility on the police force.

Peppered across the film are defences and excuses on behalf of the police. A radio report tones down how pervasive the problem is by claiming that “The special unit established to combat armed robbery has been hijacked by some rogue elements contrary to the laudable objectives for which it was set up.” Then, just before Mide’s encounter with Magnus, as he approaches the checkpoint, Mide voices out his discomfort with the police, but his friend (Ade Laoye) quickly jumps to their defence. “It’s a Friday night,” she explains. “They’re expecting that people that are coming back from the club will drop something for the boys… It’s not like they get paid a decent minimum wage. You make more from one gig than many of these guys make in a whole year. Some of them even suffer PTSD and need counselling.” To really drive the “it’s the system’s fault” message home, the screenplay puts Magnus, its one good police officer, in a spot so rough that the “If you can’t beat them, join them” choice becomes almost-justified. And in one particularly eyebrow-raising example, some young men abducted by TARZ officials deny being internet fraudsters, even under torture. There’s nothing to indicate that they’re guilty of the accusations, and with the way the police unit is portrayed in the film, it seems more likely that the men are not. They could have easily been credited as torture victims or something along that line, but, instead, they’re labelled “Yahoo Boys.” The devil is in the details, and, in this film, the details reveal a desperate need to appeal to all parties, with special effort reserved for the police who would likely be more difficult to please with a subject matter such as this — and also, perhaps, the censors board. 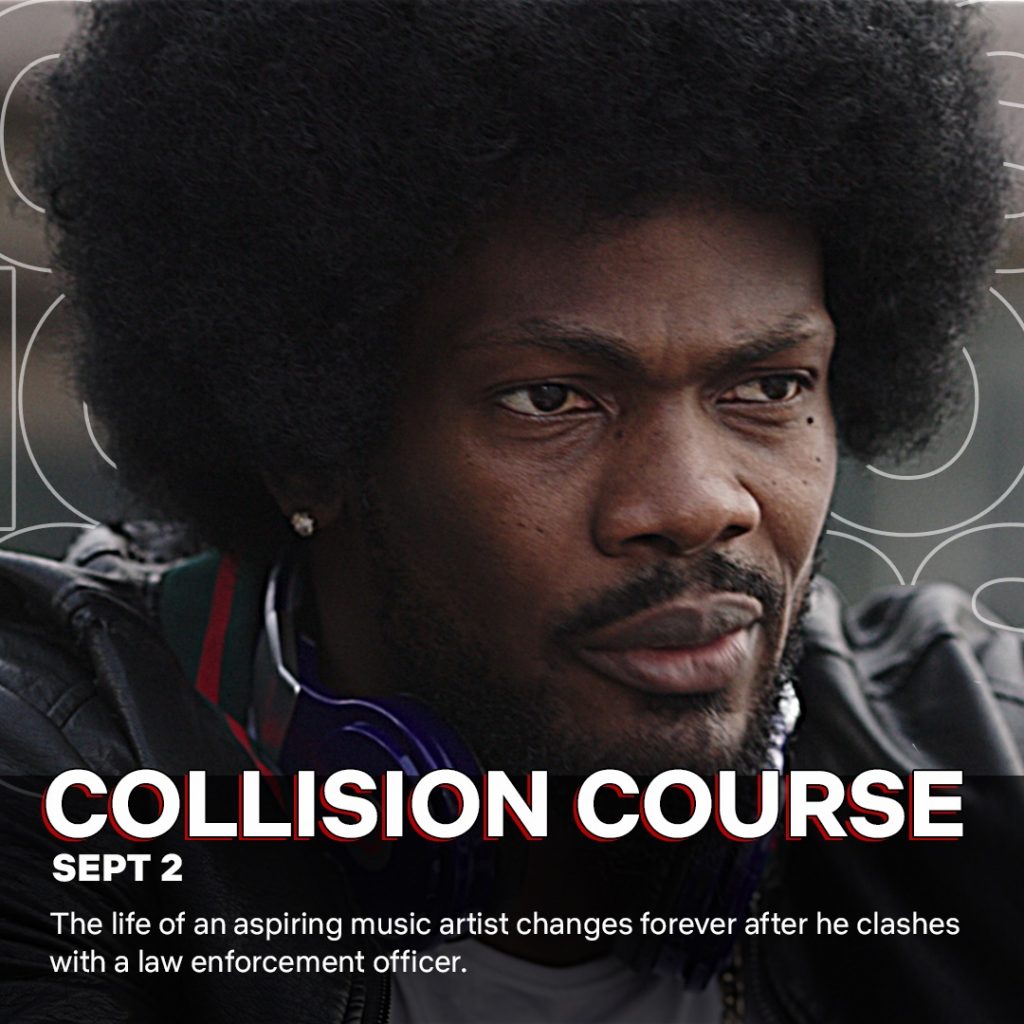 To an extent, the approach worked. Collision Course did have a good run at the awards and on the festival circuit. It beat thousands of films to be selected as the closing film for the Africa International Film Festival (AFRIFF) in 2021 and earned four nominations at the 2021 AMAAs, including the AMAA – National Film and Video Censors Board (NFVCB) Award for Best Nigerian Film. While it didn’t win the NFVCB Award, Amuta went home with the AMAA for Best Screenplay. The film also won the award for Best Movie West Africa at the Africa Magic Viewers Choice Awards (AMVCA) 2022. Of course, Collision Course will stir up some conversation around police brutality. But I doubt it’ll be the kind of conversation the filmmakers hoped for. Perhaps, some people will find the film to be enlightening. Yet, I expect that the film will cause some controversy. I imagine that many who have experienced police brutality will feel betrayed.

Just before the credits roll, there’s a clip of fundamental moments in the EndSARS protests accompanied by a chant of the names of real-life victims of police brutality in Nigeria all of whom are referred to as heroes. On black, the words appear; “In honour of the unsung heroes who stand for justice, liberty and human rights.” The film has been positioned as an effort to honour the memory and the sacrifice of the victims of police brutality, as well as explore our collective victimhood at the hands of the system. But it ends up feeling like police propaganda. It’s amazing how the film shows how rotten its target police unit is with every other officer but manages to use one man to absolve the entire police force. With Collision Course, Austen-Peters allows something very similar to the very distasteful way violence was handled in Man of God, her last film to hit Netflix before this one: implicitly justifying abusive behaviour and tirelessly preaching while at it. The intentions are confusing. If it were direct and unapologetic about its police sympathy, it would be respectable for being daring, regardless of how its messaging would be perceived. But claiming to be a movie in honour of the victims while being much more sympathetic towards their oppressors is just insincere and passes an unclear message. 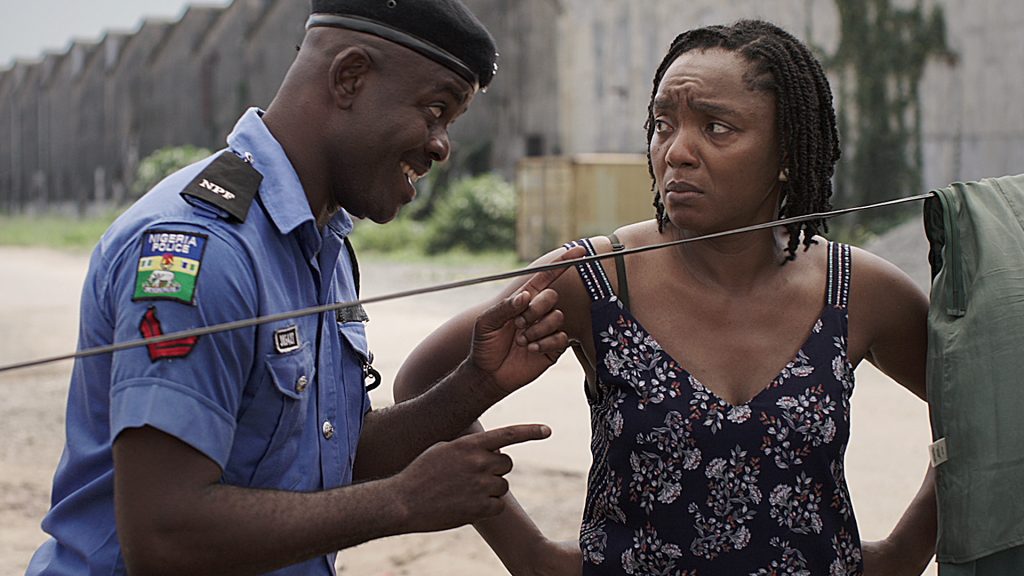 As moving as Collision Course can be, it only gets emotional because of the performances of its stellar cast who put in brilliant shifts from start to finish, especially Udegbe, Olawunmi-Adenibuyan and Etim-Effiong, in that order. The score doesn’t do much to further the emotional weight that the scenes carry. The cinematography doesn’t tower so much above the expected so as to be as impressive as its AMVCA nomination would suggest. Other than the splendid acting, the story is what gives this film its remarkableness. However, with a screenplay that wants to make some profound statement but is either unsure of what it wants to say or is just too afraid to say it, Collision Course doesn’t quite hit the mark.

(Collision Course was initially released in 2021 and is now streaming on Netflix here).

Vivian Nneka Nwajiaku, a film critic, writer and lawyer, writes from Lagos. Connect with her on Twitter @Nneka_Viv and Instagram @­­_vivian.nneka.