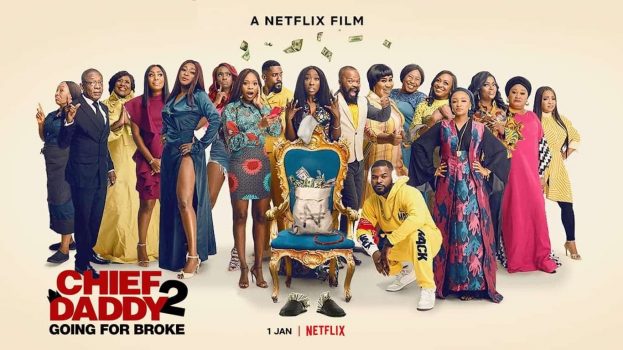 When a film critic or even the average filmgoer complains about the poor quality of Nollywood films, the ready response is that Nigerian filmmakers do not have access to the resources required for the quality of films being demanded. There is truth to this argument. A low-budget film may excel in its story, but it will likely fall below standard in other filmmaking elements. Yet, there remains the fact that the problem is beyond the scarcity of deep pockets. And the Chief Daddy sequel, a Netflix film, proves this.

The first part premiered in cinemas in December 2018, helmed by Ebonylife, written by Bode Asiyanbi, and directed by Niyi Akinmolayan. Three years after, Netflix has partnered with EbonyLife to release Chief Daddy 2: Going for Broke on the streaming platform.

The original movie followed the internecine battle within the Beecroft family, as wife, mistresses and children set out to jointly plan a funeral for their benefactor, Chief Daddy, as a condition for their inheritance. After pulling off the ceremony, albeit with several hics, it turned out that Chief Daddy’s properties were tied up in the Beecroft family business, and said business had an IPO under way, preventing them from accessing the money.

Chief Daddy 2 picks up where the first left off. The IPO is near. The new majority shareholder is Laila (Sadau), Chief Daddy’s daughter from yet another extramarital affair. Embittered by her father’s absence from her life, Laila, for some reason, decides to punish the Beecroft family, including the other children who suffered the same absence, by standing between them and the inheritance.

The movie opens with cut-and-join scenes from the original film as a brief reminder of the events that led to the sequel, as if unsure of the first movie’s memorability, before immediately delving into what is presented as the central conflict.

Surrounded by the rest of the family, Laila stands at the head of a table and recites her manifesto. It sounds like a personal vendetta against them. She will not honour Chief Daddy’s will. His heirs will take whatever she gives them, she says, and even thank her for it. Expectedly, they decide to fight her. This is the first real scene of the movie, and it promises a dramatic battle for the family’s inheritance. If Chief Daddy 2 delivered on this promise, it would have been the one good thing about the movie. But it fails to deliver on anything at all.

The sequel boasts of a cast that is more star-studded than that of its predecessor. But this time, the star-studded cast is undeniably in the wrong movie. Here, talents are put to no use, with most of the characters heavily underwritten or underdeveloped. And, like many star-studded Nollywood films, this one prioritises glamour and appearance over content.

It doesn’t have much of a central plot or any content of true value, neither does it have a structure that it develops around. It is simply all over the place, heavily repetitive and severely lacking in coherence. Instead of exploring the conflict that was positioned as the movie’s driving force, the filmmakers chose to take viewers on a world tour that nobody asked for, forum shopping for nonexistent content.

First, a chyron on the screen informs us that we are in Lagos where the few events that matter take place. Shortly after, another chyron takes us to London to fuel a stretched-out but on-the-surface subplot about Dammy (Gavor) and Adaora’s (Naya) relationship that could have easily been fueled in Lagos. And finally, we relocate to Dubai where we spend a large chunk of the movie literally achieving nothing.

But, for some unclear reason, the movie doesn’t ever let us forget which country we are in at any time, with chyrons popping up every now and then as forceful reminders. We get the picture: the movie is set partly in London, partly in Dubai, and partly in Lagos. Understood. Can we move on now?

But, at least, the chyrons serve some purpose. Half of the characters serve none. Some characters disappear from the screen for most of the movie as if they only showed up to mark their attendance. Some show up from time to time and obsess over the inheritance but never get involved. Some appear to be involved, but they are really chasing some other subplot — whether it’s fame and publicity, or an undeserving love interest, or a music career that barely deserves to take off.

A few characters have undergone some sort of personality change in the very short time between the first movie and the sequel, the most shocking being Ireti (Balogun) who has radically changed from the nice, peace-seeking woman, to the evil, gossip-spreading family member. And others have no business being onscreen, especially Omar (Broda Shaggi).

It’s difficult to understand why on earth Omar was not written out of the screenplay from the start and what inspired Akinmolayan to let Omar’s scenes make the final cut. It’s not that Shaggi is a terrible actor — he was literally typecast. But his character and every scene that has him in it are just as unnecessary as this sequel. And the help he ultimately renders to Famzy (Falz) would not be needed if the screenplay did not rely on the “Nigerian scammer” trope.

Let’s not even get started on the stereotypes Chief Daddy 2 needlessly peddles. Since the first movie, it has always been clear that Tinu (Akindele-Bello) and Teni (Henshaw) have a real friendship beyond just being sisters. In fact, they are the only two women who happen to be friends in the movie. Why does the sequel choose to pit them against each other over a man? And it doesn’t help that said man seems to have been created solely for the purpose of putting a wedge between the sisters while the men in Chief Daddy’s family get along without having to compete even for the throne. What is the point, really?

It’s not that the movie doesn’t work at all as a movie, or, at least, a comedy. There are a few decent laughs in the first half, at least, before you become too exhausted to manage a chuckle. Falz is, surprisingly, a breath of fresh air in the bad chaos that is this sequel. And even he gets tiring, with his false British accent shtick that is better in this sequel than in the original and is, at least, not annoying like his role in movies such as Quam’s Money and Merry Men. But mostly, Chief Daddy 2 is an unapologetically pointless movie that does not so much as attempt to justify its absurdities.

This is a movie that is never sure of where it is going or where it is coming from. It lacks direction and has no form of creativity. The script is just too messy.

Too many scenes are too cringeworthy. And while it is becoming cliché to say that a movie feels like a string of skits, Chief Daddy 2 fits too much into that box, especially with the choice of transition used throughout the movie. It actually runs like too many short clips put on a string to last for nearly two hours. It isn’t even much of a string, really. It is basically a disjointed chain with no flow to hold the pieces together.

As fast-paced as it is, it still doesn’t come to an end fast enough. At one point, where most of the members of the family are again gathered around a table, hurling words at each other, Nike Williams (Bello) declares, “I really want to know where you guys are going with this!” As a viewer, too, I wasn’t so much interested in any point the movie might ultimately be aiming to make. I just wanted to quit.

But as a critic, I needed to see where it was all going. The movie could have explored Laila’s feelings towards her father and his family. It could have explored the feelings of the children he hid away from the world until his death. But it handles its only worthy conflict in the most abysmal way, and it ends up going nowhere.

An ensemble cast, luxurious locations, all that glamour, and the more than decent cinematography cannot save this mistake of a movie. Chief Daddy 2 is not just an unnecessary sequel; it is disappointing, embarrassing and heartbreaking. It is a wonder how all those talented people, actors and filmmakers alike, could let this happen. I cussed a little too much while watching the movie. And I cannot imagine that anybody would truly enjoy the bad mess that it is.