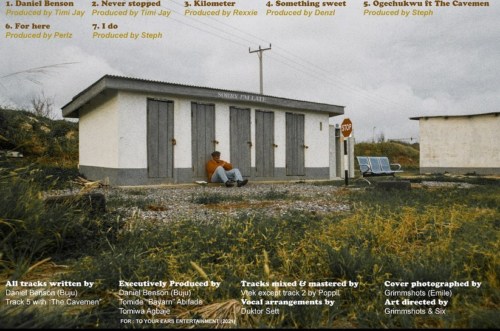 While juggling the terrains of mellowed Afro-fusion, Buju creates a soulful bowl of optimistic and easy-going groove that serves as a recipe for his sustained evolution…

If you have ever visited the ancient city of Abeokuta, you just might have encountered the artistic wonder called Aso Oke, which translates to “Cloth From The Hinterland.” The artistry birthing this globally acclaimed apparel is a slow-burning, masterful tapestry that infuses local cotton with breathtaking native weaving patterns that dates back centuries. And while soaking up the just-released debut sound piece from fast-rising Afro-fusion singer, Daniel Benson, professionally known as Buju, one gets the exact same feel.

“E wo mi Daniel Benson (Look here, I am Daniel Benson)/ Ti ba ko orin, e ma jo bi Michael Jackson (If I sing to you, you will dance like Michael Jackson)/ And the boy is not joking. You know my melody is on fire, and I don’t tire,” the high-pitched vocals spin the 7-track Extended Playlist (EP) dubbed, “Sorry I’m Late” into a heart-pumping start with the eponymous song, “Daniel Benson.” The record begins the conversations that this EP embodies – a series of self-affirming monologues; and while Buju champions a narrative of his sonic rarity and brilliance, it’s not really a discussion he is opening up for debate.

From “Daniel Benson” to the second track, “Never Stopped,” down to the closing track, “I Do,” the entire album brews as an unapologetic statement and not an actual apology; flushing with the well-winnowed gems of Buju’s silky vocalisation, feel-good lyricism, and emotive melodies. “Sorry I’m Late” is Buju restarting a party that started to become a bit dull right in the peak of the celebration. The now independent singer rebounds from the experiences of stepping into the limelight, back in 2019, then blurring from the mainstream consciousness in 2020, after a now-moribund record deal with Burna Boy’s Spaceship Records, with an arsenal of chart-topping music that immensely sound-tracked the growth of Afrobeats this year.

“Been a long time coming, but we here finally.” “Daniel Benson” continues to give the entire EP its direction, reminiscing upon Buju’s iconic entry into Nigeria’s music circle. Buju’s race to the limelight was one fraught with several stressful experiences, from strolling through the streets of Lagos as an unfulfilled university student, to being sacked from his undergraduate internship, because he would skip work and go to the New Afrika Shrine, the ‘Presidential Villa’ of Afrobeat, to smoke weed and write music, to growing up with a painful memory of losing his mother to cancer at a tender age. With a heaven-bent affection for his craft, the singer channeled all the skepticism, bootlegging his career with a renewed enthusiasm, which shows in how he remodelled the name of his Jamaican musical idol, Buju Banton, to reflect his own narrative with a witty acronym: “Beauty Underneath Just Understood.”

“Vibes e dey body/ e no dey finish.” The Cavemen.-assisted record, “Ogechukwu” powers the climax of the EP, with the soul-stirring mid-tempo Highlife groove. “I featured only the Cavemen on this EP, because I feel like people are not going to expect this kind of sound. When we recorded it, I just liked it, and I knew I wanted to show that I could do it,” Buju commented during the listening party for the EP, in Lagos. Many may wonder why Buju features only the fraternal duo on this album despite having made chart-topping collaborations with a lot of heavyweights, such as Ladipoe (‘Feeling’), Savage (‘Confident’), Wizkid (‘Mood’), among others, this year alone.

It is very tempting to consider “Sorry I’m Late” as a weaker Buju project, when we compare his earlier pop-heavy releases, but the EP ripples with the same confidence that laces its lyricism, showcasing the singer in a more mellowed alto that reveals the beauty of his musical evolution. With the song, “Kilometre” (which shares titles with another recent Burna Boy record), Buju reminds listeners of his fan-favourite pop-heavy styles, while going ahead to weave other slow-burning soulful melodies with the other tracks, ultimately birthing a beautiful art piece just like the Aso Oke. It is not Buju’s best work, but with every new song, the singer keeps raising his own bar. However, it is his most emotive and poetic, so far.

While the Akwa-Ibom indigene continues to rise to the spotlight, looking back in retrospect from his childhood days as a P-square and Olu Maintain wannabe, to becoming a Burna Boy and J Hus stan, it is evident that the singer who describes himself as “a mix of Burna Boy and Frank Ocean” has had quite indeed a fortunate run, so far, which concretises the gratitude and self-affirmation that lace the record like colourful thread. As Buju gives himself his roses, the melodies provide a titanium vase that shields it from the damage of skepticism that wage war against it.

“Sorry I’m Late” is an avant-garde debut from the Gbagada-bred singer which flushes with a stellar songwriting that attempts to overshadow his acclaimed flawless flows. It isan Odunsi-esque production that is beautifully abstract and seemingly undercooked to boost its flavour. While its track listing appears to be a bottom-heavy arrangement which softens the momentum at the top, the project ultimately shines for its complex simplicity. It is a vivaciously vibrant foundation for Buju’s discography, projecting the singer as one of the most brilliant voices out of Nigeria. Buju is unable to stay far away from your ears.

Chinonso Ihekire is a freelance music and culture journalist based in Lagos, Nigeria. His critiques and writings have appeared in pan-African publications such as The Guardian, Wakonte, and More Branches. He enjoys exploring and documenting Africa’s thriving contemporary art evolution, especially in Music, Film and Lifestyle.