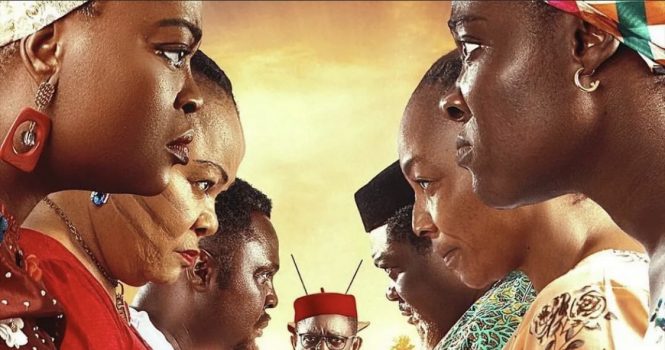 With its hilarious dialogue, over-the-top events, and the appropriately melodramatic acting, it’s amazing how Battle on Buka Street manages to squeeze in so many valuable stories and as many cute moments without feeling forced…

The first thing you see in Battle on Buka Street is food. In this movie, food is a tool for both discord and unity. It’s also a part of identity. The food metaphors — although there are not many of those — start early, too. Even merely seeing food being cooked, eaten, or talked about is already a win.

That central role of food, the film’s comedic elements, its cast of veterans and newly-famous faces, and its home video-type histrionics are likely enough to put audiences in a chokehold. But Battle on Buka Street goes further. Directed by Funke Akindele and Tobi Makinde (both of whom co-directed the 2020 box-office hit, Omo Ghetto: The Saga), the film has credible characters with believable motivations, passes important messages, and tells several good stories, even if too many.

Battle on Buka Street opens with a voiceover that introduces viewers into the world of the film, starting with Buka Street, a food market in Otanwa Community where food vendors and their not-so-loyal customers converge in multiple bukas. Buka Street is where one half of the film’s warring quartet work and thrive.

Akindele, the actor-director who played a double lead role as twin sisters in Omo Ghetto, stars yet again in a leading role as Yejide, the owner of the most popular amala joint on Buka Street. Sola Sobowale is cast as Asake, Yejide’s battle-ready mother and the second wife of Maduka (Nkem Owoh).

Unknown to them, a war is coming. But ahead of that war, Yejide’s narration takes us back to the distant past, to a time when she was still in her mother’s womb. In that past, the rivalry between Yejide’s mother (played in her younger years by Bimbo Ademoye) and her senior wife is clear. They’re both pregnant at the same time and constantly competing for ownership of their husband, even in the maternity ward. When their daughters are born, the rivalry is passed on to them. The girls come of age in that unhealthy environment, so that by the time one of them finds a husband, the other rushes into marriage and they end up wedding on the same day.

Respite only comes when one of them leaves town with her young family. But it doesn’t last long enough. Yejide brings us back into the present day, where she is a successful “mama put” in the same Otanwa Community. On one busy day in her shop, she sees a bus drop off some people.  As the bus drives off, she stares her worst nightmare in the face. Her half-sister, Awele (Mercy Johnson in all her Asaba Nollywood glory), is back to Otanwa Community. And she’s taken the shop opposite Yejide’s.

(Read also: Adebayo Tijani’s Ijakumo: The Born Again Stripper Is Only Half as Good as It Promised to Be)

Yejide guides us through all that history, with a narrative style that places her in the realm of a commentator at a boxing match. Akindele doesn’t have the smoothest voice. Even the film acknowledges that, making sure to throw in a joke about Yejide’s voice before the credits roll.

If it were a commercial, maybe auditory pleasantness would matter so much. But as the intro of a film, I can’t recall a funnier voiceover than what Akindele delivers here, especially with the truly amusing occurrences onscreen that it accompanies. By the time the considerably excessive expository voiceover ends, we’ve been fully situated in the world of Buka Street. When all the noise and drama come, we’re prepared for them.

And oh, they come! The theatrics in Battle on Buka Street are exactly what you’d expect, and then some. The return of Awele triggers more unhealthy competition, with Yejide setting actions in motion most of the time, and Awele playing catchup. Yejide’s mother cooks the stew that makes Yejide’s amala the most sought-after, so Awele wants her ailing mother, Ezinne (a controlled Tina Mba), to cook her unrivalled ofe akwu.

Yejide’s son, Ademide (Moshood Fattah), is sent off to America, so Awele chooses Canada for her daughter, Ifunanya (Uche Obunse). Like their mothers before them, Yejide and Awele rope their own daughters into the war. Then, the pranks follow, from rats under tables to cockroaches in food. Until the pranks become too expensive. Properties get destroyed and innocent people’s lives get caught in the crossfires, resulting in a well-choreographed physical fight and a destructive spiritual battle.

As the title implies, the battle that forms the main plot remains front and centre of Battle on Buka Street for its entire running time. But it is how that main plot is balanced against its substories that really makes the film a solid one. In this film, there is an excellent plot twist about the japa syndrome. There is an interesting commentary on the failed criminal justice system. There’s a subplot that sees young adults break generational curses and walk out on toxic work conditions.

There’s a story about a woman leaving an abusive husband. There’s another story about the trials of single motherhood. There’s even something about educated women accepting polygamy. All these stories tie in neatly with the familial rivalry at the centre, providing emotional beats where needed and grounding the film more firmly in a relatable reality.

Yet, it doesn’t fall victim to the usual stereotypes in the process. For all its focus on ethnicity — Ezinne is Igbo while Asake is Yoruba — the conflict never turns inter-ethnic. And of all the recent big Nollywood projects about polygamy, I doubt that there’s any that has handled the subject with less judgment than Battle on Buka Street. Maduka is always presented as a fair, polygamous man with no favourites. And even though the first wife, Ezinne, and her daughter, Awele, often express sentiments of being unfairly treated, polygamy is never approached with preachiness.

Battle on Buka Street runs for two hours and twenty minutes, during which there is no dull moment. But did we need to watch it for that long? With too much already happening in the film, there are several scenes and a few subplots that feel redundant. For instance, what did we need the entire subplot around Ademide’s police case for?

It can’t be to establish a friendship between him and Ifunanya, because they’d already solidified that friendship over a wrap of suya. It also can’t be to enlighten us on the criminal justice system because the entire story of Yejide’s husband, Lashile (Femi Jacobs), already did that. At the end, Ademide’s police case added nothing to the film but extra time.

And even with all that time, Battle on Buka Street still seems to skip scenes, leaving gaps that ought to be filled by the screenplay, and not merely left to imagination. Awele’s characterisation suffers the impact of these gaps the most. One minute, she’s actively pushing away the neighbour (Sani Danja) who is interested in her; the next minute she’s very cozy with him. We’re expected to accept the sudden change in her relationship with him, and to pacify us, the writers throw in a single line of explanatory dialogue that doesn’t undo the jarring effect.

Then, in the final act, when Awele goes through her character arc, the film doesn’t show it to us. One minute, she’s being adamant about revenge, the next she’s walking a different path. This time, it doesn’t bother with the expository dialogue. Perhaps, like us, the writers were getting tired, too.

Still, there’s enough characterisation in the film to be convinced of the choices of all its characters, even if only just. And if you’re not convinced, the film makes it clear that you don’t need to be. Despite its many important stories, this is not a film that takes itself too seriously. It’s majorly just a fun ride.

I enjoyed this film a little too much, and I laughed so hard, I almost choked on my drink. And with its hilarious dialogue, over-the-top events, and appropriately melodramatic acting, it’s amazing how Battle on Buka Street manages to squeeze in so many valuable stories and as many cute moments without feeling forced.

So much money was spent in 2022 advertising Nollywood to global audiences while simultaneously trying to prove that Nollywood is home. We started 2022 with Netflix’s favourite polygamous family in the terrible Chief Daddy 2 (in which Akindele also starred). But to my mind, there hasn’t been a better proof that Nollywood is home than this December theatrical release.

Whether in the home video feel of Battle on Buka Street, even with its top-notch production, or in just how many different aspects of culture that it showcases — from food to traditions such as marriage ceremony, the celebration of a newborn, and a mourning culture. Yet again, Akindele and Makinde have made a commercial film that tells a familiar story in an interesting and funny manner without sacrificing substance on the altar of comedy. And again, they did it in a cinematic language we understand. Who told Nollywood folks that it’s not possible?

(Battle on Buka Street is showing in cinemas.)

Vivian Nneka Nwajiaku, a film critic, writer and lawyer, writes from Lagos. Connect with her on Twitter @Nneka_Viv and Instagram @­_vivian.nneka.