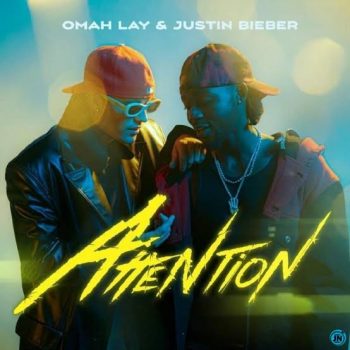 Perhaps, to further expand his fan base, promote his sound, and explore the international market, Lay swings over the fences this time, by teaming up with global music icon, Justin Bieber, for this utterly special afro-pop fusion titled “Attention.”

2020’s break out star, Omah Lay watched keenly as the world reeled from the dastardly effect of the COVID-19 pandemic. In that time, he busied himself working on his album dubbed Get Layd which would later become the country’s principal consolation in the dark and perilous months of social distancing and quarantine. The Port Harcourt-born artiste seemingly emerged out of nowhere and redirected the course of Afrobeats with his catchy, mid-tempo, melodious sound, instantaneously winning the hearts of many with his smash-hit, “Bad Influence.”

Perhaps, to further expand his fan base, promote his sound, and explore the international market, Lay swings over the fences this time, by teaming up with global music icon, Justin Bieber, for this utterly special afro-pop fusion titled “Attention.”

The track was released under label imprint KeyQaad, the video was directed by world-renowned video director, Colin Tilley, and produced by Clark Jackson known professionally as Constellation Jones.

Collaborations between two artistes with very different cultural backgrounds, orientation and ideology for the sole purpose of making great music is always a welcome development. Bieber, as well as a host of other foreign artistes who have expressed their admiration for the African sound and also declared interest in working with afrobeats singers, only recently featured on a remixed version of Wizkid’s 2021 monster-hit “Essence.”  This particular collaboration, however, has taken many by surprise, and many more have received it with mixed reactions, questioning whether or not it’s a step in the right direction for the “Lo Lo” crooner, as they feel he should be concentrating more on trying to solidify his position in Nigeria and Africa rather than trying to gain international prominence too soon.

Creativity is the weapon of this Gen Z group of artistes, and they are very adept at it. Omah Lay who falls well within that age profile is among a few currently in pole position leading the Afrobeats chase, along with some of his peers in the industry.

Director Colin Tilley is a Renaissance Man of some sort when it comes to music videos, and all aspects pertaining the visual representation of any artiste involved. He is the creative force behind some of Justin Bieber’s amazing music videos including “Ghost,” “Peaches,” to mention a few. This must have informed Omah Lay’s decision to obtain Tilley’s creative expertise for this particular project. The video director opted for a high school camping trip themed-style where a group of young adults gathered round a camp fire, giving the scenery an atmosphere of a fun vacation. Multi-coloured LED lights were used a lot in a scene by the gaffer to illuminate the set, and photosensitive viewers should take caution because this video could be potentially harmful.

Tilley delivered some thrilling shots in this video as was expected of him, depicting scenes of Omah Lay trailing a girl he’s interested in. She leads him down to a room where she is later seen performing privately for him. Tilley also captured some scenes of Justin Bieber getting cozy with his love interest, and they’re seen sharing a warm embrace in each other’s arms. There were also some long-shots taken of both Lay and Bieber standing under a tree as they performed the song together.

Lighting setup for filming “night” scenes can often be a daunting task, to successfully retain and capture that natural atmospheric ambience of the night, without making it look like a bunch of lights were thrown all over the place. This is where the gaffers earn their money, and the use of tungsten lightbulbs is where all the magic happens. Tungsten bulbs are ideal for shooting videos as it brightens the set, making it seem like natural sunlight was used to shoot. It’s usually a better alternative to the LED lights used on sets, as, compared to the LED lights, tungsten bulbs do not generate heat. Few cinematographers are adept at lighting a film set, and this why professional gaffers are hired. The director or cinematographer in charge of the shoot communicates their vision to the gaffer about the theme of the video and how the lighting should appear in the picture/film, and then the gaffer suggests ways which all of it can be achieved.

One major challenge to take into consideration when shooting “night” scenes like the one in “Attention” is picture and video clarity. There’s the tendency to take multiple shots until the cinematographer eventually settles for the sharpest and cleanest shots. This can sometimes be frustrating. Occupational hazard is also another thing to consider when filming these dark scenes especially when there’s fire involved. Wiring cables outdoors in an event where there’s a high possibility for young people to get a little intoxicated can sometimes end badly.

There were highs and lows in the video. I loved the beautiful close up shot of Omah Lay that the director took with a little slow-motion effect as the singer bopped his head to the beat, as well as where the group of people were dancing, and the camera man panned round the crowd, capturing the full view of all activities that were happening in that particular scene. However, personally, I would have loved to see Lay get more spotlight in the video. Bieber seemed to have gotten all the attention, possibly because he is the bigger star. I’m also rather confused as to why Lay and the decision makers at KeyQaad decided to settle for a dark, neon light type of video. I’m of the opinion that Colin Tilley was a bit complacent on this project, and it tended to show the work as slightly underwhelming. Also, the chemistry between Lay and Bieber was nonexistent. Both artistes didn’t seem to have a connection, and this watered down the emotional effect of the video.