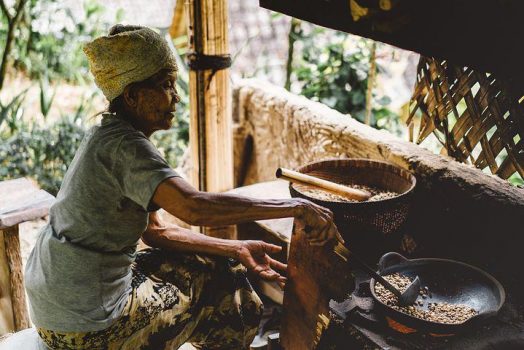 Are African Wives Doing Away with the Sacrocancy in Domestic Cooking?

Domestic Cooking as an activity is undervalued because it is not considered real work, even though it is still regarded as a woman’s role to do…

Modernism has brought with it the current argument of whether the kitchen is primarily a woman’s domain. As the world moves towards complete industrialisation — although some countries are way ahead of others — there is the growing notion that domestic cooking and general meal preparation are losing their cultural relevance, and becoming needless for African wives and women.

In many Nigerian and other African cultures, there is an art to meal preparation. It is not just in the cooking, but also in the serving and delivery of the meal. This is a responsibility that, without question, has been allotted to wives, to be passed on to their daughters. In my culture, for instance, in the Ijaw ethnic group in southern Nigeria, a woman does not only serve her husband a meal, but is also expected to gently rub his back as he eats, and kneel to offer him water when he is done. That barely happens anymore, which prompts a “why?” In the neighbouring Ekpeye ethnic group, also in southern Nigeria, when a new bride is escorted to her new home, among the motley of things given to her such as a lantern, and a hen to symbolise fertility, a knife is added to show that she can use the tool to prepare food for her husband and family. There is also the inferred opinion of a proper “wife material” who possesses the perfect qualities in addition to being beautiful. One of these “perfect qualities” is, without a doubt, knowing how to cook and how to manage a home. In many parts of Africa, a woman who cannot cook may be said to have “failed as a woman.” There is also the common expression that designates the route to a man’s heart as, primarily, his stomach. This purports women as “homely,” and anything else falls short.

In 2016, the Nigerian President, Muhammadu Buhari, voiced during an interview with the BBC, that the position of his wife, the First Lady, belongs in the kitchen and in the “other room,” a euphemism for a sexual role. The President subtly implied a negative stereotype that wives are only good for cooking and for sexual gratification.

In Yemisi Aribisala’s Longthroat Memoirs, the pleasurable book on Nigerian food, the chapter “To Cook or Not to Cook” stands out for me in its description of the sentimentality attached to women and cooking, the tasking nature it demands, and the expectation from women to endure the process with relish. “I remember the pressure of answering the call of owning one’s kitchen – the first steps of learning how to do a moin-moin wrap as a child. I was the first daughter so this pressure was tenfold. No Yoruba girl worth her dawadawa dared progress into adulthood without knowing how to secure a moin-moin. It had to be wrapped and placed perfectly so that it didn’t leak into the steamer. The pressure was absurd but the threat was tangible. If you couldn’t wrap a moin-moin, you were in danger of becoming an incompetent woman and wife, an embarrassment to the house in which you were raised, perhaps even ineligible for marriage. So I was admonished,” Aribisala narrated. In the chapter, there is an anecdote where Aribisala’s mother-in-law shows her disdain for married women eating out with their husbands, assuming them worse than prostitutes, for it was one thing to let a husband eat, and another to eat out with the said husband. Again, a negative impression that a woman eating out is a pointer toward promiscuity.

Today, the likes of Aribisala’s mother-in-law are rarer to find. Now, married women who opt to not cook are not precisely branded as prostitutes, but the view about such women is still far from congenial. The waning interest of women to cook for their households is mostly still regarded as an “unAfrican” trait.

Women’s participation in the global labour force has increased. Cooking for households, like cleaning, childcare, and other domestic duties, is an essential activity that is relegated to women and girls. These activities are considered unpaid care work. “Unpaid care work“ because a third party can do them for a cost. With better education, women now have the opportunity to decide on better career paths. And in more households, both men and women contribute to the household income. Globally, 47% of working-age women participate in the labour force. In sub-Saharan Africa, approximately 69% of women are active in the labour market. This is in contrast to the past when women’s sole responsibilities were mainly internal, confined to the household, while the men engaged in more external occupations to provide for the household. In the Yoruba culture in Nigeria, it was not unusual to have wives bear a grudge when their husbands ventured into her holied jurisdiction — the kitchen. In a paper on the “Preparation for Marriage,” the writer, Eva Abel, describes that the Akamba people of Kenya prepare young people for marriage by teaching them the distinctive roles of men and women. Men were for hunting and herding, while women were for cooking, fetching water, and collecting firewood.

In the book, Culture and Customs of Ghana, Steven J. Salm and Toyin Falola explain that in the Ga ethnic group’s traditional structure of the family, teenage boys from at least thirteen learn an occupation or other male-inclined activities, while young girls engaged in household domestic activities. This is also similar to the Akan ethnicity’s practice. It further explained why parents were reluctant to allow young girls to go to school, and when they did, the burden of combining domestic chores and learning was more than for boys.

Cooking as an activity is undervalued because it is not considered real work, even though it is still regarded as a woman’s role to do. Even as women are becoming more active in the white-collared workforce, the tasking part of being solely responsible for domestic activities is still expected. Ironically, when a wife cooks for a wage, or as a business, it is considered work, but within a household, it is not. It is not far-reaching to assume that caregiving and domestic work are contributing factors to why there are fewer women in the workforce than men, why women work lower quality or less-paying jobs than men, or why there is still a gender pay gap that benefits men more.

During the COVID-19 pandemic, in Germany, mothers decided to present a bill to the government demanding to be paid for the care and maintenance provided to their children during the lockdown. While they were heavily criticised for neglect, it shone a light on the value of labour that is being undermined. In 2020, the global cost of unpaid labour is estimated between 10% to 39% of GDP. In the book, “The Growth Delusion: Wealth, Poverty, and the Well-Being of Nations,” the author, David Pilling, reveals that as of the year 2000, the statistical cost of unpaid labour was worth about 45% of all economic activities, and nutrition (which could include cooking) was valued at £164 billion.

The push for gender equality and a better representation of women as more than being capable to take control in the kitchen is getting more awareness and creating better level grounds for women to decide whether or not to engage in domestic activities. Even though the changes happen rather slowly, stereotypes still exist. For example, the American fast-food franchise, Burger King, had to take down a campaign ad in 2021 that read, “Women belong in the kitchen,” apologising for the miscommunication. Even with progress in the status of women as relegated to the kitchen, there is still more work to be done. As more women have more economic power and financial freedom, those who can afford to outsource cooking, and other domestic activities, to use the time for other activities (maybe work-related) are choosing that alternative altogether. The World Cooking Index reports, however, that women are still cooking twice as much as men in households. In West Africa, even when men and women take up unpaid care work, women are still the least favoured.

Yet, some argue that it is necessary to keep the tradition alive. This brings about the conversation that technology has made women relaxed and lazy, that using newer machines like dishwashers and washing machines that make domestic work more bearable has made women complacent. Men also acknowledge, but rarely openly admit that cooking, together with other domestic activities, and working a formal job, are demanding activities. For instance, in this Facebook post, men confess that multi-tasking a formal job and handling domestic life is stressful. Even though the assumption for some is that technology takes the fanfare out of meal preparation, some women find a well-equipped kitchen with utensils that take away the labour from cooking as empowering.

Most interesting today is that there seem to be far more professional male chefs than women around the world. If one did a search of the top chefs in Africa, more male names will roll up than females. The picture of a man in the kitchen has become glamourised. And when treated as a profession, there is again the new belief that men are better skillful and resilient than women in work environments. Men in Africa are realising now that cooking, like other domestic duties, is essential for survival and is not to be defined as a sole feminine charge.

People are now realising that preference and choice take precedence over traditions and societal expectations. Some women like cooking and others do not. Some also consider it a labour of love to cook, which supersedes being obligated to. Perhaps the important question should be whether people, regardless of gender, should engage in more domestic activities including cooking. Cooking at home is still proven to be healthier and cheaper than eating out, and possibly more convenient for living within a budget.