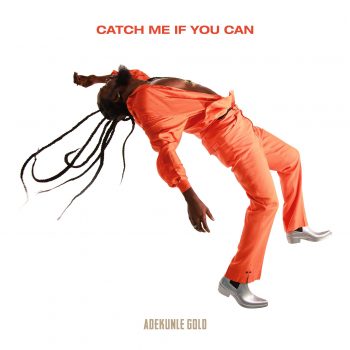 On Adekunle Gold’s ‘Catch Me If You Can’ Album, The Artiste Races Deeper For Evolution

Adekunle Gold’s ‘Catch Me If You Can’ is a statement record, with high replay value, a shaky content direction, amazing collaborations, and endless harmony. It radiates as Gold’s most intimate, confident and profound body of work, so far. Yet, it burns the bridges between Adekunle Gold and AG Baby, and unlocks the door to a world of possibilities for who AG Baby is, and who he can become…

If Charles Darwin was a musician, he would undoubtedly be Adekunle Gold. In barely six years, the Afro-fusion singer, real name, Adekunle Kosoko, has executed one of the most intriguing sonic evolutions of the 2010s. From the Juju-heavy cover of One Direction’s Story of my Life, which also became his breakout hit, in 2017, to the just-released fourth studio album dubbed, Catch Me If You Can, Adekunle Gold, now rebranded as AG Baby, has been in a race with himself, outdoing himself in his mission to escape the boundaries of creative expression.

In one of his famous newsletters to his fans, dated December 2019, AG Baby declared, “I want my past to be silver and my future to be gold. I never want to be stagnant, I always want to do better than I have before. I always have to outdo myself no matter how familiar you are with the outdone version of me.” And with Catch Me If You Can, he fulfills this desire one more time, taking his sounds faraway further from the Juju-pop he began with, to even more sombre, lighthearted RnB/Soul-fused Pop plains.

Since he began this evolution with his second studio album, in 2018, dubbed About 30, every new project shows AG Baby reconstructing his narrative, with deeper exploration of the RnB space. And for those who understand the dynamics of his evolution, it was one hell of a risk! On one hand, there was the potential for Adekunle Gold’s fans to dislike his shift, preferring his more culturally-flavoured vocals; while on the other hand, he could fail to capture a new audience solely because the market he was switching into was becoming saturated at the time, and distinction could have been difficult.

Nonetheless, AG Baby took the challenge, making an overall switch, from his new jiggy fashion sense, to his new buff gait, and chart-topping releases. From the young graphic artiste screaming ‘Oluwa (God) answer my call o,’ to the 34-year-old father screaming ‘AG Baby is your baby,’ it has been one heaven of a confidence spike for Gold.

In CMIYC, Gold continues his treatise on self-discovery, which his last project, Afro Pop Vol 1., emphasised. From the opening song, “Born Again,” featuring the Malian chanteuse, Fatoumata Diawara, Gold restates his quest for self-liberation. ‘It dawned on me/ I’ve been living for people but me/ But better late than never/ Now I don taste freedom/ I am a new man; forget what you know/ Now i don find my voice; deal with it I don’t answer to nobody.’

He continues the commentary with the upbeat Afro-pop bop, “Win,” where he goes on a self-extoling spree, down to “Mase Mi,” where he emphasises his unflinching self-confidence and affirms God his biggest source of inspiration and supporter. With AG Baby, it has become routine to use his music as a form of pep talk, preaching positivity, perseverance and courage. And in CMIYC, the narrative is same, and more intimate than ever before.

AG Baby’s race towards evolution is also dragging a lot of positive ripple effects for the African community. As his counterparts, Wizkid, Burna Boy, among others, continue to use their sonic evolution to garner more global support for the Afro music community, Gold’s work is an extension of efforts bridging the diversity gap and making Afro-music the centre stage of global music.

With “One Woman,” he cocktails a fine mix of Afro-pop, with the American heavyweight Ty Dolla $ign, as they both adulate on a love persona. His chemistry with Ty Dolla $ign is more proof that black American artistes and other global heavyweights are neck deep into their love for Afro-music. Ty Dolla $ign can be heard over the verses repeating ‘Ofe Nsala’ and ‘Kpakam,’ like he was born and bred in Nigeria.

With Fatoumata’s duet, AG Baby brings on a very ancestral sound, fusing it with contemporary Afro-pop, encouraging more listeners to explore the sweetness of cultural Malian music, while still keeping it bougie and dancefloor-heavy for his diverse audience.

AG Baby’s songwriting evolves on CMIYC, as he goes more poetic than ever. On “Sinner,” he recalls the biblical story of King David and Bathsheeba, transforming it into a modern-day love tragedy. His lyricism shines for simplicity here, giving more power to his stretchy vocals to help finish the race.

We experience a supple balance of melody and message. Gold also retains the commercially appealing mundane vibes with songs like “More Than Enough,” “It Is What It Is,” and the Stefflon Don-assisted “FYE,” where he goes into some softcore sensual adulations and vane commentary on his net worth. Interestingly, he understands the pacing to his discography, infusing the party anthems, while serving new introspective bops.

AG Baby has always been a bit of a strong-head. Despite being born into a royal family in Lagos, Nigeria’s economic capital, he still had to tow the lines of every other aspiring middle-class Nigerian. Working several years as a professionally-trained graphic designer, he waltzed his way into the hearts of Nigerians with his series of photoshop caricatures, earning him the title ‘King of Photoshop’ on social media.

After garnering bits of attention with his football banter, Photoshopping images of himself with Nicki Minaj, Rihanna, and even the Monalisa painting, he began to dish out more music. From his 2017 takeoff point with the Olamide-owned YBNL records, he began to have a rather progressive stint. While the Nigerian audience were beginning to get comfortable with his Juju-fused rhythm, AG Baby always saw the bigger picture, and he has never stopped bringing this to reality.

With his vocals, AG Baby blends in a more assertive alto (another key element in his rebranding). He constantly retains the high pitch that is laced on “Afro Pop Vol 1,” and its predecessor, “About 30,” but throws in a lot of vibratos and falsettos with his hooks in CMIYC.

Produced by a team of legends, from TMXO, to Blaise Beatz, down to Spax, among others, the album feels like a smooth blend of feel-good energy, and mid-tempo happiness. It blushes with AG Baby’s cadence, which peaked on the title track which closes the album, as a sombre AG Baby throws in a Sam Smith-esque flow on the drowned out Disney-type piano chords.

In Adekunle Gold’s ‘Catch Me If You Can’, there are a few issues, as is captured more in AG Baby’s rebranding. In CMIYC, he closes the curtains on his earlier personas, introducing the deeper version of his new self, tagged subtly as ‘Bad Boy Deks.’ In his quest to define his image, we are lost in some subtle yet existent identity crisis. Is this the AG Baby the romantic lover boy, or the self-praising lustful lover, or the defiant hustler and revolutionary? As it appears that he attempts to combine all three, there are blurred lines on what his niche really is, distracting the storytelling on his project from the music itself to his personality as an individual.

Also, cohesively, CMIYC feels like an incomplete playlist. It fails to climax, at the end, making the project feel like a highway to a never-ending oblivion. A more strengthened track listing (especially one with the right amount of drama) could have helped achieve this at the end. However, as far as Afro-fusion goes, AG Baby has and is doing solid work.

Married to his long-time sweetheart and music whiz, Simi Kosoko, better known as Simi, and with their first child Adejare, AG Baby continues to be a lover of love, and the ‘Bad Boy Deks’ narrative might be a less productive fictional character than his loverboy alter ego, in the long run.

As an indie artiste, AG Baby packs the potential for exponential growth. His sold-out shows and headline openers in London, Dublin, and many other global spaces have continued to redefine his drive towards his craft. His main motive seems to be the urge for self expression, telling his own story his own way rather than satisfying current (and ultimately volatile) market demands. With his Pop-Rnb transition, he seems to be killing many stones with one bird (pun intended), balancing his rhythm and message.

However, like with anything related to identity, much care is needed before we all get distracted by the details and not the full image. AG Baby also has more work to do with Afro-fusion, as he could successfully explore more native African sounds, from Highlife, to Rumba, down to Soukous, and even his first love, Juju music. With his current template, he holds the power to modify genres, making them as appealing and woke as possible for his current generation of listeners. And with that much power, comes more responsibility, both to his art and to his audience.

Overall, CMIYC, is a statement record, with high replay value, a shaky content direction, amazing collaborations, and endless harmony. It radiates as Gold’s most intimate, confident and profound body of work, so far. Yet, it burns the bridges between Adekunle Gold and AG Baby, and unlocks the door to a world of possibilities for who AG Baby is, and who he can become. And all the time, watering the garden of Afrobeats to thrive.

Chinonso Ihekire is a music journalist, filmmaker and photographer based in Lagos, Nigeria. His criticism has been published in several European, and Pan-African publications including PAM, Guardian Life, Wakonte, Afrocritik, among others. He believes art is a tool for revolution, and he continues to preach the gospel of culture with his artistry.