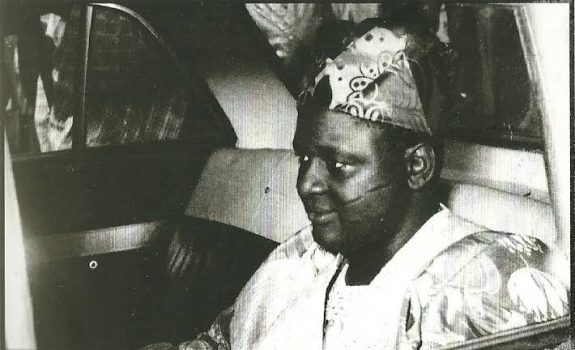 One thing many knew about the Aláàfin was his deep love for beautiful women. Oba Lamidi’s father was said to have had over two hundred wives. However, Oba Lamidi married only eighteen, some in his old age…

The entire Yorubaland of Nigeria has been in deep mourning since the 22nd of April 2022, following the demise of the great Aláàfin of Ọ̀yọ́. Indeed, a great elephant has fallen, and the people are sad that it cannot stand on its feet again. When people die, weeping lasts for a long time, but in the case of Oba Lamidi Ọláyíwọlá Àtàndá Adéyẹmí III, there is some rejoicing because the Oba lived a fulfilled, great life.

Oba Lamidi III was born on October 15, 1938 to the Awolodu Royal House. His father was Oba Adeniran Adeyemi II, and his mother was Ibironke of Epo-Gingin. From the day he was born, his father loved him deeply, and his deep love for the young Lamidi was very much evident in how he made sure that he acquired as much education as possible. Some who knew his father in his time said he groomed his young son into kingship from the moment he came into the age of understanding. Oba Adeniran ensured that his son grew to become a man first before becoming king.

Oba Lamidi read widely. Although, he didn’t leave Nigeria to get a foreign education as was common in those times. He was thoroughly schooled on the ways of the Yoruba court by the Aláké of Ọ̀yọ́. He was also educated by the great Kòfó Àbáyọ̀mí on the aristocratic carriage that came with sitting on the throne, as well as exercising its power. Lamidi’s mother, Ibironke, also put in great effort to ensure that he was properly trained by his tutors. She perfectly understood that kings were made from the cradle. She could have done more for her young Lamidi, but she died very early. All thanks to Oba Adeniran, Lamidi got more than enough education, most of which he would appreciate more on his ascension to the throne as Aláàfin in the coming years.

In 1970, Lamidi succeeded Alaafin Gbadegesin Ladigbolu II as the Aláàfin of Ọ̀yọ́. This was just after the end of the Nigerian Civil War. Oba Lamidi ruled with great wisdom, ease, and dexterity. He handled the affairs of his people and treated serious issues with great care. One of such was his promotion of Yoruba art and culture across the country. He did these with great passion and concern. Many of his subjects were not at all surprised that he could rule so greatly. They always mentioned that, Lamidi, a direct descendant of Oranmiyan would be nothing short of great. And they were not wrong at all.

Despite the weight that came with being an Oba, Lamidi still engaged in the ordinary things that made human existence more colourful. He loved the traditional talking drum, or gangan, which is symbolic of the Yoruba people. He would interpret the drum flawlessly and form a camaraderie with the players of the drum. The Oba was also a man of strength. He channeled that strength into boxing. And was he a great boxer? The Oba was rich in brain and brawn. What better combination could there be?

The Aláàfin was humble, and he formed cordial relations even with people who were not of royal blood like he was. In a recent article written by Tade Ipadeola, Tade notes thus, “Aláàfin Ọláyíwọlá Adeyemi made friends even with people his upbringing taught him to regard as commoners. He made friends with these people even when he knew that they had strong republican inclinations. One such dynamic which I observed at close quarters was his relationship with my late father, Àyántádé Àtàndá Ìpàdéọlá.” Oba Lamidi knew and understood that friendships did not have to be hinged on class and wealth. He chose his friends well, and made the most of the times they spent with him.

One thing many knew about the Aláàfin was his deep love for beautiful women. Oba Lamidi’s father was said to have had over two hundred wives. However, Oba Lamidi married only eighteen, some in his old age, and he always attended events with them.

Oba Lamidi spent his last days at the Afe Babalola University Teaching Hospital in Ekiti State where he died after complications from a prostate disease. On receiving the news of the Oba’s demise, 2023 APC Presidential aspirant, and former Governor of Lagos state, Bola Tinubu said in a statement, “The black race has lost a titan who will be sorely missed.”

Oba Lamidi Ọláyíwọlá Àtàndá Adéyẹmí’s years were full of life, and his reign, fifty-one-years long, is the longest ever recorded in the history of Oyo.

Ijeoma Anastasia Ntada writes and reads poetry, fiction and non fiction. She has a couple of poems published in the Love Anthology, The Ducor Review, Visual Verse, Praxis Review and other places. She is also a photography enthusiast. She takes beautiful photographs and makes them art. When Ijeoma isn’t studying to become a Medical Laboratory Scientist, you’ll find her talking about afro hair, femininity, and embracing all of her girlhood.