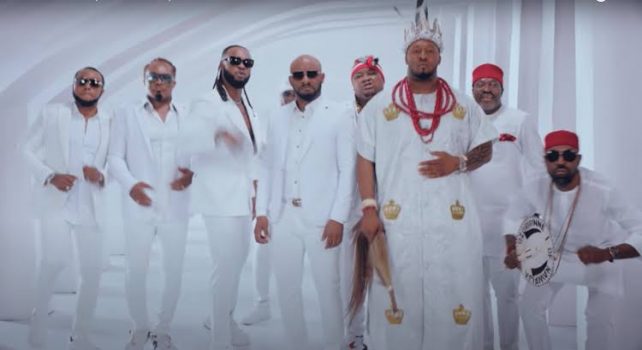 If you are reading this right now, congratulations for making it to November. October, for a lot of people, was a Squid Game of sorts. But we are glad you made it! And if you are like us, it means you pulled through with the help of music. Interestingly, these are exciting times for Nigerian music, which has been on a steady, progressive rise in the global musicdom. From Ckay to Wizkid bagging platinum certifications with their records, to both acts making Billboard history, it has been a litany of achievements for the industry. While these achievements are intriguing, it is actually the scintillating, slow-burning or party-popping records which ensured our sanity that we adore the most.

Here are some of the hottest songs that rocked our October for us:

In the days that shape Victony’s rebound from the ghastly auto accident that kept him from the bustling music scene since April, “Holy Father” is one golden assist that birthed one of the most vibrant Mayorkun jams of all time.

“Holy father, holy father I’m screaming my lady gaga, she got me in my feelings, i be Adam for this Garden of Eden, holy father my holy father,” his silky vocals flow over the soothing bass lines. Apart from the ever-endearing concept of romantic love, the song actually soars for its infectious groove just when you hear Mayorkun’s favourite magic words: ‘Ge Ge (Gay-gay). The Semzi-produced record is a standout jam from Mayorkun who just released his sophomore album dubbed, “Back In Office.”

“I just wan’ sip my alcohol/ I don’t wanna reason bad things no more/ I don’t want to go back to where I dey before/ Make nobody come here come disturb me Jor Jor Jor,” the easy-going groove that laces this Joeboy mega-hit is as soothing as drinking a cup of iced tea. The optimistic record caused quite a stir on social media, as many Nigerians took the viral #Alcoholchallenge to extremes, and started consuming toxic substances like antiseptics. The EmPawa signee had to come out on social media to warn his fans against such extreme behaviour. However, apart from the beserk vibes that trailed the song, the Tempoe-produced joint remains one of the most vibrant grooves to kiss our dancefloors and ears.

When one of Nigeria’s most talented guitarist joins two of the most sonorous voices in the Afro music scene, the result is likely to match a sonic wonder like Fiokee’s “Follow You,” featuring Chike and Gyakie. The soothing love melody is one of Chike’s best verses this year, among all his releases, and it is also one of Gyakie’s most soul-steeped collaborations with a Nigerian artiste. The DeeYasso-produced song is mesmerising for the choice of features, as the Ghanaian love queen and the Nigerian Boo of the Booless are one of the most enigmatic love singers in the continent. Chike, earlier this year, also released a cover of Gyakie’s hit-single, “Forever,” which heightened anticipation of a duet between the two singers. With “Follow You” that craving is satisfied.

Whenever the fraternal highlife duo, The Cavemen., collaborate with the Afrobeat royalty, Made Kuti, it is always a blessing to the ears. Their latest effort dubbed, “Biri,” is a powerful fusion of Afrobeat and highlife, breathing energy into the air with its euphoria. Made Kuti switches on his sax energy, with a ting of Jazz in this duet. The song which was produced by the singing brothers themselves, is a peaceful anthem that preaches the possibilities of calmness, despite the raging storms of life. Their joint soulful chant, “Biri Kam Biri” makes the record very emotive, and boosts the replay value of the song.

For the Gbagada-bred superstar, the eponymous record, “Daniel Benson” isn’t just a vibrant opener for his debut compilation soundpiece but is actually Buju’s ‘man-to-mirror’ moment of self-affirmation, and an invitation to others to the mental pilgrim of optimism.
“Ewo mi Daniel Benson/ Ti ba ko orin e ma jo bi Michael Jackson,” Buju’s mid-tempo vocals spiral into a beautiful bloom on the Timi Jay-produced record. Buju’s Daniel Benson currently sits as a fine bridge between a powerfully emotive and introspective record and a dancefloor aphrodisiac. But with Buju, we are not surprised.

“Eh eh nwanne/ If it’s a hit, aká anyị dị ya/ Obodo ekwelugo oo/ Anyanwụ achawago oo/ Ànyị apụta gọ/ Ife e mee bẹ gọ.” Only five seconds into this song and the Kporokoto master, Flavour, already has you hooked with his energetic tune. The versatile singer kept our feet on fire, with this self-assuring record. The song itself is a typical highlife song that’s akin to praise singing. It reels with names of popular socialites, such as Obi Cubana of the 346 cows fame, among others. The Masterkraft-produced jam is a follow-up to his Afro-fusion banger dubbed, “Berna,” featuring Congolese legend, Fally Ipupa and Tanzanian superstar, Diamond Platnumz.

“Overthinking no dey solve problem/ Better days are here ma wo be!” it seems the SAPA (Colloquial Nigerian slang for extreme poverty) has attempted to visit even the high and mighty in society, because nearly everyone is singing about it these days. With this Zlatan bop which precedes his soon-to-be released album dubbed, “Resan,” the high-tempo record flows with a vibrant optimism. On this song, Zlatan unleashes his mellow mien, as against his usual party-popping enthusiasm on his other records. The Niphkeys-produced song is a fine Amapiano-fused street-hop record that kept our bodies on a never-stopping groove.

Chinonso Ihekire is a freelance music and culture journalist based in Lagos, Nigeria. His critiques and writings have appeared in pan-African publications such as The Guardian, Wakonte, and More Branches. He enjoys exploring and documenting Africa’s thriving contemporary art evolution, especially in Music, Film and Lifestyle. Reach out on Instagram @Chinonsotherevolutionary and Twitter @ChinonsoIhekire