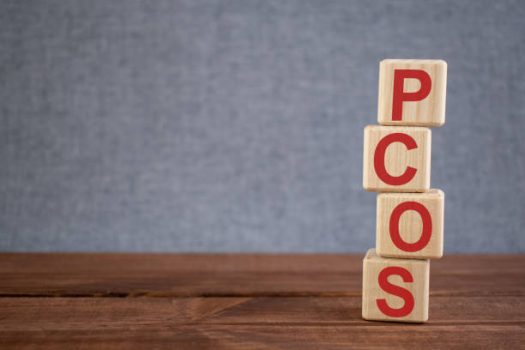 …another reason cases like Polycystic Ovary Syndrome  are largely undiagnosed until later is because women have a hard time seeking medical assistance as conversations around female reproduction and menstruation are somewhat difficult to talk about, especially in seemingly conservative societies where there are largely still period stigmas…

On December 28, 2021, the popular Nigerian comedian, skit-maker, and content creator, Gloria Oloruntobi, popularly known as Maraji, released a vlog post on her YouTube channel discussing the recent events in her life: being a newlywed, pregnancy, and handling changes during the first trimester. Three minutes into the 23-minute-long video, Maraji, in a collected fashion, casually revealed that she has PCOS, a reproductive health challenge. Two and half minutes further in, she talked about her initial worries with conceiving and the proactive steps she had taken that would subsequently help facilitate the process, as well as concerns she had about a possible miscarriage. All of these, she explained, are complications with having Polycystic Ovary Syndrome.

I remember watching the almost six minutes long revelation,  and my emotions building up in a flurry. The experience was like unearthing an artifact. In the early parts of 2019, I was medically diagnosed with PCOS, after two months of back-and-forth in the hospital, medical tests, and emotional tumult. However, despite that, statistically, one in ten women have PCOS globally, I had always felt alone in the struggle with the disorder. Seeing Maraji casually talk about her PCOS journey, almost comically, made me feel visible.

Polycystic Ovary Syndrome is one of the top health conditions that affect women of reproductive ages. Others include endometriosis, cervical cancer, primary ovarian insufficiency, and uterine fibroids. PCOS symptoms include, but are not limited to, irregular periods, excessive hair growth, bloating, severe acne, male pattern baldness, polycystic ovaries, and infertility. Although the exact cause of PCOS is still unknown, several factors such as heredity, hormonal imbalances, and high levels of insulin may cause the disorder.

To understand Maraji’s initial agitation, PCOS is the most common cause of infertility in women, and some women only discover they have the condition when trying to get pregnant even when symptoms may have appeared during teenagehood. In my case, at 13 when I had abnormal uterine bleeding for over three weeks, at the time, there was no mention of any condition or reason why this could have happened. Drugs were administered to me, and I was set back on my way. It took another three years to figure out something was amiss when unusually painful cramps with abnormally long length of periods became frequent. At 18, after having six months of amenorrhea without any indication of pregnancy, I sought medical attention.

Benedicta (real name disclosed) has PCOS, blocked fallopian tubes, and secondary infertility. She first found out about this condition when trying for a baby. “Shortly after my wedding,” she said, “I would have these long spells of missing periods, and nobody could explain why I was having missed periods without conceiving. Even though as a teenager I had experienced it, – about four months of missing period. But even then, this (PCOS) wasn’t mentioned. They just said it was a normal occurrence with girls who were starting their menstrual cycle at the time.”

Women’s reproductive health is oftentimes perceived as complex, which is why misdiagnosis tends to occur. Benedicta revealed, “The first medical report I made said I had an ovarian cyst. In the next scan, the cyst had ‘miraculously’ disappeared. After another long spell of missed periods, another scan said I had a retroverted uterus. Then later, just hormonal imbalance… It was when I went for IVF consultation that I first heard the word PCOS.”

Women’s health conditions, especially those in Africa, are also more likely to be dismissed and/or trivialised. When I first sought medical attention at 18, my symptoms were dismissed as a hormonal imbalance that would correct itself in time. Unfortunately, it didn’t. There is a pain gap in the health sector which causes women in the health sector to either be underdiagnosed or untreated.

Abigail (real name disclosed) is in her late twenties and is being managed for dysmenorrhea from causes yet to be diagnosed. She has had this since her teens. “The pain is beyond excruciating… there were times it feels like death… somehow, I knew something was wrong,” she said. “Nausea, burning sensations, blood clots, which have gotten worse over the years.”

In my experience, another reason cases like these are largely undiagnosed until later is because women have a hard time seeking medical assistance as conversations around female reproduction and menstruation are somewhat difficult to talk about, especially in seemingly conservative societies where there are largely still period stigmas.

As a teenager and youth-adult experiencing irregular periods, I felt the oddity when conversations about periods, menstrual cycle, and ovulation would come up in conversations with my peers.

Mercy, (real name disclosed) now 26, was diagnosed four years prior with PCOS. For her, there was the fear of being stigmatised. She said, “It is not something you want to discuss with everybody. When you have feminine discussions, you don’t want to say things that would give away that something is wrong, so you tend to not give too much information.”

That is why conversations around these conditions are necessary, and creating awareness is important to create an inclusive society for all women. Also, in African societies where women still bear the brunt of infertility, a safe environment where women are not branded is necessary.

Although there has been advancement in healthcare and access to medical information, treatment, recommended lifestyle adjustments and healthy living, women’s health related issues are still largely under-researched and underfunded.

In all these, the hardest part is the mental toll on the individual, and how it affects living and relationships with others. Especially as the larger populace is still ignorant about mental health awareness in Africa. Psychiatric conditions such as anxiety and depression have been associated with both PCOS and endometriosis.

Benedicta said, “I have had several seasons of depression, I feel terrible that I can’t conceive like other women… It does affect my everyday life, mood swings, and the mere fact that you are not like every other woman and your adult life isn’t as pleasant and fulfilling as you would ordinarily want.”

For Abigail, it is the embarrassment that comes with writhing in public, “I can’t read or be productive. When I don’t go to work and I tell people it’s menstrual pain, they don’t understand and pass it off as what every other woman passes through.”

There is a need to continuously learn and adopt empathy, break down cultural and social biases, and create an inclusive environment for all women to reflect on the apparent progress we have made as a society. There is now a global drive to create awareness about these conditions. September 1st has been recognised as  World PCOS Day. In Africa, too, there are (although a few) foundations committed to creating awareness around PCOS.