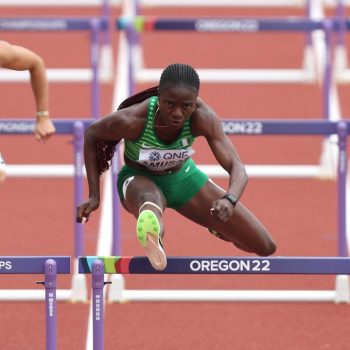 Tobi Amusan and the Journey to Becoming World Champion

Amusan’s first sporting interest was football, but after observing her tenacity on the pitch during training, her coach at the time advised that she was better off on the track and field…

“Unknown now, but I will be unforgettable… I will persist until I succeed…” A tweet the Nigerian athlete, Oluwatobiloba ‘Tobi’ Amusan, made on November 8, 2016.

Six years on, and Tobi Amusan is a globally-celebrated athlete. At the moment, ‘the breaker of records’ is a moniker that would as well suit Amusan, as she has gone on to achieve incredible feats in the 2022 World Athletic Championship games, where she did not only win gold but also broke world records in record time. True to her words in her 2016 tweet, her name has become a household one, a name no one will forget in a hurry. And like the ellipses in her sentence, there will be more victories to be seen in the coming years.

She joins a list of Nigerian sportspersons that have world records to their names. In 2021, the track and field athlete, Blessing Okagbere, entered the Guinness Book of Record for making the most appearance in IAAF’s Diamond League meetings. Similarly, Nigeria’s table tennis player, Quadri Anura, broke into the Top 10 International Table Tennis Federation (ITTF) world list, becoming the first-ever Nigerian, African, and Black person to be rated in the international top 10 rankings. Also, Nigeria’s first Olympic gold medalist, Chioma Ajunwa, holds the record for being the first person to represent the country at the highest level in sports. She was a member of the Super Falcon in the 1991 FIFA Women’s World Cup in China, and then in 1996, won a gold medal at the Atlanta Olympics in sprints. The list goes on.

Amusan became the first African to win a gold medal at the World Athletic Championship held in Oregon, in the women’s 100m hurdle, and the best in the history of the games, finishing at a 12.06s time. This comes after breaking a world record of 12.12s at the event’s semifinal games, and carting home a $100,000 cash prize for breaking a world record. It has been an interesting past week in the sports scene in Nigeria, not just for Amusan, but for other athletes, too, as Ese Brume, also from Nigeria, won a silver medal in the women’s long jump, and the Nigerian footballer, Asisat Oshoala, won the CAF’s Women’s player for the fifth time in succession. Nigerians watched with delight and pride as the country’s national anthem was sung at the medal decoration ceremony, and Amusan’s eyes gave way to tears, perhaps as she thought about the years of hard work and diligence that brought her to that celebratory moment.

They say the road to success is long and paved with obstacles — a hurdle if you may — and the unrelenting must be ready for adversity. Amusan’s case is not an exception. Born April 23, 1997, to parents who were school teachers at Ijebu-Ode, southwestern Nigeria. Her father was initially opposed to her becoming an athlete, so much that at a point, Amusan revealed, he burned her training gear in order to dissuade her interests and allow her to focus on other, and perhaps, ‘safer’ career paths. But thankfully, as Amusan revealed, she had a supportive mother who believed in her dreams and would cover up for her while she trained. “My mum would tell my dad I was going to church while I sneaked to practice or tell him I was going to a school debate while I went to an out-of-state competition. That’s where it all started. My dad got really mad one time when he found out [I was running]. He burned all my training gear and told my mum that’s the last time he wanted to see me in a stadium,” she told BBC Sports in an interview conducted on July 25th.

Amusan’s father, Kehinde Amusan, has also spoken up about his discontentment with Amusan’s engagement in sports. Having been a football enthusiast himself, and his wife also an athlete, he understood the challenges of pursuing a career in sports, and the financial strain it could cause to the family’s meagre income.

Amusan’s first sporting interest was football, but after observing her tenacity on the pitch during training, her coach at the time advised that she was better off on the track and field. Under the tutelage of Ayodele Solaja, her first athlete coach, she trained in 100m races, relays, and long jumps. She met coach Solomon Aliyu somewhere between 2013 and 2014 at the national camp, Sapele, Nigeria, in preparation for the African Youth Games championships. Aliyu, with the Vanguard, talks about how her discipline and dedication sprung her from a 14.60s speed at the beginning, to a 13.70s at the end of the training period.  He also talked about the setbacks she encountered before her big break in 2015. First, for missing out then, as a junior athlete due to a visa issuance delay which prevented her from competing at the World Junior Athletics Championships ironically, in Oregon, and second for being overlooked by officials because she was a rookie. Amusan was relegated from the 4 x 100m relay team for 2013 but participated in the long jump where she won a bronze medal. At the suggestions of the organisers, Amusan opted for the 100m hurdles where, on her first try, she won the race, and then later, earned a silver medal at the African Youth Games in Botswana in 2014.

“If it is run and jump, I thought I’ll do it,” she said in an interview. “I had played around with hurdles in practice but I had never competed before.” At the African Games Brazzaville-Congo the following year, Amusan won a gold medal at a record time of 13.11s, a win that became pivotal to her athletic ascension, and earned her a scholarship to study at the University of Texas, El-Paso USA.

As a student at El Paso, Amusan ran for the university, accomplishing great feats to her name. In 2016, she won gold in both 100m hurdle and 200m. She also became a silver medalist in the long jump at the C-USA Championships and was named the C-USA Female Track athlete of the year. 2018 was a decorated year for the athlete, as she won gold in the 100m hurdles, and then a bronze medal in the 4 x 100m relay with runners, Joy Udo-Gabriel, Blessing Okagbare, and Rosemary Chukwuma. She also won the African Championships in Nigeria in 2018.

Amusan went on to compete at the 2019 World Championship in Doha, finishing fourth place, and then fourth place again at the 2021 Tokyo Olympics. One could say she broke the jinx when she set a record for both herself and Africa, as in 12.42s, she won at Diamond League in Zurich in 2021, becoming the first Nigerian to win a Diamond League Trophy. After winning the World Championship in Doha, she said, “I was the ‘almost girl’, I got fourth, fourth, fourth. Now I finally did it.” She went further, “The goal is always just to execute well and get the win. So, the world record is a bonus. I knew I had it in me, but I could not believe it when I saw it on the screen after the semis. But it was just a matter of time.”

Tobi Amusan is now a World Champion, a Diamond League Final winner, a Commonwealth Games winner, and in the Top 8 at the Olympic Games. Her victory, again, is a testament that hard work, discipline, and commitment pay off. And her world record-smashing accomplishment, a celebration for herself and her nation. 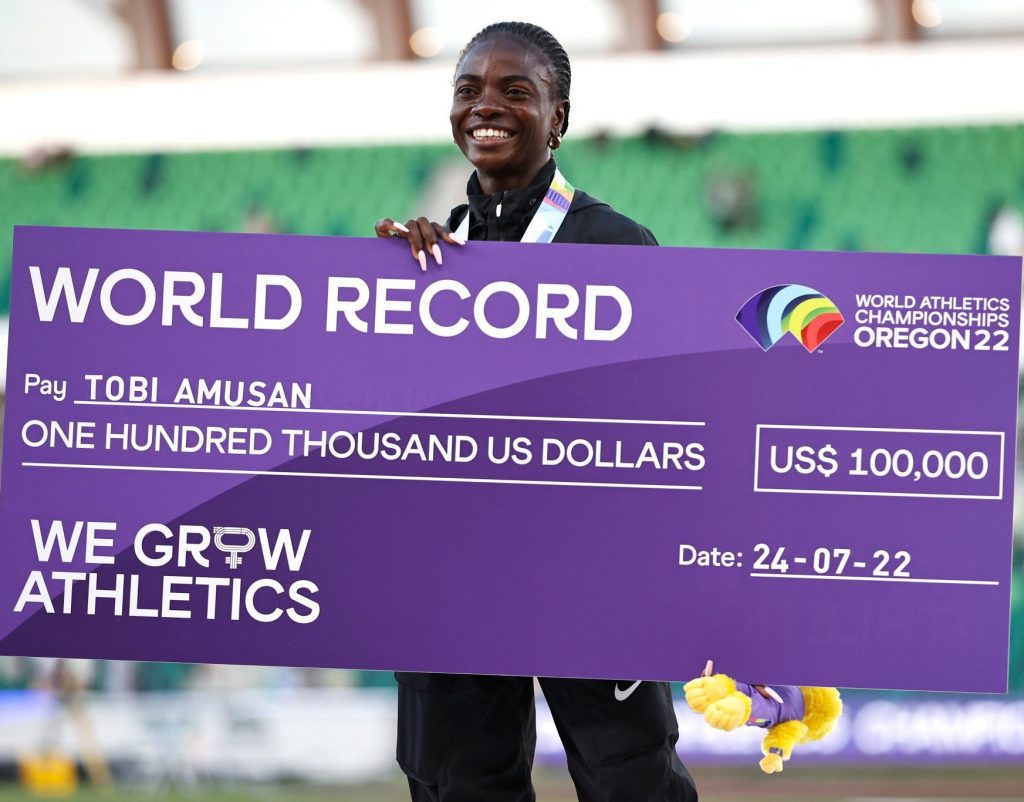 Her win rekindles the dwindling faith of Nigerians, that perhaps there is hope still for the country, and assures young Africans that racing to the very top is still attainable. Amusan made a post on Instagram a year ago with the quote, “Where others see obstacles, I see stepping stones to greatness.” Nothing could be further from the truth.