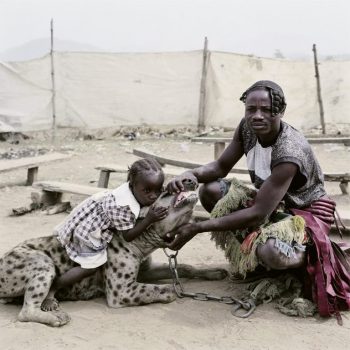 The Hyena Men of Nigeria: A Threat to Nature and Human Life?

As a child, Jahun recalls that he watched his father tame several hyenas, an animal considered one of the most dangerous in the forest…

The morning is cold. Hundreds of Nigerian children move in groups, their smart uniforms pressed against their bodies. They mutter in excitement, excited for another day in school. It is the city of Lagos; the conversation of these children is constantly interjected by the deafening slew of horns, shouts from noisy drivers, and infrequent fights at random corners. In a few minutes, these children will arrive at their respective schools, and study under the tutelage of a teacher.

This ambience of unrest is considered normal in the busy suburbs of Lagos.

But 400 miles north from this place, in the remote farmlands of Northern Nigeria, this definition of normal is discarded, and re-invented to fit the nuances of these Northern societies. Here, the laws of nature are twisted. Man and wild animals live as companions, both existing in the private spaces of each other. Here, in this Northern village distant from civilisation, children as old as their school-going counterparts in Lagos are trained to handle the most dangerous animals — snakes, baboons, and hyenas. Mothers leave snakes coiled around a newborn baby, while fathers teach their young sons to control, love, and tame hyenas. The idea of education is relegated to the background, and only accessible to the rich and middle-class families living miles away from these villages.

These people are the hyena men of Nigeria.

The story of Abdullahi Jahun explains the life of a child born into this atypical community. As a child, Jahun recalls that he watched his father tame several hyenas, an animal considered one of the most dangerous in the forest. In fact, in 2012, a hyena pack attacked a large African family, injuring 6 members and killing 2 children. But despite the evident dangers in dealing with these creatures, Jahun explains that his father made a living from this life, and that it was now time for him to do the same. Today, Jahun is a hyena man, a product of child-long training and close brushes with death. His father was a hyena man, his grandfather, and several other men before these two.

But the question still persists: who are the Hyena Men of Nigeria?

Primarily made up of Hausa men, the Hyena Men go into the darkest corners of the forest, hunting for hyenas, snakes, and baboons. Usually, they steal hyena pups from their mothers, and train them until they are fit to perform in their street circus. These men move from city to city, performing for a bewildered audience. In addition, these men sell some of these animals to zoos.

These men have no other means of livelihood away from this. It is all they know, all they have ever done their entire lives. But this lifestyle raises an even more important question: since the hyenas, baboons, and snakes are considered dangerous, how have these men managed to turn them into pets that do their bidding? How have they maintained a relationship akin to that of a man and a domestic dog?

The secret, many say, is black magic or juju.

African countries, especially Nigeria, are no stranger to the mysterious nature of black magic. There have been unconfirmed reports of mysterious happenings in Africa, with one report by Aljazeera making the rounds in July 2015. In this exposé, a witchdoctor, Manyauyau, explains that he could use his black magic powers to help politicians win elections. While there exists no scientific backing to support the existence of black magic, Africans, Nigerians included, have argued that it is real.

The same sentiment is loudly echoed in the community of these hyena men. From childhood, these people are fed with concoctions which are believed to protect them against these animals. To test the efficiency of these concoctions, children are placed in closed spaces with these animals. It is believed that this process will help children become familiar with these predators, preparing them for their life ahead.

While many have disregarded these practices as superstitious, adding that these men don’t show the world the scars from these animals, several hyena men have continued to dazzle audiences in many Nigerian cities with their performance.

Some have placed their heads right in the mouth of the hyena, while many others, seemingly absent-mindedly caress the teeth of these animals.

As expected, the relationship between the animals and the men is best described as a love-hate relationship. These men have scars lined across their arms, some as long and deep as their love for these animals. But it is the life they have known since birth, and any other thing equals being thrown into limbo.

But away from the novelty of these circus performances, or the interesting lifestyle of these people, the truth cannot be ignored for so long. Not only does this interrupt the interactions of the ecosystem, it also poses a mortal danger to every human involved. Furthermore, it is an extreme case of animal brutality, which could have an adverse effect on Nigeria in the long run. For instance, this unchecked wildlife trade could put endangered species at a higher risk of extinction. In fact, Nigeria was once believed to have the most diverse population of monkeys and gorillas, but all thanks to these endless hunts, the diversity in the forests has dwindled.

At the same time, animal brutality isn’t such a big deal in Africa. For example, muslims in Nigeria still organise street duels between rams, a custom that has led to the inhumane deaths of these animals. In a recent Afrocritik piece on the subject of animal abuse, writer, Nicole Kemenanabo writes that, “The Igbos, for instance, make sacrifices for atonement or purification; to ward off malevolent spirits; for thanksgiving; and for funerals, often killing animals such as goats and cows during these rituals.” These ritual killings are rampant among several other Nigerian cultures.

Of course, the lifestyle of the Hyena Men has been met with scorn and anger in the international community, with animal preservation organisations calling for a stop to this practice, asking that new laws be introduced to tackle this custom. In the global west, passion for animal and animal rights cannot be overemphasised. In the earlier days of the year, Kourt Zouma, a professional footballer for West Ham football club was charged to court for maltreating his pet cat. Recent reports from Sports Illustrated suggest that the football star could be persecuted for his abuse against the animal.

Also, Pieter Hugo, the photographer who put the Hyena Men on the map, after his compilation, The Hyenas & Other Men, which was released in 2007 writes, “I never saw the hyenas do anything aggressive but the baboons were a different ball game. I felt really sorry for them because they displayed human-like emotions. They were almost self-conscious in a way, and it was very sad to see them in that environment, chained up. They would be much more rebellious and naughty than the hyenas and the guys would be quite severe with them, and that actually bothered me much more than the hyenas which were happy as long as they got fed. Their needs just seemed much simpler than those of the baboons.”

Unfortunately, these safety concerns transcend the circus performances; there are also major concerns about the medical benefits of hyena dung and saliva. Also, these practices — the poachings — have caused a ripple effect in the Nigerian forests. Nasiru Wada, a traditional leader in Northern Nigeria has decried the lack of hyenas in the forests, an eventual effect of the constant poachings. He admits that hyenas are now harder to come by, a factor that could slowly send the Hyena Men out of business.

Regardless of the years of custom to back this tradition, it is in the safe interests of both man and beast that a stop should be put to this. Not only does it pose life-threatening risks to the hyena population in Northern Nigeria, it also poses the risks of diseases, injuries, and death to the hyena men, and onlookers who are only as curious as they are mortified.