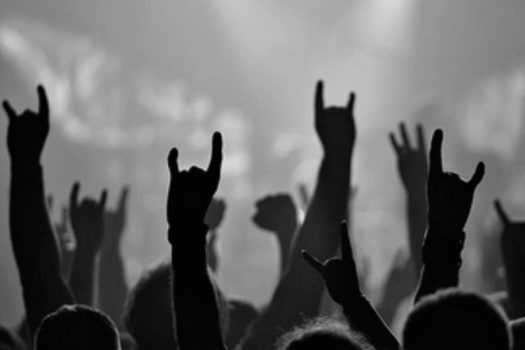 The Evolution, Trajectory And Appreciation Of Rock Music In Nigeria

From colonial times, music has always been an important element in Nigerian society; it radiates in Nigerian life and its diverse cultures. Jazz, highlife, afrobeat, Afropop, juju, and reggae are enjoyed by Nigerians on a global scale. Afrobeats and Afropop currently dominate mainstream Nigerian music.

Rock, metal, and alternative music are not as popular as the other music genres in the country; looking for rock songs in today’s Nigerian music charts can be likened to searching for a grain of rice in beach sand. Over the years, however, the nation’s current younger population is changing the skewed narrative that “rock is only for white people or people who live abroad”. That being said, Nigerian rock music fans listen mostly to foreign bands more because of the low visibility of Nigerian rock, metal, and alt artists.

How It Was, And What It Looks Like Right Now

Years after the civil war, the rock scene in Nigeria was vibrant in the 70s: bands like The Funkees, The Hykkers, Grotto and The Lijadu Sisters, graced the musical decade with psychedelic rock, funk, and lyrics. In recent times, the rock scene is blooming with young artists like Zainab Sule, XTsamurai, Clay, Nathmac, The Isomers and One Last Autograph, among others.

Clay is a songwriter, singer and one-person band who calls herself  “Nigeria’s Rock Goddess”. She has released covers of popular songs and also delivered amazing singles of her own – “Ogadisinma”, “Anwuli”, “Dancing in the Sun”, The One (featuring Johnny Drille), “Lemanya”, and “DOWN” featuring One Last Autograph. “Ogadisinma” earned Clay a nomination at the Nigerian Music Video Awards (NMVA), and in 2012, she won the award for Best Recording of the Year at the Top Nigerian Music Awards (TNMA).

Heavy metal in Africa is more popular with countries like Kenya, Uganda, Angola, South Africa, and Botswana. Central and West Africa have little to no documented heavy metal history. According to AudioInferno, the Nigerian metal scene is not even an infant, it’s more like a foetus. One Last Autograph seems to be the only band in the country that attempts to blend hardcore punk and heavy metal.

Oladayo, a 26-year-old rock fan, says that he started listening to rock and metal at the age of 8, and explains that he loves rock because it sounds different from what everyone considers normal.

“When I got older, I got to understand rock and metal as a genre of music, beyond the melody,” he says.

He adds that as he grew older, he started listening to foreign bands like Linkin Park, Nickelback, and Three Days Grace. According to him, he creates rock, metal, and alt music playlists which he enjoys playing during chores. Oladayo considers rock music to be blissful because of the reverberating sound, the “noise”, the passion from lead singers, the storylines in the music videos, and overall, the difference in sound.

“There’s a song for every mood even when I’m reading,” he says.

For Luther, 28, who got drawn to rock music after hearing his brother listen to Bowling For Soup and Paramore, rock is what keeps him happy and calm.

“Although rock bands are not as popular as they were when I was growing up, I still think it’s a great genre,” explains Luther.

Mackenzie, a 21-year-old student who was introduced to foreign rock artists like Evanescence, Pink and Avril Lavigne by family members, reveals that she enjoys listening to Clay.

“Clay has a very beautiful voice, I love how her voice mixes with the tune of her music, it’s amazing”, she says.

For Oladayo and Mackenzie, they hate the fact that while most of their friends enjoy rock and metal just like them, the genre is largely unsung in Nigeria: they cannot play rock music in public places or out loud in their neighbourhood.

For most younger Nigerians, their introduction to a rock and metal community usually happens through joining WhatsApp groups and attending rock concerts. WhatsApp groups like Rock Republic, Rockaz World, and Rock Haven are fun online platforms and communities where new songs, bands, artistes, playlists and events are discussed and discovered amongst different Nigerian rock fans. Rock events/festivals like Metal and Romance as well as Rocktober Fest,  held in Lagos State, used to be a melting pot for fans of the genre from all over Nigeria.

In her first year of college, Kesiena, 22, felt like an outsider and felt disdain from others when she rocked out to music they could not relate to. She always had a headphone on, stomping her feet, moving her arms and fingers like she was playing an imaginary guitar.

“I felt excluded in group bondings….my music was ‘too much’ for them,” she says.

She adds that she revels in the out-of-body experience that rock music provides, and that she is drawn to artists who highlight social issues in their lyrics.

Around the world, Rock and Metal are often associated with non-conformity, and some people relate both genres to darkness, evil, and Satan. In African society, due to superstitious beliefs, negative stereotypes are attached to anyone  in who dresses in dark gothic clothes that defy the norm. Although not everyone who is into rock and metal expresses themselves this way, this stereotype is pervasive.

Mute, 37, whose personal journey to rock music started in 1998 at a friend’s house after hearing The Swingin’ Utters “Five Lessons Learned” on a video game demo, had ‘satanic panic’ that made him avoid the genre until he actively started listening again in the year 2000. The temporary decision to avoid rock music was caused by a Christian book he read that claimed demons could be transferred through secular music, particularly rock and metal music.

“Even now, I’m still wary about black and death metal, I’m not comfortable with the neo-nazi links, racism and satanic imagery\references from some bands,” he says.

According to him, sticking to mainstream rock and metal bands helps him avoid darker themes.

The road to discovering rock and metal music for most Nigerians usually starts with a transition from other genres. Ezra Olubi, 35, defines his appreciation for music as one dependent on the sound makeup by instruments. He previously listened to trailer and orchestra performance music, but when, in 2011,  he was introduced to symphonic metal by a friend, he began his journey of embracing music with lyrics that evoke a sense of realism and a glimpse of utopia.

“There’s an attention that bands pay to the composition of their music that makes it a product of their personalities and craftsmanship,” Olubi says.

He also explains that he used to struggle with the limitations of vibing to the genre with other people: before access to streaming services like Spotify, he had to go out of his way to read up on bands before trying out new music.

“Rock music pumps adrenaline through me,” Naomi, 22, says. She describes rock as a feel-good drug that helps with her anxiety. In her opinion, rock is the music genre that has the best lyrics.

Lolita, 21 shares the same experience and is grateful for the style, expressiveness, and creativity of rock. According to her, the perfect balance between the instruments is pure.

“It helps me express my rage; I can just go crazy at times”, says Lolita.

Janus, 22, wasn’t a fan of rock music until last year when he was introduced to the band Queen. According to him, the solos, live performances and cocaine-like energy of the genre made him wish he was born in the 1970s or 1980s as a member of the band alongside (the late) Freddie Mercury whom he adores. Janus also expressed his admiration for Prince, who he says reminded him of the link between fashion and artistry as evidenced in his lifestyle.

“I enjoy rock music because it makes me feel like a rock star, I fantasize about the 70s-80s rock and metal era,” he says.

Janus argues that there’s a need for more rock and metal acts in Nigeria because of how people react with indifference, surprise, and scorn when he tells them about his music taste.

A sense of community in a country without a vibrant rock scene can play out in the form of meeting someone who shares similar music tastes. This is the story for Israel, 24, who became friends with one of his roommates at school after finding out they loved the same bands.

“It’s very rare to come across someone who likes rock, to be honest,” he says, recalling the moment his then-roommate plugged in his speakers and played the songs he loved. They started talking, and shared songs with each other. For Israel, this memory was amazing because previous reactions he mostly got from others concerning his love for rock were mixed: his mom always likened rock and metal to ‘noise’ and could not understand his love for it. He enjoys music by Fall Out Boy, Imagine Dragons, Yungblud, Ac\Dc, and Green Day.

For Ayo, her brother influenced her music and movie taste at 11. As she got older, she didn’t actively seek out other people with similar tastes, but she met a couple of rock fans at the University of Lagos.

“Rock music is just music to me, it helps me zone out and be in my own head,” she says.

While others feel isolated in their surroundings, Emma, 19 acknowledges that although their music taste is different from the majority, this setting makes them feel authentic. For them, rock has become a proud part of who they are as a person, providing self-awareness and self-acceptance\love. As a queer nonbinary person, a lot of the music they listen to intersects with their identity, especially songs that dwell on themes of being an outsider.

“At the end of the day, music is a form of expression in itself,” says Emma.

A black woman, Sister Rosetta Tharpe, influenced early global rock n’ roll, and was one of the first popular artists to use heavy distortion on an electric guitar. Tope, 21, hopes that the world will always remember the singer, songwriter, guitarist and recording artist who is usually referred to as the godmother of rock-and-roll.

“I feel proud because it simply confirms that black people have always set the standards,” she says.

It is very easy to assume that genres like rock and metal are made by and for white people when black rockstars and fans are not represented or visible in the rock and metal space. Both genres are male-dominated and there is still little representation of women. Tope recalls being treated condescendingly by fellow male rock fans who doubt her fandom, and argues that even black people are treated the same way in predominantly white spaces.

“I once saw a tweet where a white man said black people cannot understand rock music and stuff….he eventually deleted it,” she recalls.

She further explains that for women, especially black women who find themselves in rock spaces, exclusivity threatens their interest in those spaces.

From rocking out and finding warmth in lyrics, to feeling a sense of identity and community, the rock and metal scene in Nigeria is looking to find its way into mainstream discourse, slowly, but eventually.