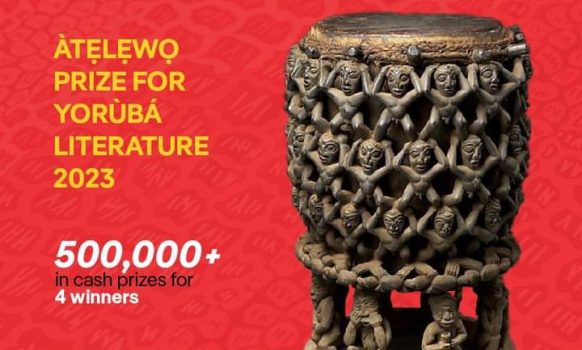 The prize is open to previously unpublished writers working in the Yorùba ́language.

The Àtẹ́lẹwọ́ Prize For Yorùbá Literature announces the launch of its 3rd edition. It is calling on previously unpublished writers working in the Yorùbá language to put in their works. They will be accepting submissions from the 1st of June to the 30th of October, 2022.

The judging process will commence on the 1st of November to the 30th of January, while the award ceremony will hold in Ibadan on the 21st of February, 2023 in commemoration of the International Mother Language Day.

With the support of its stakeholders, the cash prize has increased, and the overall winner will be going home with 250,000 naira, and their book will be published in hard copies. Three other winners will go home with 100,000 naira each.

In line with the goals and objectives of Àtẹlẹwọ́́, the competition is open to previously unpublished writers working in the Yorùba ́language.

The Àteĺẹẉ́ó Prizẹ For Yorùbá Literature was instituted to address some of the problems, such as committed publishers, distribution, invested readerships, etc., that creative writing in Yorùbá faces. The prize intends to rejuvenate the more than century-old, vibrant, universally-praised, and unquestionably rich Yorùbá literary culture. 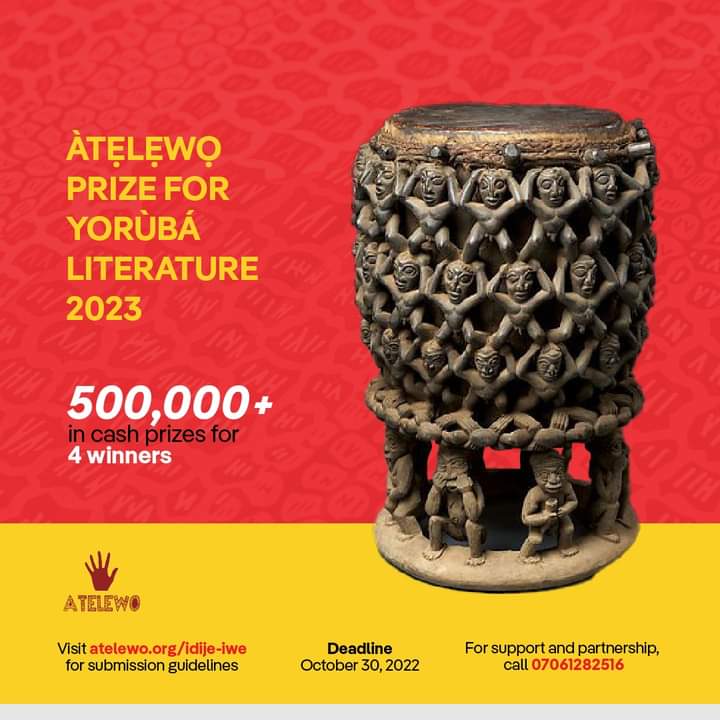 For the second edition, the prize added a new category called “Translation,” for entries that translated works in other languages to the Yorùbá language. At the end of the process, it equally had five winners. Waliyullah Tunde Abiimbola emerged as the overall winner for his manuscript, Oko Ẹranko, a Yorùbá translation of George Orwell’s Animal Farm. Other winners were Kafilah Ayọ̀bámi Fashola (Àbẹ̀ní), Bákárè Wahab Táíwò (Atewolara Akewi-Akowe), Anífowóṣe Zainab Olúwafúnmilọ́lá (Igbeyin Owuro), and Abdulkareem Jeleel Ọlasunkanmi (Ewì Kòbọmọjẹ́). The overall winner received a cash prize of 100,000 naira, while the rest of the winners received a plaque and 50,000 naira each.

More information on the 2023 prize can be found here.

The Àtẹ́lẹwọ́ Prize For Yorùbá Literature