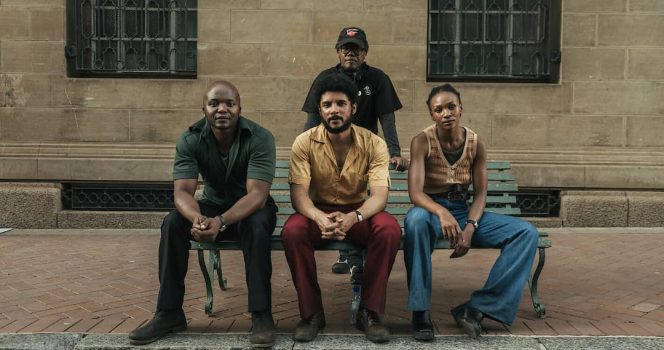 “Silverton Siege” Review: Is this Film about the Silverton Trio? Not Really

Creative liberties had to be taken. But the screenplay could have kept closer to the facts as they are known, and used its creative license to create more compelling characters and explore the complexities of race relations…

On the 25th of January, 1980, in apartheid South Africa, three armed anti-apartheid freedom fighters, allegedly on their way to a planned sabotage mission, escaped into a bank in Silverton, Pretoria when they realised that they were being tailed by the police. Their names were Stephen Mafoko, Humphrey Makhubo, and Wilfred Madela. The trio held 25 civilians hostage as they negotiated several demands, including the release of Nelson Mandela from prison.

The police eventually stormed the bank and killed the three men, with two hostages dying in the shootout.

This is the story of the Silverton Siege, as recorded by South Africa History Online. It is also the story that inspires the Netflix film of the same title, directed by Mandla Walter Dube of the Kalushi fame, and released on 27th of April, 2022, Freedom Day in South Africa. Dube co-produced Silverton Siege with Walter Stephen Ayres from a screenplay by Sabelo Mgidi.

The names of the Silverton trio have been changed in the movie, one of several curious creative decisions. Another curious change is that the three male comrades are now two men and a particularly ass-kicking woman. Dube reunites with Thabo Rametsi, who played the lead character in Kalushi and became the first South African to play an anti-apartheid South African hero. Here, Rametsi leads the trio as the controlled, visionary Calvin Khumalo, supported by Noxolo Dlamini as the tough but grieving Mbali Terra Mabunda (the female freedom fighter whom we love to watch but really do not need in this movie), and Stefan Erasmus as the shaky Aldo Erasmus.

The trio are on their way to a sabotage mission when Calvin notices that they’re being watched by the police. They immediately take off and are chased after by the police, in a relatively high-octane pursuit involving both cars and feet, until they end up in a bank. With several bank employees and customers as hostages, the trio negotiate their escape with Captain Langerman, played by veteran Arnold Vosloo, while also trying to figure out which one of them sold out their sabotage mission to the police. When it becomes clear that they may never leave the bank alive, the comrades present a more impactful demand: freedom for Nelson Mandela.

Across board, Silverton Siege registers good acting under Dube’s hands. Rametsi finds a balance between exhaustion and optimism, and between leadership and comradeship. The screenplay focuses on Rametsi’s character the most, developing Calvin to a level that is not afforded most of the other characters. Dlamini and Erasmus are almost wasted, but they manage to provide their characters with the much-needed substance and complexity. Vosloo is famous for playing the villain in Hollywood favourites like The Mummy and 24, but his strong portrayal in Silverton Siege makes it impossible to categorise the character of Langerman as a villain. As a police officer participating in and benefitting from apartheid, it might seem clear as day that he is as much a villain as the system is. But even at the very end of the film, it is still unclear whether or not Captain Langerman can be trusted. He just always seems genuinely good.

In fact, there is something uneasy about the portrayal of the major white characters, and it is almost as if the movie is going out of its way to present its message in a manner that is more palatable to its white audience. For every racist or otherwise problematic white person, there is a good white person who works very hard to counteract that image; there’s the good white police captain who’s just doing his job in the kindest way available to him but whose hands are tied by the powers that be, the selfless white bank supervisor who puts everyone else before herself even though her strange but privileged status as the Justice Minister’s daughter makes her protection a priority for the police, and the white priest who volunteers to take the place of a black hostage and is happy to have a gun held to his head if it’ll make his black freedom-fighting captors feel more comfortable.

For the black people, the picture painted is less patronising. We root for the freedom-fighting trio mostly because we are supposed to, even though the film doesn’t pay enough attention to the complexities of the said freedom fighters. But between the woman with albinism who is passing as white, the African American whose “Americanness” allows him to stand on the whites-only queue, the black pilot sent in by the police as an insider, and a white woman’s black nanny, every other black person of note, including one member of the trio (in yet another strange application of artistic licence), is trying to not identify as a black South African, or is betraying their fellow black people, or is just there to prove a point about a white person’s goodness.

The truth is that there isn’t much that is known about what really happened in that bank during the real stand-off. Creative liberties had to be taken. But the screenplay could have kept closer to the facts as they are known, and used its creative license to create more compelling characters and explore the complexities of race relations (including the issues of passing as white and the better treatment of non-South African black people) with more depth than it was able to. That might have made for a more interesting and even unusual thriller. 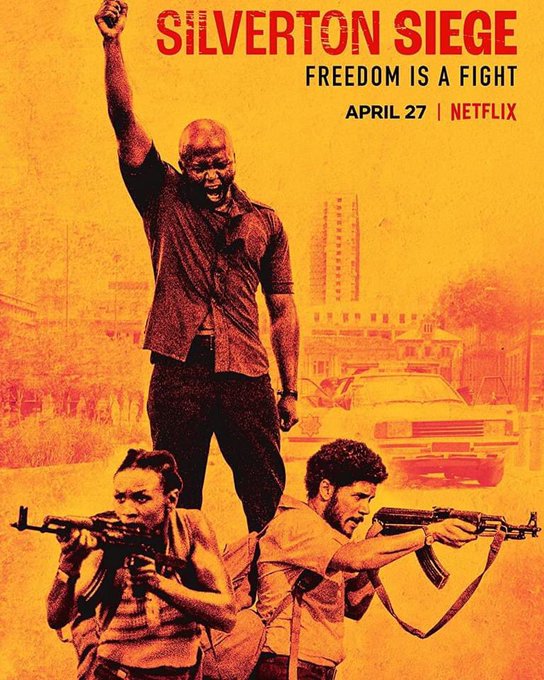 The movie does work as an action thriller. It is interesting and tense enough, with decent stakes for a hostage movie, especially with high-risk hostages like a pregnant woman, a minister’s daughter, and an American citizen. But the fact that the film is principally inspired by a real event that had a huge impact on the anti-apartheid struggle and the Free Mandela Movement gives it a more intense vision and higher stakes than would be characteristic of the average action thriller. Unfortunately, despite the cast’s best efforts, the stakes never really feel higher than a regular hostage situation movie, not even when Calvin sets money ablaze in the full glare of the public and raises the “Free Mandela!” chant.

Silverton Siege declares that freedom costs too much, that it costs everything. It does portray that cost to an extent, highlighting racial pressure points in the process. But it does not dedicate enough time, space and effort to the people for whom freedom really cost everything, ultimately wasting a huge opportunity to tell the remarkable story of the real Silverton trio. Even the Judas subplot and how the said subplot affects the eventual tragedies feels like a betrayal of the trio in the name of artistic licence. The Silverton Siege, itself, turns out to be little more than just a backdrop against which other agendas are set.

Still, once one is able to look past the historical significance of the movie, and if one is willing to ignore all that pandering, Silverton Siege does a decent job as a hostage movie. But it does not quite land as a historical drama.