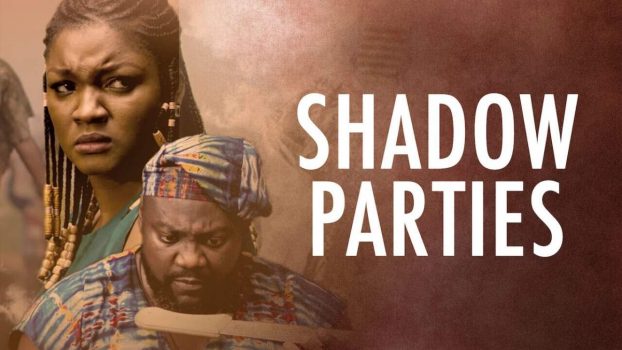 “Shadow Parties” Jumps Too Many Steps in the Wrong Directions

Dr. Ian Stones says in the film that, “The road to hell is paved with good intentions.” Sadly, all the good intentions that exists could not save this chaotic movie.

An important message alone cannot save a film, much less an important message that is poorly developed. But a good plot, a solid cast, good directing or even decent cinematography might cushion the damage. Unfortunately, that is not the case with director Yemi Amodu’s 2020 socio-political drama. “Shadow Parties” boasts of laudable intentions, but it ends up as a thoroughly bad project.

The film follows a clash between the two fictional communities of Aje and Iludun in which not even children are spared from the massacre. As the violence unfolds, lovers lose their significant others, innocent people lose their families, and lineages face extermination. But while the warriors on one side fight to claim what they believe to be their land, and the warriors on the other side fight for their liberation, questions begin to arise as to who the ultimate beneficiaries of the war are. As Sobowale’s character, Amoke, puts it: “When there is communal war… this long, there is always possibility of shadow parties.”

The only thing that works for “Shadow Parties,” even if remotely, is its championing of love and unity in a divisive world. Its story, underlined by this timely and ever relevant message, could have been the foundation for an impactful and monumental piece of art. But with poor development, empty characterisation and a shabby resolution, this film never stood a chance. In fact, nothing about the film is well thought out. Between terrible effects that we thought Nollywood had left behind, cringe-worthy performances, and moments of silly humour—especially in Saka’s appearances—a film that should be tragic and heart-breaking ends up feeling like a cycle of bad comedy skits. Only a handful of scenes arouse any real sympathy, with Abraham at the centre of the most emotional one.

The acting is no better. Amateurish acting is a predominant Nollywood staple, and “Shadow Parties” is no different. It becomes worse since this jinx spreads to the established actors, too. It is even worse, especially since it has to rely on too many extras and minor characters to tell its story. The director should have paid special attention to this, but there is no evidence that he put in any effort. Children smile in reaction to violence. Romance scenes are unnaturally childish and excessively cheesy. Overall, the film feels like a stage play, and one cannot help but think that this movie was a waste of our best talents like Sobowale, Kosoko and, Arinze, and Jalade-Ekeinde.

Before its release, Jalade-Ekeinde was announced as the lead actress in the film. In reality, however, the film cannot be said to have a lead. Characters pop up out of nowhere but are treated as if they have been part of the story the entire time. Similarly, incidents occur randomly and leave you wondering what you missed before that. The scenes are so out of balance that it seems like the soundman is unsure what volume to work with. Props from older decades surround characters who are clearly modern. And despite the beautiful scenery, the poor cinematography takes away from the film’s credibility.

Casting choices are very questionable. Abraham and Blaq are unconvincing as siblings with a shared background because of the stark difference in their speech, accents and mannerisms. An excuse can be made that they were casted for their acting prowess, but when you consider the choice in casting the children who play the younger versions of Abraham and Blaq’s characters, that excuse fails. It is frustrating how many Nollywood movies ignore complexion in casting dark-skinned children as the younger versions of light-skinned people and with no motivation to help us believe there was any altering of their complexion.

“Shadow Parties” manages to fail at everything. Perhaps in an effort to capture the interest of global audiences, the movie uses many unnecessary languages such as Hausa, Igbo, Spanish, and others. English is however predominant. Sadly, English words sound forced in the mouths of many of the actors. This points to the film’s, perhaps, unintentional desperation to appeal to a foreign audience by trying too hard to be both local as well as global. It is no surprise, then, that the film would cast a white woman, Korpaz, who defies her tribalist Nigerian husband by helping child-victims from the enemy community, as well as Morgan, a white saviour, who sets out to talk the warring communities into peace with little to no knowledge about their history.

Only the patient can sit through the two hours that “Shadow Parties” runs into. By the last act, when the shadow parties are revealed, you are too drained to be surprised. There is nothing to be surprised about, anyway, as the revelation comes too late to make any impact. The white characters could not save this film any more than they could save the events in it. Morgan says in the film that, “The road to hell is paved with good intentions.” Sadly, all the good intentions that exists could not save this chaotic movie.