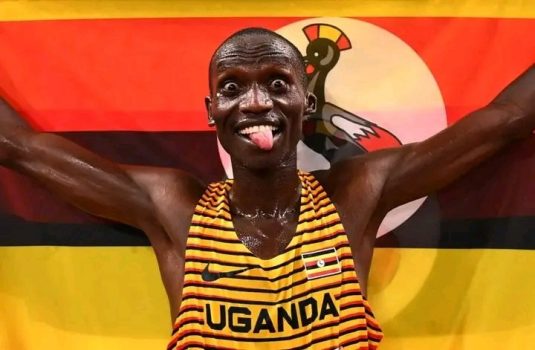 Countries such as Nigeria which for years have lagged behind in sporting victories couldn’t be more proud of the world record broken by Tobi Amusan. For these four countries, nine athletes pushed their countries to victory…

To varying degrees, the mediocrity that once plagued sports in Africa is beginning to wear off. The victories won by African countries in the just-concluded 2022 World Athletics Championship are not achievements that can be easily washed off. The continent made visible efforts that paid off, and that’s something to bask in. Having Ethiopia finish as second taking most of the gold medals in long distance running events, including gold medals in the men’s and women’s marathon is soothing. Although there is a reasonable space between the number of gold medals won by the host country, United States and Ethiopia, coming second doesn’t sound like a bad game. Countries such as Ethiopia, Kenya, Morocco, Nigeria and Uganda showed passion and dedication in the games. These countries were represented by formidable athletes who were out to get the gold. It took years of rigorous training and dedication to climb these heights. Countries such as Nigeria which for years have lagged behind in sporting victories couldn’t be more proud of the world record broken by Tobi Amusan. For these four countries, nine athletes pushed their countries to victory. 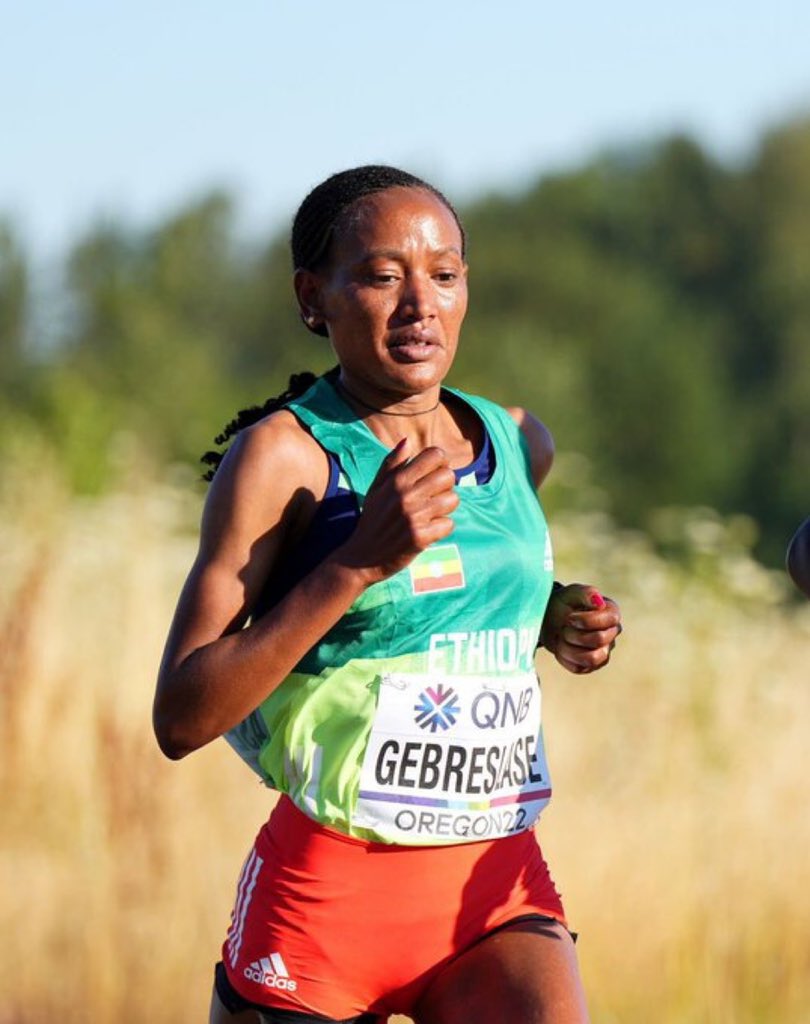 27-year-old Gotytom Gebreslase is an Ethiopian athlete who had a supportive background growing up in her career as an athlete. Being farmers, it was fascinating how her parents had unwavering interest in sporting activities. They would always listen to Ethiopia’s athletic performances on the radio. This interest demonstrated by her parents fueled her passion in becoming an athlete. Gebreslase kept training as a young girl in school till when she was selected to join the Mesfin Industrial team. She seized the opportunity and joined the team. Her journey as an athlete started with that singular call, and she made her first sporting travel to Addis Ababa in 2011 for a competition where she was selected for the junior national team. It was at this point she noticed her spark for track games.

There is no doubt that Gebreslase has long been persistent in training. Looking at her past victories, it is obvious that this year’s victory was inevitable. Before surging ahead to the win in the women’s marathon at the world championship in July 2022, Gebreslase steadily ran behind her rival until late in the race. She finished the fast and flat course in a championship-record time of 2:18.11, securing a gold medal in the game 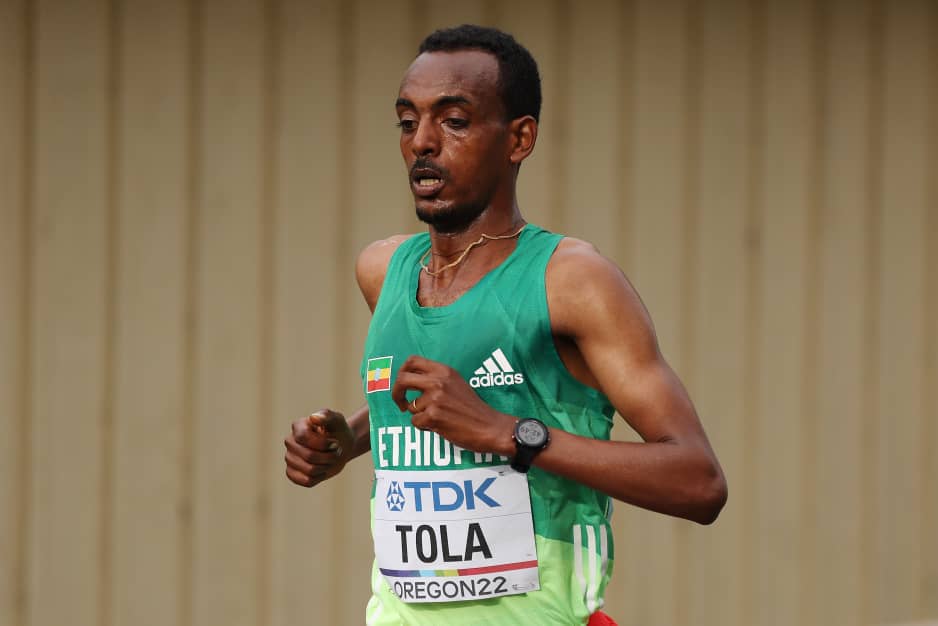 The 30-year-old Tamirat Tola whose nationality and ethnicity stirs some sort of confusion in the minds of people due to his name, is an Ethiopian long-distance runner that has successfully represented Ethiopia in several competitions. In the just-concluded World Athletics Championship, Abera broke the world record of becoming the first athlete the history of the events to complete the 42,195 km in 2:05.36 seconds.  The performance earned him and Ethiopia the goal medal.

In 2013, Abera made his first marathon debut in Agadir, and afterwards appeared in several sporting activities, within and outside Ethiopia. Abera won the Ethiopian national title in Cross Country in 2015 which consequently led to his selection for the 2015 IAAF World Cross Country Championships. In 2017, he participated in the World Championships held in London, winning the silver in the Marathon, in a 2:09.49 seconds time frame. 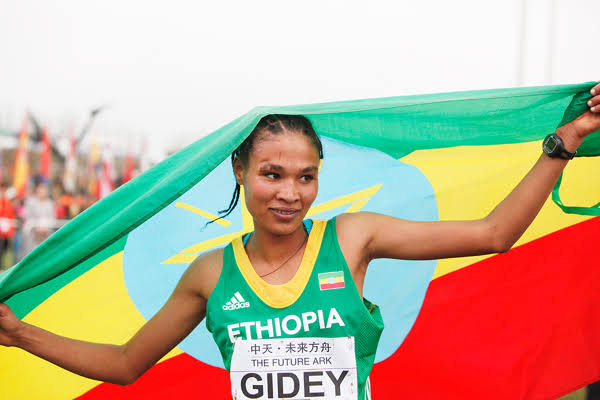 24-year-old Gidey was born in the Tigray region of Ethiopia, where she spent her years training and pursuing her sporting interests. Gidey’s first international impression was made in 2015 when she earned the women’s U20 title at the World Cross Country Championships in Guiyang before keeping the title two years later in Kampala.

In 2019, she won a bronze medal at the World Cross Country Championships before winning silver at the World Championship’s 10,000m hurdles in Doha, a victory that stood as a major breakthrough in her journey as an athlete. In 2020, Letesenbet broke another world record in her career by winning the women’s 5000m by more than four and a half seconds at the Valencia World Record Day. She did no less in 2021. Gidey added the world 10,000m record to her past victories, recording 29:01.03, and thereby smashing the record of Sifan Hassan in Hengelo, Netherlands. That same year, she claimed a 10,000m bronze medal at the Tokyo Olympic Games. 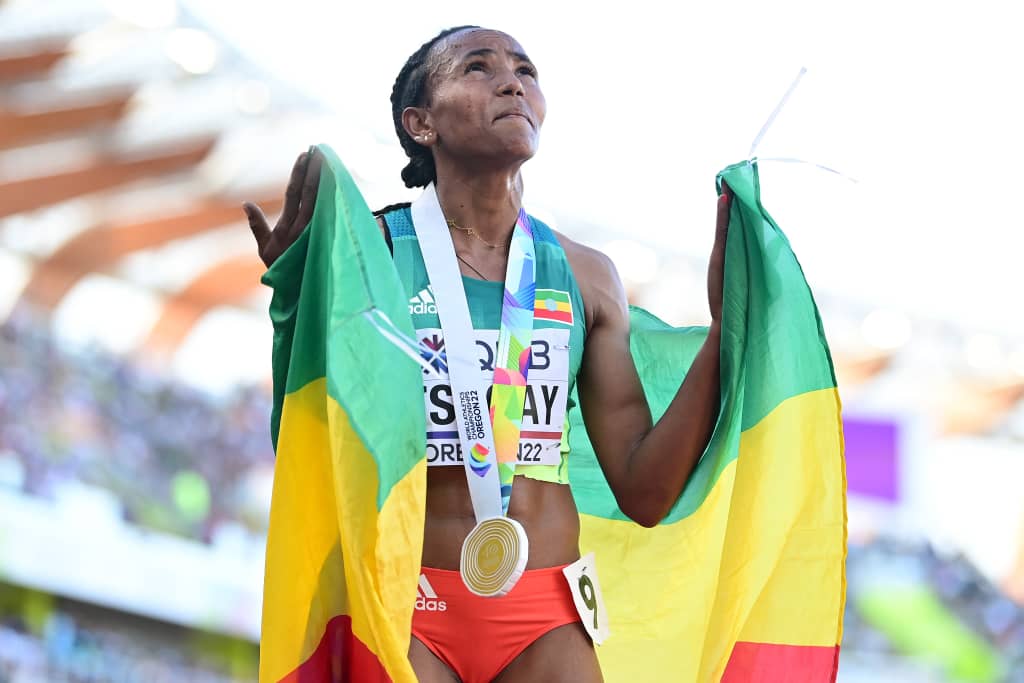 The 25-year-old Ethiopian middle and long-distance runner has consistently competed in different champions. In 2016, Tsegay won bronze in the World Indoor Championship in Portland. In 2019, she also secured bronze in the 1500m race. In 2020, she secured silver in the Olympics Games. In 2022, she also secured silver in the 1500m World Championship, and the recent gold in 5000m in Belgrade in the just-concluded World Athletics Championship. 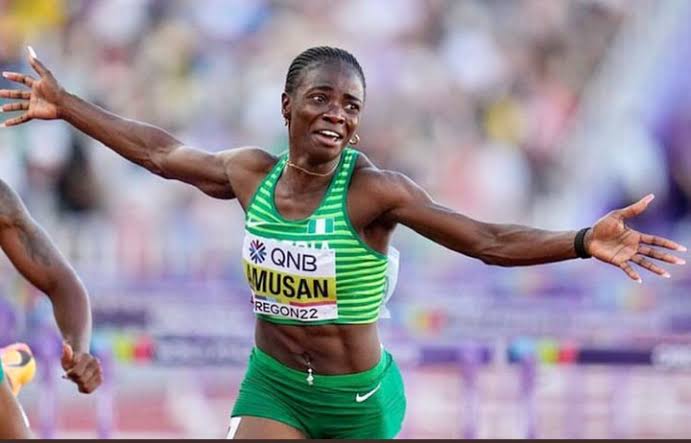 The 25-year-old Nigerian track and field athlete, Tobi Amusan, just broke the world record in the 100m hurdle in the just concluded World Athletics Championship, setting a new world record of 12.12 seconds. Amusan wasn’t always a track athlete. In the early days of Amusan’s career, her parents had definite instructions regarding her study life. For Amusan’s father, her studies were to come first, not sports. Being athletes themselves, her parents knew the disappointments that came with sports, and they didn’t want her to experience what they did.  However, the Ijebu Ode-born athlete never allowed the strict rules from her parents deter her from pursuing her interest in sports.

Amusan went through rigorous training with coaches such as Solomon Aliyu and Ayodele Solaja. Her journey to breaking records was, hence, steady, intentional and progressive. Notably, this gold medal isn’t the first Amusan has won in her journey as an athlete. In 2018, she became the Commonwealth Champion in the 100m hurdles, taking the gold medal home. The following year, she came in fourth place at the World Championship in Doha and also at the Olympics in Tokyo in 2021. Also in 2021, she became the first Nigerian to win a Diamond League in Zurich in the 100m hurdles and breaking the then African record held by Glory Alozie. 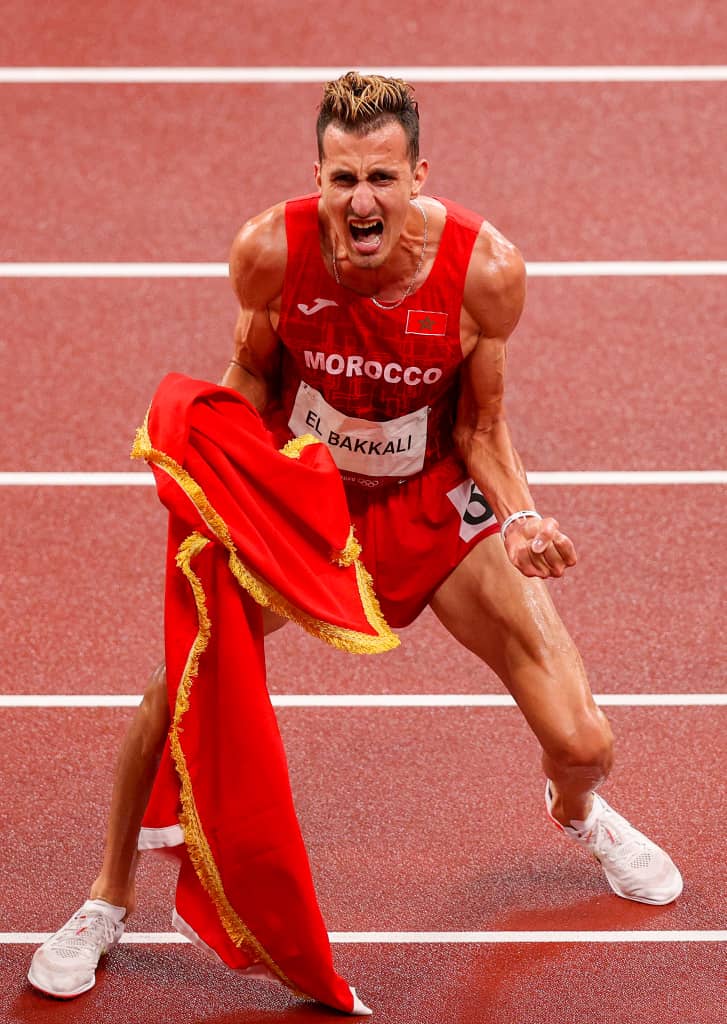 History was made as Tokyo Olympics champion, El Bakkali, became the first Moroccan to ever win the men’s 3000 steeplechase in the World Athletics Championships. El Bakkali was pronounced winner with a record time of 8:25.13 seconds.

The 24-year-old has represented Morocco in several games ever since he was identified. In 2016, he represented Morocco in the summer Olympics, and took silver in 2017 in the 3000 meters in London. He also took a bronze in 3000 meters in Doha in 2019. At the peak of his career, El Bakkali gained the Tokyo championship title when he took the gold medal for the summer Olympics in 2020. 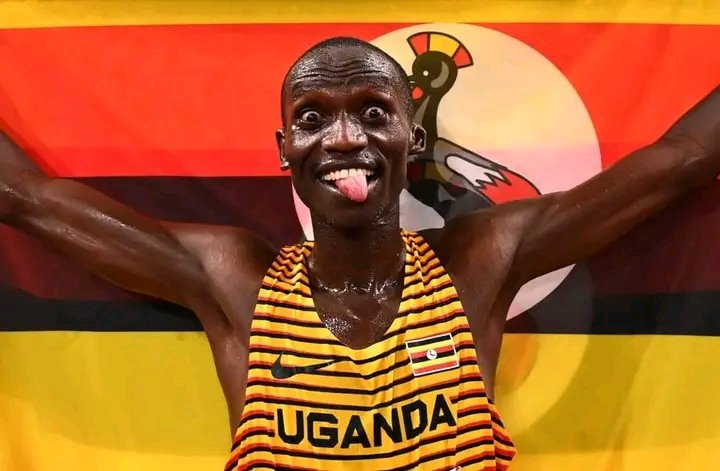 Achieving a second world title, Ugandan Joshua Cheptegei secured the gold medal in the 10,000m in the World Athletics Championships. Cheptegei already added two gold medals to his collection when he won the 5000m and 10,000m at the 2018 Commonwealth Games.

It won’t be extreme to regard Cheptegei as masterly in field and track games as he has, since his recognition, secured about seven gold medals. After he made his grand debut in 2014, he won his first gold for 10,000m in the World Junior Championships. He also won two gold medals at the Commonwealth Games in 2018. In 2019, he won two gold medals at the Cross Country Championship in Aarhus. Adding to the successes, he secured a gold medal in the Olympic games of 2020. 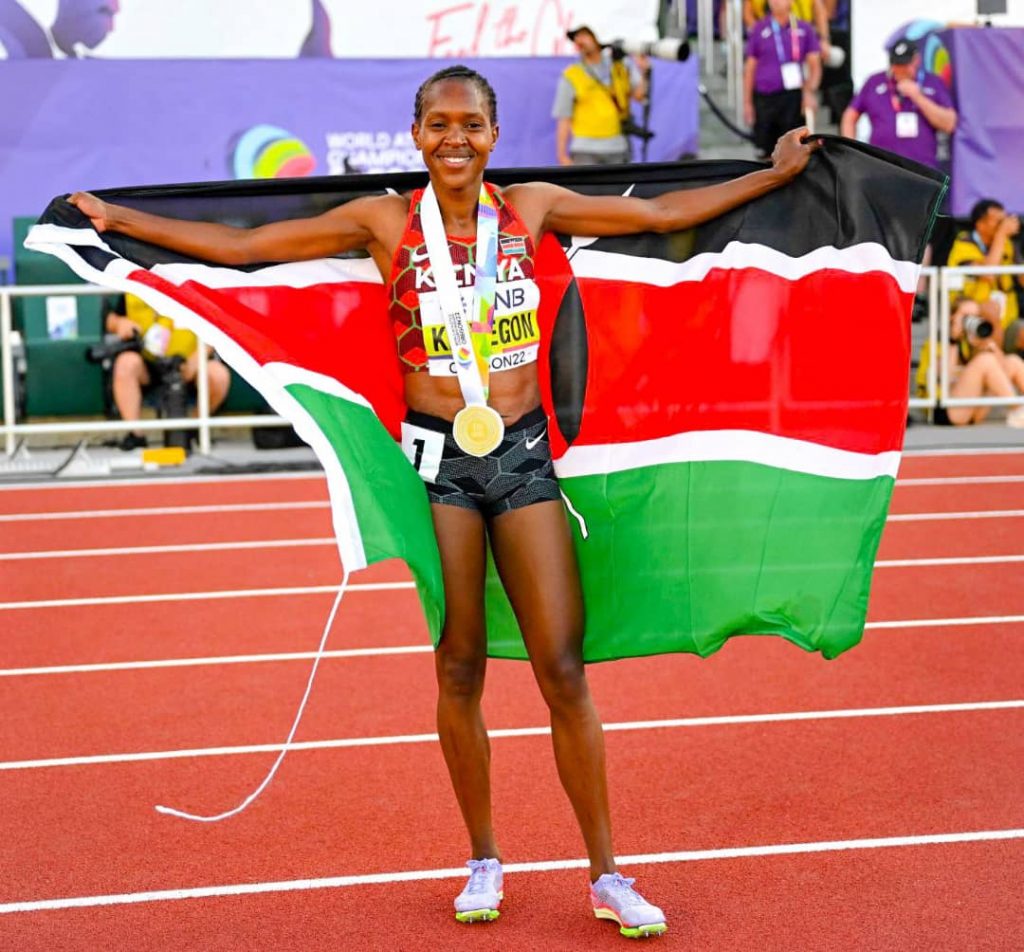 Faith Chepngetic Kipyegon is a 28-year-old Kenyan middle-distance runner who has many gold and silver medals to her name. Kipyegon has either won first or come second place in all the major championships she has competed since her debut.

In 2015, she won a silver medal at the World Athletics Championships, and gold in 2017 after which she was recognised as one of the top 100 most influential Africans by African News. Kipyegon secured a silver medal in 2019, barely a year after having a child. This marks on her passion and dexterity.

Fast forward to 2022, Kipyegon performed excellently at the World Athletics Championship. With a past well furnished with victories, taking the gold home was a big possibility. Kipyegon is married to middle-distance runner and 2012 Olympic 800m bronze medalist, Timothy Kitum. They have a daughter. 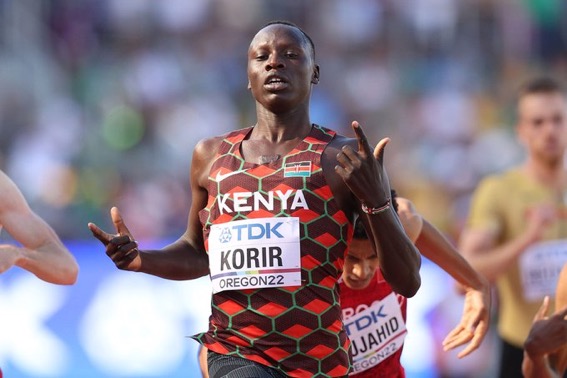