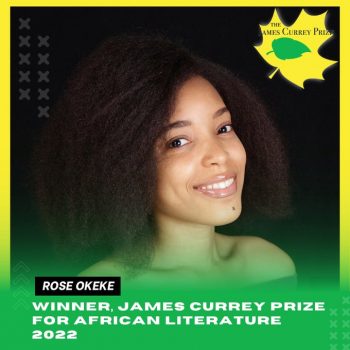 Nigerian writer, Rose Okeke, has been announced winner of the second edition of the James Currey Prize for Literature. She wins the £1000 award for her novel, Child of the Corn.

The James Currey Prize for Literature is an annual prize which aims to reward the best unpublished work of African fiction written in English. The award which kicked off in 2021 is given in honour of the acclaimed writer and editor, James Currey. The award was founded by Nigerian writer, Onyeka Nwelue.

The announcement of the prize was made on the final day of the James Currey Festival which was held on the 3rd of September in London at the University of Oxford.

Obi, in his celebration of the winning story noted that, “Rose Okeke’s ‘Child of the Corn’ tells the story of Africa beautifully in terms of the fetish inclination and beliefs. It is also interesting to see the tension in the relationship between Simi and her mother expressed clearly through the narrative, a beautiful reimagination of history.”