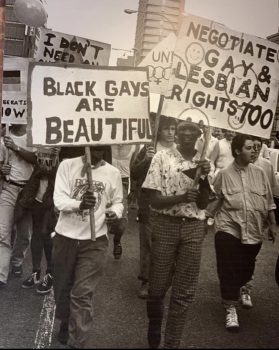 Pride Month 2021: Dangerous Myths About LGBTQ+ People In Nigeria That Should Be Left Behind

Nigeria as a country criminalizes the existence and rights of its LGBTQ+ citizens with federal laws like the Same-Sex Marriage Prohibition Act (SSMPA) and sharia laws in the north. The overall social attitude towards queer persons by other cis-heterosexual Nigerians is negative. In a 2019 social perception survey by The Initiative for Equal Rights (TIERS), it was found that 60% of Nigerians will not accept an LGBTQ+ family member while laws like the SSMPA are supported by 75% of the population.

This negative sentiment towards the existence of queer individuals is accompanied by anti-gay myths and misconceptions of  LGBTQ+ identities which fuels ignorance in cis heterosexual citizens. These myths also contribute to physical, sexual, and psychological harm and violence that queer people in the country are subjected to by the Nigerian state and other members of its society.

Additionally, this education should be accompanied by getting information about various debunked harmful queerphobic myths, so that these myths and sentiments are not continuously reproduced.

Most homophobic Nigerians, especially clergymen and other religiously inclined individuals, enjoy pushing the narrative that people become gay or queer as a result of childhood trauma or sexual abuse by an older person of the same gender.  Parents of queer children often find themselves panicking because of this myth and assume they failed to protect their children from harm.

According to 1in6, a nonprofit organization that provides support for male survivors of sexual abuse and assault, “Boys can be sexually abused by both straight and gay men and women. Sexual abuse is the result of abusive behavior that takes advantage of a child’s vulnerability and is in no way related to the sexual orientation of the abusive person.”

This also applies to both straight and queer women.

Conservative Nigerians use this myth as a defense for why they do not support LGBT rights. They see the increase in queer visibility in the country as an influence from the west and a tool of western imperialism.

However anti-gay and anti-sodomy laws in Africa were imposed on the continent by European colonialists: our extant laws are derivatives of British legislation. Before colonialism, diverse sexual and gender identities were not alien to African societies: there were practices like Female Husbandry in Angola, worshipping of androgynous goddesses with penises in Egypt, wearing of clothes that were not gendered, and names for queer people in uncolonized language i.e “dan Dauda” in Hausa vocabulary which means “men who are like women”.

One can conclude that rather, it was homophobia and not queerness that was imported from the west.

Just like myth 1, this myth assumes that sexual orientation determines the actions of an abuser. This is not true.

Anyone who abuses a child can be straight or queer. Abuse is about control and power, not sexual attraction. Children do not have the (legal) ability to consent to any sexual activity. Sexual abuse has nothing to do with the perpetrator’s and victim’s sexual orientation.

The LGBTQ+ community in Nigeria and worldwide has never voiced support for grooming, child abuse, or rape. In Nigeria, sexual violence is a pandemic, and the largest perpetrators are men who do not identify as queer.

Myth 4: Being queer is a choice

“As a cis-heterosexual person, at what point did you choose to be cishet?”

It may seem like a weird question, but queer people are always asked something similar. This mentality is a consequence of considering heterosexuality as the default sexual orientation, and therefore assuming that other minoritized identities arise from personal choice or other factors like the myths listed above. This myth harms queer people in Nigeria in numerous ways: parents and guardians who believe this misconception force their queer children to undergo “conversion therapy”, which can cause psychological trauma to said children. Furthermore, queer women are threatened with corrective rape and other forms of sexual violence by men.

People do not “choose” to be queer, they are queer.

Myth 5: Queer Nigerians can just live their life, other people do not care that much

This myth is used as a major gaslighting tool because if Nigerians did not mind queer people at all we will not have laws like the SSMPA and sharia laws that persecute queer people for simply existing.

There is real-time news of queer people being violated and losing their lives to violence and bigotry. The federal law against same-sex marriage (SSMPA) also punishes people who organize support for LGBTQ+ rights and activism.

(Many) Nigerians who are majorly conservative support the status quo. Queer people cannot “just live their life” in a country that criminalizes that life.

Myth 6: LGBTQ+ people in Nigeria are confused and unserious

When people utter myths like this, it reminds us that they see queer identity as a joke or something unreal. Queer people exist and are as real as you are.

Additionally, it is a very harmful and dangerous myth considering the fact that no one will just want to hop on a “queer trend” in a society where that “trend” can cost them their life.

Queerness is not confusion, it is human existence.

Myth 7: Trans and nonbinary Nigerians are not part of the LGBTQ+ community:

Defying the heavy dualistic structure of the gender binary in our society, trans, nonbinary and gender-nonconforming individuals have always existed in Nigeria and within the LGBTQ+ community.  Even though cross-dressing is not synonymous with trans identity, transgender Nigerians are commonly considered and called crossdressers.

Sadly, laws like Section 405 (2)(e) of the Penal Code (Northern States) Federal Provisions Acts considers anyone who ‘cross dresses’ to be a vagabond. Section 9 of the Kano Law punishes them with an imprisonment term of one year and a 10,000 naira ($26.31) fine.

Laws that criminalize freedom of expression and resistance to the norm are cruel and anti-human.

Myth 8: LGBTQ+ children do not exist

Parents of queer children panic when they find out their kids are not cishet. Some parents even prevent their children from going to same-gender schools, force them to participate in compulsory cis-heterosexuality, reject or abuse them and make them undergo conversion therapy which is damaging to a child’s psychological performance.

Children can be open and have appropriate knowledge of sex and sexual orientation. This is not damaging as extensive sex education is vital in every child’s life. There are queer children and there are nonqueer children. Society has to become more accepting and respecting of children with lgbtq+ identities because just like other cishet children, they will always exist.

Families are diverse: there are single parents, same-gender parents, opposite-gender parents, adoptive parents. Whatever way, shape, and size a family looks like is none of our business. The ability to have children should not be a factor to determine why any human being is allowed to love, partner and create a family. There are straight couples who do not have children, do not want to, or cannot.

Also, LGBTQ+ people have the ability to reproduce, not just bisexual and pansexual, but gay, lesbian, trans and asexual couples can have children in so many ways.

Not only is this sentiment ridiculous, but it is also untrue. Queer Nigerians do not exist to erase or make everyone queer. They exist just like cishet people do.

With the increase in queer visibility in our society especially through the media, there has been a false rhetoric peddled by homophobic Nigerians who believe queer people want to force “their sexuality down their throat”. This is not true, secondly, and this dangerous rhetoric aims to make sure queer people are not recognized as individuals of equal standing in society. Why would you be against the visibility of another human being just because they are regarded as gender minorities?

During the #EndSars protests, one key issue that was expressed by the youths of Nigeria was being profiled by their looks and physical appearance by police officers. When queer Nigerians protested, they agitated on two fronts: freedom from violence by the police and by civilians, because of their appearance.

The stereotype mostly attached to queerness in Nigeria is being feminine-presenting as a man and masculine-presenting as a woman, or both for nonbinary individuals. This myth and mindset reinforce the same profiling that we all protest against. There is no uniform way to look or be queer. It also harms other cishet people who don’t fit into the norm and are perceived as “queer’ because of how they look.

Queer people cannot be boxed into one expression, and there is no way to tell if someone is queer unless you ask them.

As pride month continues to be celebrated this June and beyond, it’s hoped that in the years to come, the fight for LGBTQ+ rights in Nigeria receives the support that it deserves, and that people who claim to voice support for the community do the actual work in assisting queer Nigerians in dismantling the structural harm of homophobia, along with the harmful myths that accompany anti-queer sentiments.