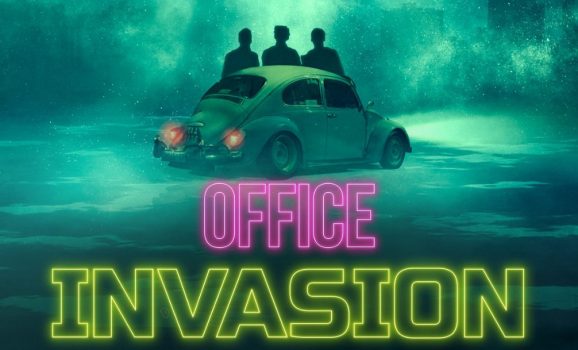 From its opening sequence, Office Invasion opts for the most bizarre choices, moving from ridiculous to disgusting and blatantly gory. And it’s all in good spirit the entire time…

There are a good many workplace comedies about life in the office and horrible bosses (puns very much intended), but Office Invasion is so refreshingly unusual that it feels like a blessing we didn’t know we needed. Its best quality is how it pulls together the widely different genres of comedy and science fiction in telling its very wild story without coming off as clumsy. For good measure, writer-director Gareth Crocker, who co-directs with Fred Wolmarans, throws in an attempted heist, an action sequence of sorts and some romance. And they all blend in quite impressively.

Office Invasion follows three men who work in different positions at a mining company. Sam (Rea Rangaka) is a geologist who works in management, Prince (Kiroshan Naidoo) works in finance as an accountant, and Junior (Sechaba Ramphele) is a security guard. Theirs is an unlikely friendship, seeing as they ordinarily do not find themselves in the same meetings at the office. But, somehow, they have a very close friendship that’s unaffected by their ranks, eating together during lunch break and hanging out after work. The company they work for is supposed to be doing well since it’s the only company mining the only zulcanoid deposit on earth. In this movie, zulcanoid is as rare and as important as the Marvel Cinematic Universe’s vibranium. It’s liquid metal like mercury, “except it won’t poison you or make you want to eat your own face.” And the demand for the metal is so high that the company can barely meet up. But just as things start to fall into place, the Chief Executive decides to step down to attend to his health, leaving the company in the hands of his ridiculously unfit son, Melusi (Kabomo Vilakazi).

The new boss barely gets comfortable in his seat before he starts to cut costs so he can make the company appear profitable enough to be sold off. Melusi starts to make changes that range from desperate to insane, and the three friends are among the employees who bear the brunt. For people who were already in dire financial situations before Melusi’s ascension to the throne, it’s a major trigger when one of them gets demoted, one gets fired, and one gets less work time and consequently less pay. The trio decide to seize control of their situation by taking drastic — criminal — measures. But things get really weird, and instead of saving their pockets, they have to save the company from human-eating aliens instead.

Obviously, the part about the aliens is the hook. It’s even the bit that made it to the official synopsis for the movie. But it takes a very long time for the plot to get there. The movie is already far spent by the time we see any real action, and other than the catchy sequence before the title card, it takes over an hour before the alien bit really kicks in. The bulk of the time is spent showing us the characters and where they are in their lives with each downward milestone that the company attains. Sam is a family man with an ailing daughter who relies on the health benefits that the company is taking away. Prince hates his job but needs it desperately because his trust fund depends on it. Junior desperately needs to lease a new home and get away from his roommates who might very well sell off everything in the house. Crocker takes his time to establish his characters in a manner that demands emotional response, and it really slows down the movie. But I very much appreciate how he introduces us to them. It’s been a while since I was this emotionally invested in characters in a comedy film, and it certainly helps that Crocker puts us in their heads a lot. Prince, especially, has a very vivid imagination that accounts for the heaviest emotional moments and at least half of the gore peppered across the movie. Maybe that’s what makes his character a potential favourite, coupled with Naidoo’s enchanting performance in that role.

Interestingly, as much as the film is a comedy, the actors don’t take their roles for granted. Naidoo and Ramphele deliver strong portrayals individually, but together, it’s a delight to watch their energies bounce off each other. Rangaka’s role as the focused leader — even if Sam claims that they have no leader — keeps him from being as fun as the other leads. But he definitely holds his own, especially in the way he helps keep the film grounded. The entire cast actually put in good shifts. It’s an all-round dedicated movie, really. And if there was ever an appropriate amount of excitement to indulge in when one tries something different, the Office Invasion cast and crew clearly have that amount, at least.

From its opening sequence, Office Invasion opts for the most bizarre choices, moving from ridiculous to disgusting and blatantly gory. And it’s all in good spirit the entire time. You can almost feel the excitement with which Crocker and Wolmarans pour out all the gore that we witness in the movie. Even in the comedy, there’s an overindulgence such that jokes are stretched out beyond the landing as Crocker tries to milk them for all they are worth, drowning out the humour on several occasions. 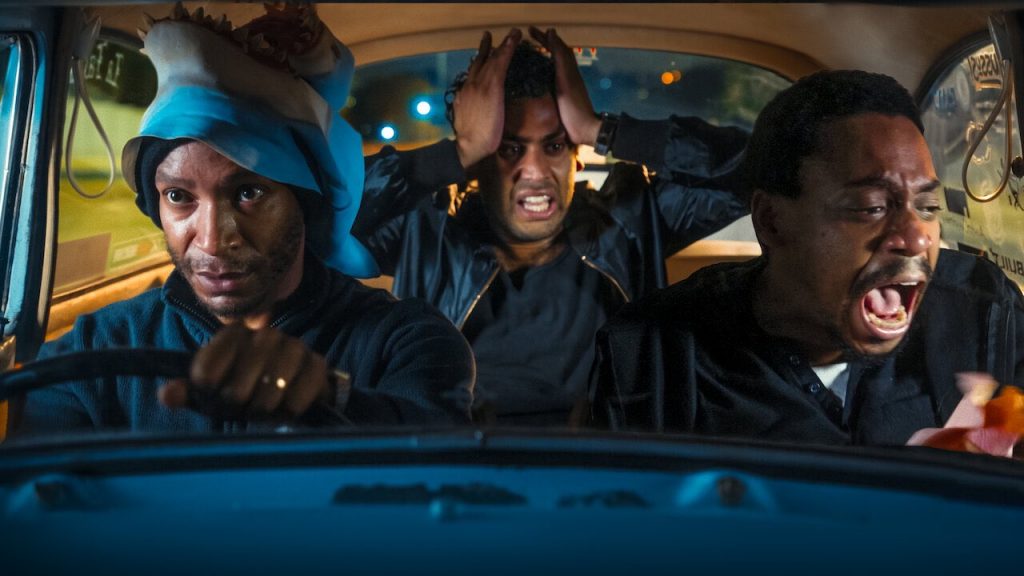 Still, this is a very hilarious and delightful movie with an undeniable commitment to its cause, which, from all indication, is to get audiences simultaneously amused and excited. It’s not looking to make any profound statements about the corporate world, and it doesn’t need to. It also doesn’t scream South Africa in the ways that many might expect it to, and it could easily be a Hollywood movie if the characters had American accents — it even borrows Hollywood’s special talent for endowing villains with foreign accents — but that’s okay, too. It has an original story and, I dare say, it’s one of the most unique films I’ve seen this year. I imagine it was an entertaining film to make. It’s definitely entertaining to watch. More of this craziness, please!

Vivian Nneka Nwajiaku, a film critic, writer and lawyer, writes from Lagos. Connect with her on Twitter @Nneka_Viv and Instagram @_vivian.nneka.