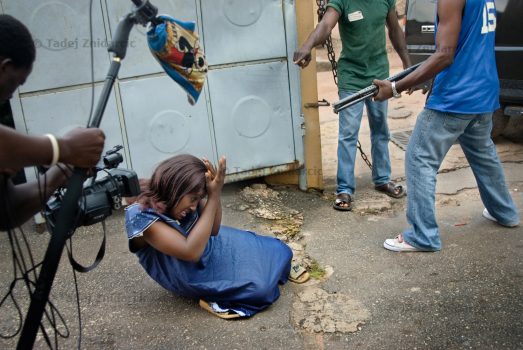 Nollywood Scripts Are Really Problematic – But Aren’t They True To Life?

If you watch as many Nollywood movies as I do, it’s either you love being immersed in the stories or you’re a Nigerian. I don’t know which is worse – and no, I’m not even exonerating myself.

My attachment to Nollywood is mostly borne out of nostalgia. Nollywood has been fuelling my imagination on how the world works even before I was exposed to the real world. It has influenced my fashion and my writing.

I cannot make excuses for the quality of our movies, but we do tell good stories.

Nollywood tries very hard not to be a monolith, but it’s hard to tell stories that show the way things should be rather than the way Nigerians think they work. Nigerians, as we know, are superstitious and very set in their ways. Like this woman said in this movie: 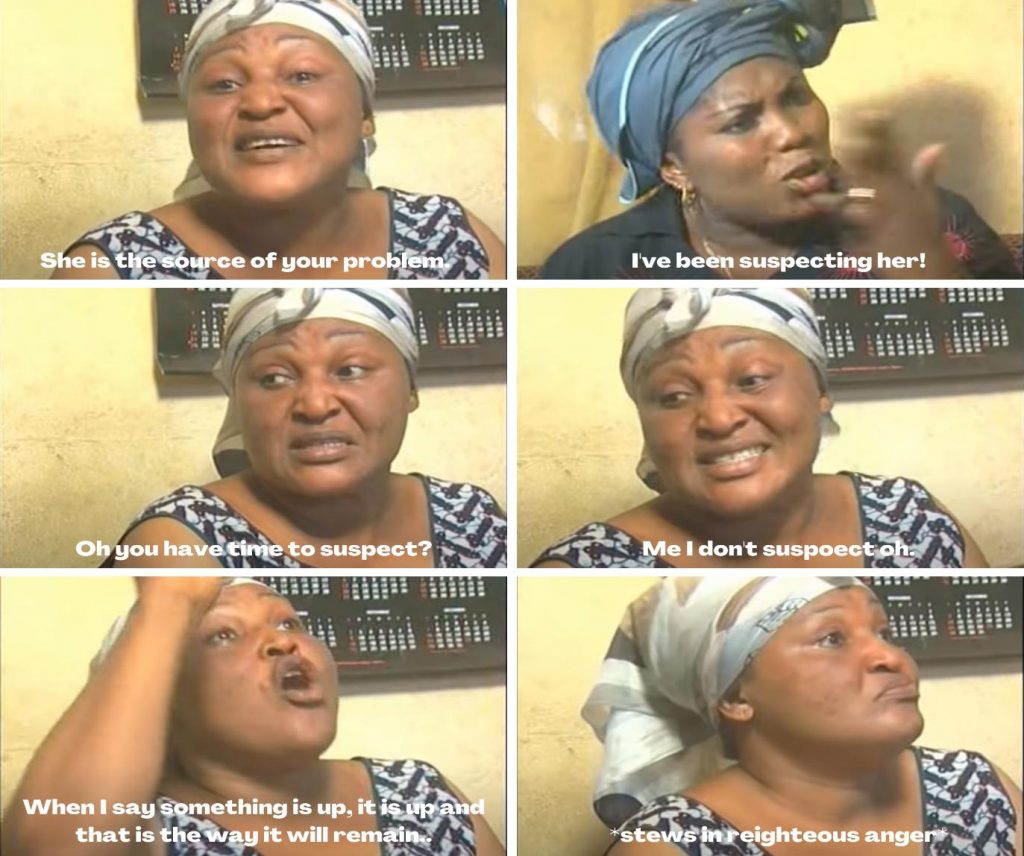 There’s no space for logic.

In some ways, our movies fuel our deepest fears, and we manifest them. The people chasing you are from your village? Why not? Your childlessness cannot be because of fertility issues, because why focus on what you can control when you can just look for the source of your fear in countless churches and prayer places? Nigerians love a good boogeyman they can blame for all their problems while taking no responsibility at all.

I could write for days about the trends I have observed in Nollywood movies, and how they’ve become a reflection of how we navigate our society, but it would be easier to tell you about a movie I once saw that was so ridiculous and so annoying that I created a playlist on YouTube for movies like it.

This particular work of art(?) was a story built around a prince (of course), his parents, and the independent woman he chose to be his wife. This prince came home after almost ten years of pursuing a master’s programme abroad. He had acquired a world-class education and mingled with the elite. You could tell, cos he had an accent now and everything. His proud parents threw a lavish party to welcome him home – and perhaps, introduce him to several potential wives. You know, typical Nollywood stuff.

Fast forward to a few weeks later, and his father started asking the question that had made its way into 500 Nollywood scripts: “my son, when will you marry?”

The prince didn’t want just any girl, you see. If he did, he would have taken his pick of the girls his mother had been inviting to the palace to parade in front of him like a fashion designer displays fabric. He wanted a particular girl, a girl he’d known when he was in secondary school, a special lady.

For months, he tried to track her down to no avail, but just as he’d given up, he had to process a bank transaction for his father, and lo, the branch manager was the girl of his dreams! After a joyous reintroduction, he started to pursue her with relentless enthusiasm, but was surprised to find that she was not enthusiastic about resuming their relationship.

The reason was simple: she liked him, but just wasn’t ready to get married yet – even at the ripe old age of 29. She’d just gotten the promotion to manager and bought her first house, but the prince was persistent, and Miss Independent started to ask herself, “would it really be so terrible to share my success and my life with a man I love?”

She agreed to marry him on the condition that she would keep her job and wait at least a year to start thinking about kids. The prince was so overjoyed, he didn’t hesitate to say yes.

The first time she met his parents, it didn’t go smoothly, as they found out that she didn’t come from royal stock -or any stock for that matter, and also had a few airs around her. They vehemently objected, but in spite of their stance, the prince goes ahead and marries Miss Independent. Immediately after the wedding, it occurs to her that she’d never asked where they would live. She thought he would move in with her, not expecting a grown man to still sleep in the room he had as a toddler in his parents’ house. Long story short, they both had to sleep in that room now.  Her new husband’s compromise was to tell her that he was looking to buy a house so that they could be together and raise their children there.

On the other hand, the prince swore to his mother that even on his honeymoon, her only child would not disappear from her sight again. It wasn’t as if they lacked servants to prepare meals or fulfill their every wish. Both women seemed happy, so it was a win-win.

The morning after their wedding night, the Queen came to change the sheets and do the laundry for her baby boy, as she always did. What she found prompted her to summon an emergency family meeting.

Newly-wedded Miss Independent was summoned and charges levelled against her.  Her first grievance? The absence of blood on the sheets was evidence that Miss Independent entered their hallowed hall without an intact hymen. Her second? The Queen held up a trembling hand with a condom wrapper in it. Miss Independent was ready to laugh, thinking it was a joke until she saw the condom wrapper. Then her mirth turned to incredulity. Had her new mother-in-law really entered their bedroom to look for evidence and investigate under what circumstances sex happened? Surely nobody was that intrusive, and besides, her parents-in-law were enlightened people. 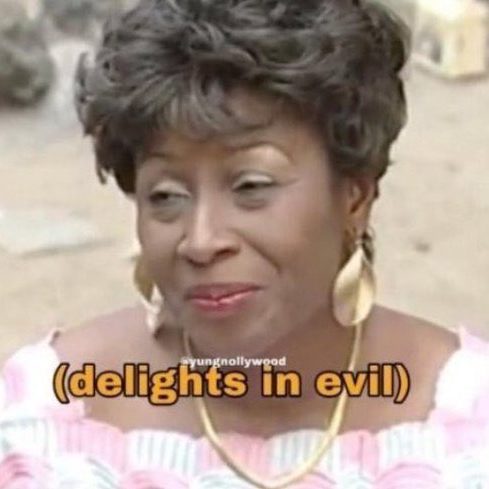 Instead of her husband-to-be to stand his ground, he was apologising to his mother with his eyes on the ground. The Queen reminded him that he was the only son, so his primary duty was to produce progeny immediately.

I would like to say this was the end of it, but it wasn’t. Their maids had to report to the Queen on whether she bought any sanitary pads every month. She was greeted at the breakfast table with questions in the lines of “are you pregnant yet?”, “hope no more condoms?”, and “how many times do you and your husband do it?” She was threatened with fertility tests and they tried to force her to drink concoctions. Her whole 3-month honeymoon leave was spent avoiding womb-watchers and fighting with her spineless husband.

When her leave was done and she had to go back to work, she faced another problem. The husband who had agreed with her that her job was important was nowhere to be found. Instead, she had to face a petulant child who resented the fact that she would be “working with those men” and “have no time for me”. She went to work, using that opportunity to issue an ultimatum of her own. She told the Prince that she was moving back to her house, and if he was serious about building a life with her, he would move there with her. Predictably, his parents wouldn’t have it, so they locked a grown man in his room until he was cured of his temporary madness, and then they got his wife arrested for “attempted kidnapping”. 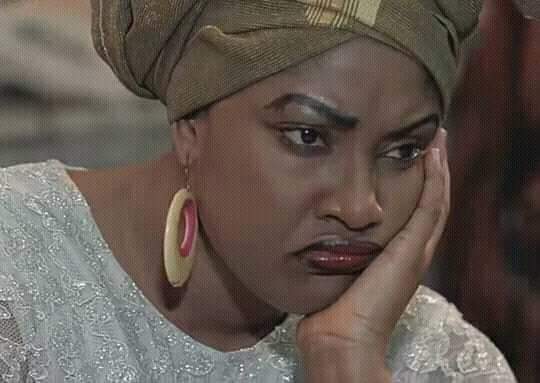 At this point, I was almost foaming at the mouth, and you can guess how the rest of the movie went.

Maybe Nollywood is not the problem. Art imitates life, right? That means that there are some women out there who thought they were entering into a loving union with a man, only for them to realise that his parents still wiped his nose for him. Some parents would really prefer for their sons to be in a loveless marriage with a girl whose highest achievement is knowing how to never say no, and where the possession of a WAEC certificate is optional. Why would you marry a vibrant, vital, driven woman with a lust for life, then dedicate the next few years to whittling her down until there’s nothing left of her?

Let’s start taking a closer look at how many things we have taken as gospel just because we have never questioned how it should be. Nollywood thrives on those stereotypes, feeding us narrow-minded views we have to work hard to overcome.

Nollywood movies are entertaining, though. Maybe not in the way you expect – those people are definitely not passing the Bechdel test anytime soon – but you will be educated all the same. At the very least, you will learn about Nigerian mothers-in-law and their default pet peeves.

Margaret Agwu is a writer, content creator, and feminist. She loves books, film, and culture-watching. Margaret is a regular columnist for Eat Drink Lagos.