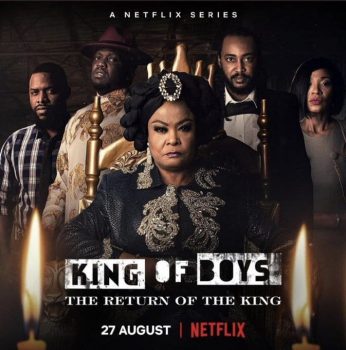 Marking Democracy Day: 5 Films about Nigeria’s Democracy (And Where to Find Them)

Once again, as Nigeria marks Democracy Day, debates are being had as to whether or not Nigeria truly practises democracy. This discourse is even more relevant this year, with less than a year before the next general elections in Nigeria. In fact, by the next June 12 event, Nigeria will have a new president, and many political offices across the country will be occupied by a new set of politicians.

Film has always been an important avenue for social and political commentary. Nigerian politics can be very dramatic, and if it were a more democratic country, Nigeria’s political scene would be an abundant source of material for its similarly dramatic film industry. Unfortunately, there are few Nollywood political drama films and even fewer that are specifically about democracy. Still, if you’re searching for films to watch this democracy period, Afrocritik has got you covered. Here are five Nollywood films (plus a TV series) about Nigeria’s democracy, and where to find them. 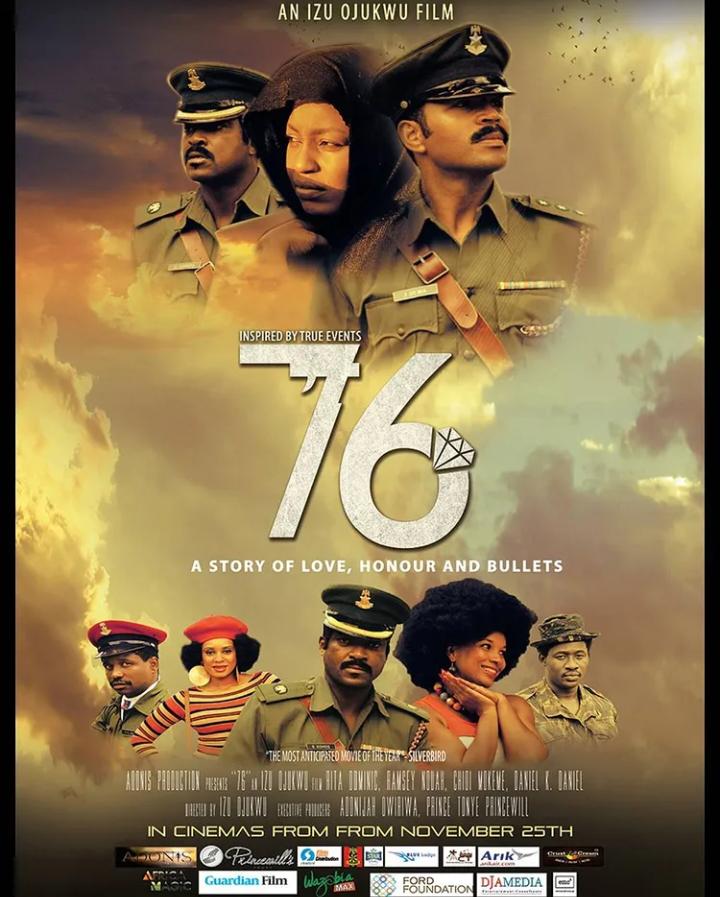 An Afrocritik favourite, ’76 stars three Nollywood veterans, alongside other wonderful actors, in a period thriller inspired by the foiled military coup of 1976. Set in an army barracks, it follows the love story of Captain Joseph Dewa and his wife Suzy in the days leading to and following the coup of ’76. Captain Dewa (played by Ramsey Noauh) is redeployed home suddenly after being away on his latest posting. Suzy (played by Rita Dominic) is pregnant with their first child. Before the captain gets a chance to properly settle back into his home, Major Gomos (portrayed by Chidi Mokeme), an old friend, seeks to recruit him to participate in a military coup. For majority of the second act, Dewa runs, with the coup plotters on his heels, as he ventures to blow the whistle on the operation. When the head of state is assassinated but the coup is foiled, true to history, Dewa gets implicated and is liable to be executed for treason. Suzy, fresh out of the labour room, attempts to prove her husband’s innocence.

’76 is a history lesson that doesn’t feel like a lecture. It’s an interesting and enjoyable movie with strong performances and a beautiful story. It’s not quite about democracy, but it makes our list because it’s about the lack of democracy. It portrays a Nigeria under military dictatorship — a Nigeria that actually existed at various times in history — and the scary reality of not having a voice at all. It’s a reminder of how valuable the right to vote and be voted for is, and why we should not take our franchise for granted.

Plus, the film is great. In our review, Afrocritik praised it for excelling as a period piece with a knack for detail and declared that, for years to come, it will sit comfortably as an instrumental piece in the set of Nollywood films that depict our past. The Hollywood Reporter called it a crash course in Nigerian cinema for international viewers and a worthy effort, noting that the film strikes a balance between educating and entertaining. The film even won Best Nigerian Film and Best Production Design at the 2017 Africa Movie Academy Awards.

Directed by Izu Ojukwu, ’76 premiered at the Toronto International Film Festival in 2016 and later screened at the BFI London Film Festival before it was released in theatres. In 2021, it became available for streaming on Netflix here. 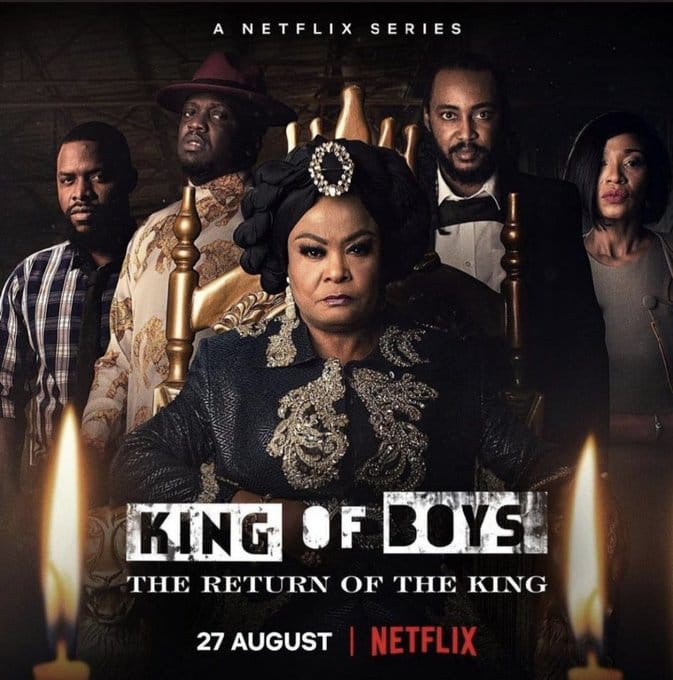 Kemi Adetiba’s KOB crime and political thriller franchise needs no introduction. If you haven’t heard of it, at least, you might be living under a rock. The 2018 King of Boys film and the 2021 sequel series, titled King of Boys: The Return of the King, follow the political ambitions of Alhaja Eniola Salami, a philanthropist and businesswoman, and a dangerous person. The “boys” she rules over are actually thugs and criminals. As the king of boys, she controls the Lagos State underworld, welding it as a tool for the purpose of securing and stealing elections. KOB is deliciously entertaining. Also, it is written in such a way as to make its evil protagonist sympathetic and likeable (we love Eniola, and we root for her to achieve all her ambitions onscreen, but in reality, she is exactly the type of person we don’t want in power). But the film and TV series are also an exposé on the rottenness of Nigeria’s political scene and the control that the underworld has over politics and elections in Nigeria — in Lagos, particularly. KOB brilliantly fictionalises the harsh realities of Nigeria’s democracy, and it looks aesthetically pretty while doing it.

Between the movie and the series, the franchise serves top-notch acting from some of Nollywood’s best exports. Eniola Salami, herself, is played by the award-winning Sola Sobowale. The original film is available here on Netflix while the sequel, which is a Netflix original series, is available to stream here. 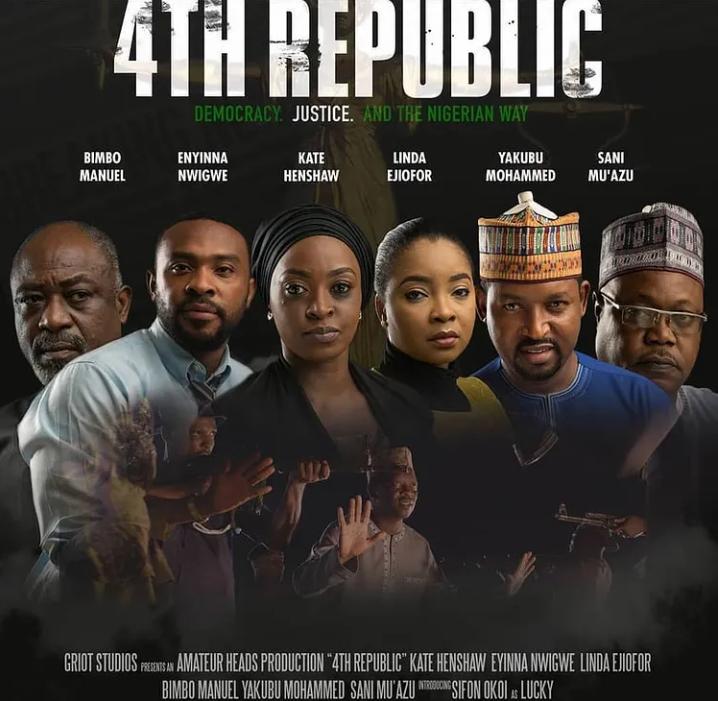 4th Republic is part political thriller, part legal drama — although it is more of the former than the latter. Like King of Boys, the film is an exposé on the state of Nigeria’s democracy, her judicial system, and her political process. It begins with a gubernatorial election for the fictional Confluence State. But the story actually follows the turbulent post-election waters in the state after the incumbent wins a second term, defeating the protagonist, Mabel King, in an election marred by violence and that claimed the life of King’s campaign manager. Determined to claim the victory she knows rightfully belongs to her, King institutes an election petition against the winning candidate and the electoral commission. What follows is corruption, more violence and some surprises, with both sides desperate to win the election petition.

Mabel King, like King of Boy’s Eniola Salami, is a philanthropist and businesswoman, but she is the exact opposite of Eniola. She is idealistic and motivated by a genuine interest in working for the masses. She definitely doesn’t have the leaders of the underworld on her payroll or political godfathers that she works for. And her fictional world is not as attractive as Eniola’s.

In fact, 4th Republic, itself, doesn’t have the shininess or exuberance of King of Boys. But that actually makes it more reflective of Nigeria’s political environment, even though it’s set in a fictional state. Confluence State really is a microcosm of the entire Nigeria, and its political environment a representation of that of Nigeria as a whole. Plus, the film handles its courtroom scenes so much better than other Nigerian legal dramas — like Charge and Bail. Oh, and you will never see that final plot twist coming.

The film was directed by Ishaya Bako (The Royal Hibiscus Hotel, Road to Yesterday) who co-wrote it with Emil B. Garuba (Lionheart, The Lost Café) and Zainab Omaki. It stars Kate Henshaw (who has real-life experience in running for political office) in the lead role flanked by Linda Ejiofor and Enyinna Nwigwe as major players on her campaign team. It also stars Bimbo Manuel, Sani Mu’azu and Yakubu Muhammed playing characters on the wrong side of democracy. Rekiya Ibrahim Atta also features as the incorruptible judge with the decisive vote on the election petition panel.

4th Republic was released around election period in 2019. With another election fast approaching, there is no better time to revisit the film. It is now available here on Amazon Prime Video.

Bright Wonder Obasi’s If I Am President 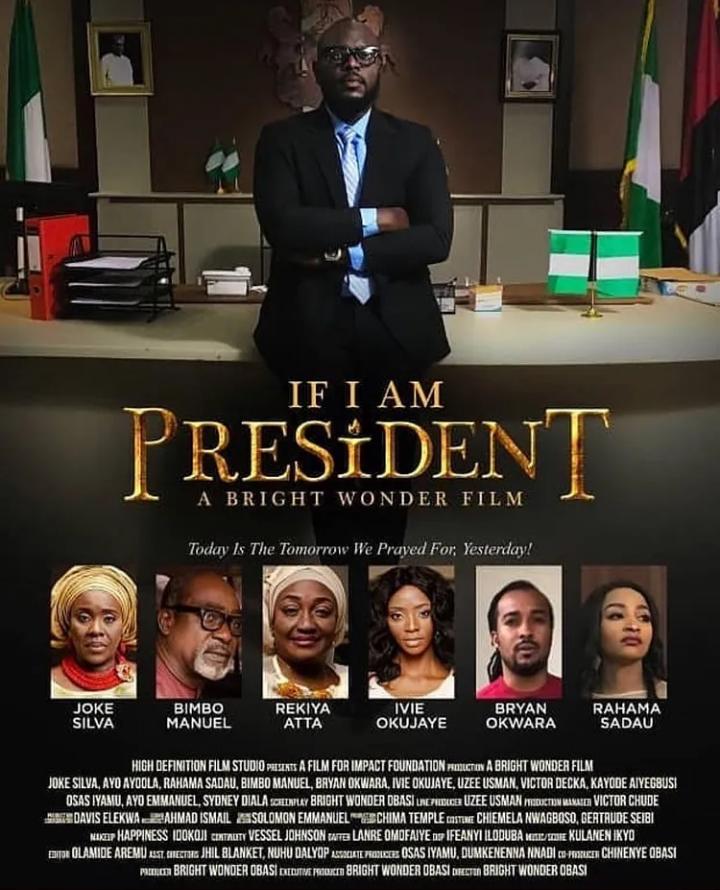 If what you need is some aspire to perspire-type movie to motivate and keep you optimistic about the possibility of having the democratic Nigeria of your dreams, then If I Am President is the film for you.

Written, directed and produced by Bright Wonder Obasi (Broken, My Name is Kadi), If I Am President follows the journey of one young, middle-class Nigerian man as he runs and campaigns for the highest office in the land. His name is Zinachi “Zina” Ohams, and he’s the idealistic presidential candidate of the Nigerian Rebirth Party, a brand new party formed by young, motivated members of a civil society organisation. Zina, along with his family and campaign team, struggles through attempted assassinations, false accusations, smear campaigns and systemic disenfranchisement. Yet, he holds on to his integrity and puts in the work, refusing to descend to the level of the politicians on the other side. The question is: can his method work? If it can, what must be done to make it work? In other words, what must the voting public do to overcome the difficult condition that is Nigeria’s democratic system?

In its two hours, the 2018 film shows how much of a sacrifice it can be to seek to exercise one’s right to vote or be voted for as an ordinary citizen who just wants to help fix Nigeria. Particularly, the film’s exploration of how peaceful protests get hijacked and the heavy hand with which the country’s law enforcement handles protests is a stark reminder (or, perhaps, a foreshadowing) of the tragedy of the 2020 #EndSARS protests. But the film also emphasises why the sacrifice is worth making, serving several reminders as to why it is fundamental to both register to vote and actually vote. It also demonstrates how the power of social media can be wielded in mobilising citizens.

Obasi’s film is sometimes too simplistic and considerably preachy. And it also doesn’t always feel very realistic. But it might be the motivation you need to force you to get your Permanent Voter’s Card and exercise your franchise. Plus the character of Zina is played by fan-favourite Ayoola Ayolola (of Skinny Girl in Transit and The Men’s Club) with supporting roles played by Rahama Sadau and Ivie Okujaye. The cast also features veterans like Bimbo Manuel in yet another film where he is on the wrong side of politics, Joke Silva as a professor hoping to be the first female president of Nigeria, and Rekiya Ibrahim Atta as a former contender who withdraws from the presidential race to join Zina’s team.

In Obasi’s own words, “If I Am President is a movement to birth and sustain that great nation we all yearn for.” Because of this primary goal, the production team has made the movie available for free on YouTube. You can stream it here.

EbonyLife and Funke Akindele’s Your Excellency 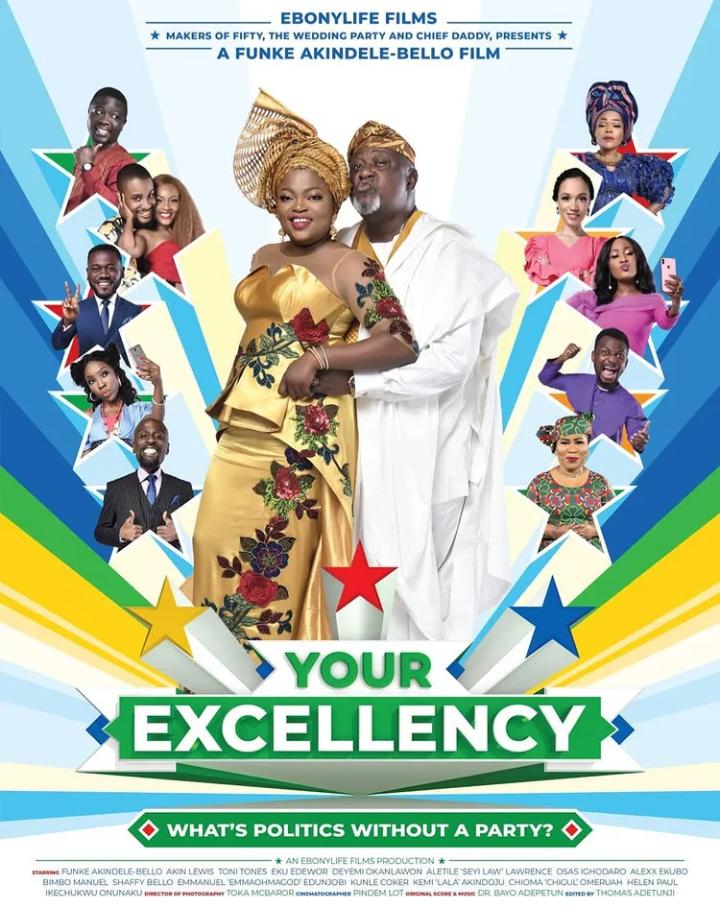 Comedy is basically Nollywood’s favourite genre. So it’s very unlikely that a list of film recommendations such as this will not include a comedy film. Your Excellency is a 2019 EbonyLife political satire comedy film directed by Funke Akindele (Omo Ghetto: The Saga) who also stars in the film.

Akin Lewis plays Chief Olalekan Ajadi, a wealthy businessman and joker of a politician with a Donald Trump obsession. Ajadi has run for president three times on the platform of the fictional “Republican Party of Nigeria” — which he co-founded — with no success. In fact, he has never been a serious candidate. But after he gets invited to join a major political party, by party leaders who intend to use him as their money bag for the upcoming elections, he finds himself better positioned than ever to run for president. And with the help of social media and a lot of very public dancing, as well as the backing of his second wife (played by Akindele), he soon becomes a strong contender for the office.

There is almost nothing serious about the film, and it’s more of a farce than a proper satire. It’s really not much more than a two-hour comedy skit that subtly mocks certain real-life politicians, political events and media personalities. But if you’d rather just laugh this democracy period than be reminded of the sorry condition of Nigeria’s politics — or if you’d prefer to be reminded with jokes about dancing politicians and ministries of happiness — then Your Excellency is here for you to stream on Netflix.