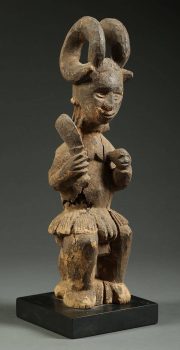 The Ikenga Deity, A Conduit For Igbo Communal Philosophy And Individual Reflection

The worldview of the Igbo people on masculinity is strongly linked with physical strength. To the Igbo, a real man must be physically strong, and the measure of his masculinity is how he manages to live up to the ideals of strength. So influential was this worldview in ancient Igbo society that in the evolution of Igbo cosmology, the people invented a deity, primarily to serve as an insignia depicting the strength of a man. The deity is more or less a personal deity and is (usually) owned by the head of the home. 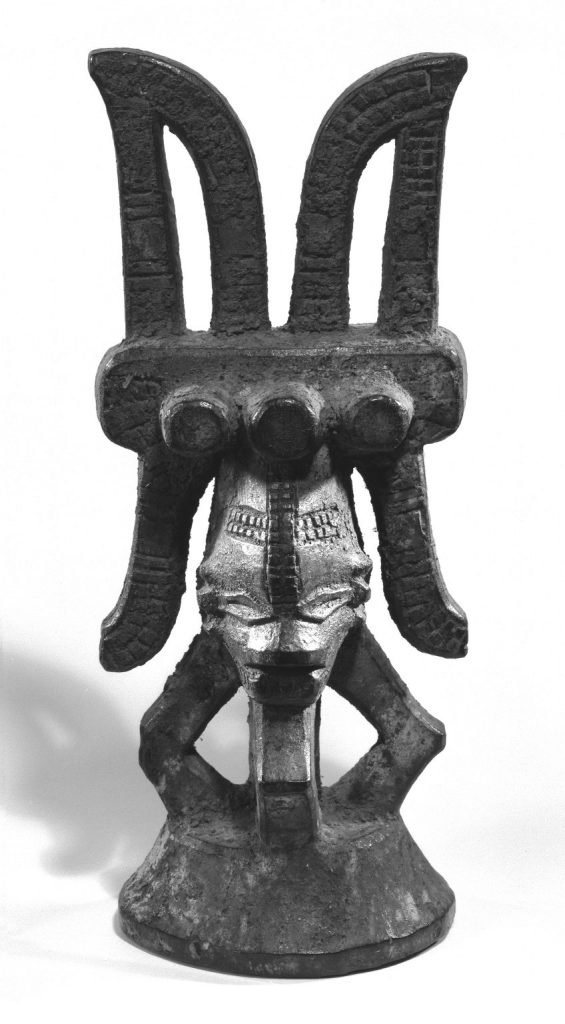 The Ikenga is usually designed as a full human being with horns, having a fierce expression, holding objects in both hands, and seated on a stool. Alternatively, it could be designed as a cylinder with horns.

There are three forms of the Ikenga: the warrior, the community, and the titleholder. The design of a particular Ikenga is partly influenced by its form. The warrior form is designed with the Ikenga holding a knife on its right hand, and a tusk or a severed human head on the left. The community Ikenga builds on the structure of the warrior form with human and animal images. The titleholder form involves a design that sees the Ikenga placed on a three-legged stool, then carrying a tusk and staff like the typical Ozọ titleholder in Igbo land. 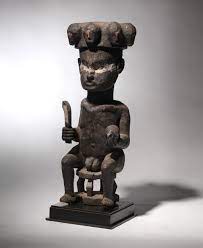 Ikenga is made up of two words: Ike (meaning “strength”) and nga (meaning “place”). Accordingly, in Igbo tradition, the Ikenga is regarded as the strength of a man. However well or badly a man is doing at every point in his life is an indicator of how strong (or otherwise) his Ikenga is. For this reason, when a man comes out of a trying situation unscathed, it is common for him to say, “Ikenga’m sịrị ike” (my Ikenga is strong) in praise of his Ikenga. Conversely, when a man is plagued by unfortunate events around him, he takes to blaming his Ikenga. When a man is doing well, he is very happy with his Ikenga and he extols it, makes sacrifices to it, and hangs it at the top of his hut. But when he is not doing well, he despises his Ikenga, brings it down from the top of his house, and leaves it on the ground, untended, to signify his displeasure at the deity.

Ikenga is not a deity to be revered unconditionally. It (compulsorily) plays the role of a deity and a servant. It has a duty to cater to the prosperity of a man, and to see that the man in whose house it rests grows in stature and status. If the deity performs the duty well, he is revered. If he does not, he is despised.

The manner in which a man relates with his Ikenga in terms of his progression in life also holds out the diety as a vehicle for personal reflection. The Igbo recognize that a good life is one frequently examined for better ways to live, involving the implementation of lessons from the said examination. In this way, the institution of the Ikenga reflects the outlook of the Igbo people on life, which is reflective and deeply philosophical. It also serves this purpose in a communal context (as in the case of the community Ikenga), and so, the Igbo philosophy of living a good life through individual reflection is ultimately practised in the collective as well. In the context of the title holders, the Ikenga embodies integrity, might, and authority.  The Ikenga is not associated with morality or other ethics usually ascribed to Omenaala. It is a deity that exists simply for the reason of bringing wealth and good fortune to a man’s household. 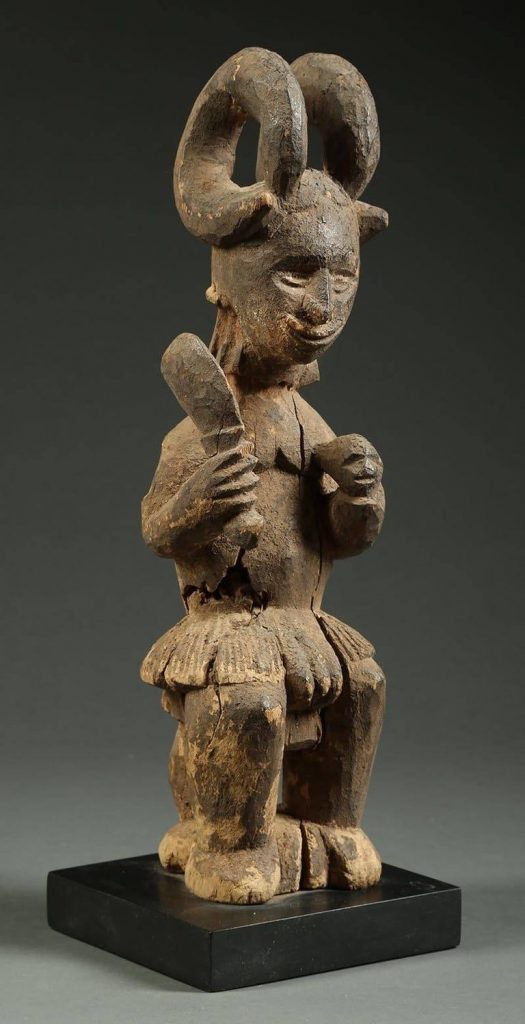 The institution of the Ikenga is a product of Igbo philosophy, which posits that when things are going well with a man, he ought to prosper, and when things are going well with a community, they ought to prosper. In the case of the Ọzọ, the prevailing rhetoric is that when a man is prosperous as he should be, he becomes a man of authority and he gains power. This is to say that the Ikenga can also serve as a mirror to its owners. Through worship and prayer to the Ikenga, people lay out their aspirations, confess their wishes in earnest and solemn prayers, then go into the world and do the best they can do to make their dreams come true. They measure the strength and power of their Ikenga through the outcome of their travails.  These are very well known, but what is usually glossed over by practitioners of Igbo traditional religion is that in assessing the Ikenga, the owners also assess themselves, spiritually and psychologically. It’s like pointing fingers: when one finger is directed at the Ikenga, the other fingers point back at its owner, or whoever is making an inquiry of the deity.

Michael Chiedoziem Chukwudera is a writer and freelance journalist. You can reach him at chukwuderamichael@gmail.com