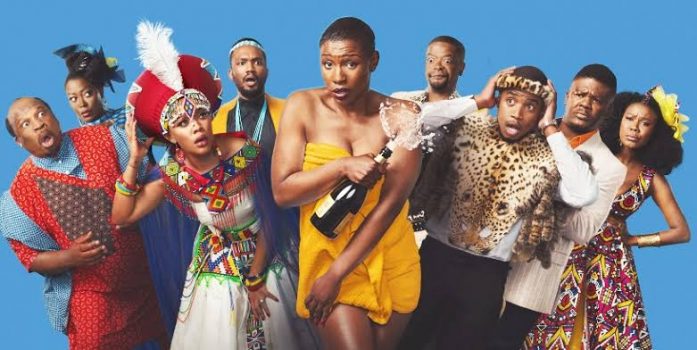 Netflix Series: A Review of South Africa’s “How To Ruin Christmas: The Wedding” First Season on Netflix

If you thought that Nollywood’s blockbuster film series “The Wedding Party” showed how bad things can get at an African wedding, or any wedding at all, “How to Ruin Christmas: The Wedding” shows that it can get worse.

“I’m sure there is a perfectly logical explanation to all of this,” Aunt Grace (Rami Chuene) says in the opening scene of the three-episode first season of “How to Ruin Christmas: The Wedding.”

Clothes, underwear and empty wine bottles litter the poolside; Minister Vuzi Twala (Saint Seseli) is worried about what the vultures in the media might say if they found out about the situation; Sbu (Sandile Mahlangu) struggles to keep Lydia (Swankie Mafoko) from possibly committing murder; a sheep called Succulent bleats in the corner; and Tumi (Busisiwe Lurayi) is lying on a floater in the pool, just waking up from what was clearly a wild night. As Tumi studies her surrounding with sleepy eyes, a voiceover tells us what she is thinking: “I swear this is not what it looks like.” By the end of the first episode, we get the full picture. Again, we hear her: “It’s worse.”

If you thought that Nollywood’s blockbuster film series “The Wedding Party” showed how bad things can get at an African wedding, or any wedding at all, “How to Ruin Christmas: The Wedding” shows that it can get worse. In this South African Netflix Original TV Series, the Sellos and Twalas are set for a grand Christmas wedding. Beauty Sello (Thando Thabethe) is a Tswana woman getting married to Sibusiso “Sbu” Twala, a Zulu man, in a three-day traditional and white wedding. Despite their ethnic, class and financial differences, it is manifestly clear that these two truly love each other. But their families do not get along.

Sbu is the son of Vuzi Twala — a government minister “of distinction” whose only worry for the entirety of the series is the camera crew coming to capture the extravagant and lavish wedding he is throwing his son at the Four Seasons Hotel — and Valencia Twala (Charmaine Mtinta) who considers Beauty’s family to be undeserving of her own family’s class and wealth. Beauty’s mother, Dineo Sello (Clementine Mosimane), is a single mother whose husband left her and her daughters very early in their marriage. And then, there’s Beauty’s older sister, Tumi Sello, the star of the show who has mummy issues and does as she pleases, always leaving a mess in her wake.

Everything goes south before the wedding even starts, with Gogo Twala (Nandi Nyembe), Sbu’s grandmother, watching from a balcony half of the time. Dress fittings are being done last minute. The towels needed for the cultural welcoming ceremony have been totally forgotten. The groom’s brother and best man, Themba Twala (Motlatsi Mafatshe), is missing. At some point, it looks like the wedding might be called off and the bride price returned.

Then the wedding is back on, but the bride takes off when guests have already started arriving. And then, a secret gets revealed, and it looks like the wedding might be cancelled for real, this time. Plus, a sheep has been let loose in the Four Seasons. And the very many mishaps threatening to ruin Christmas and wreck Beauty’s dream wedding can be traced back to Tumi — except the missing sheep.

Meanwhile, almost always by Tumi’s side but at the same time hanging in the background, is her best friend Khaya (Yonda Thomas) whose feelings for her are evident from the first scene in which we see them together. Thankfully, it does appear that the feelings are mutual. But, of course, Tumi messes that one up, too. We are not presented with a series of unfortunate events. Tumi is not an unfortunate woman who gets unlucky; she is a reckless one who makes unforgivably bad decisions. But she is not a bad person. She is human; with a history that shaped her attitude and makes her understandable, even relatable, but do not ever justify her terrible decisions.

In making Tumi — and the families, by extension — the centre of attention, “How to Ruin Christmas” relegates Beauty and Sbu to the background, barely giving them space to be involved in the events that play out in the course of their wedding. Even when they participate, they are often stripped of control. This is not a fault on the part of the series, though. It is, by both artistic and cultural design, an almost inevitable outcome.

In many parts of Africa, weddings are not about the people getting wedded, but are about the families. And so, as it often turns out, guests are invited and activities arranged by the families. And, of course, disasters are mostly caused by the families. In this case, while nearly everyone has a hand or two in the chaos that the wedding becomes, especially with their various backgrounds rearing their heads in form of the many shades of ugliness that are put on show, the drama almost always begins with Tumi. Like Khaya said, they are all “bystanders on the Tumi show.”

But it is interesting to observe the mellow feel of Beauty and Sbu’s relationship, a stark contrast to all the craziness surrounding them. With the exception (maybe) of Gogo and Beauty’s Aunt Moipone (Keketso Semoko), and despite Beauty’s slight narcissism, the couple appear to be the least dramatic people in their families. In the very few scenes that centre them, Sbu’s gentleness permeates the air and rubs off on Beauty as well. In these scenes, we find some relief. And in the mostly sip-wine-and-chill soundtrack, we find distraction from all the noise.

At this point, it is redundant to note that the series is heavy with drama. However, in important but fleeting moments, it exposes cultural and societal flaws, from superstitions and potentially harmful ideas, to racial and ethnic tensions.

Beauty thinks that her wedding is falling apart because she does not have the blessing of the father who abandoned her as a child. Lydia’s concern about her husband’s infidelity is casually shut down with a “You must persevere in marriage” quote from Gogo. Valencia refuses to let go of the fact that Beauty is not Zulu. Dineo pokes fun at Candice (Kate Normington), the Caucasian hotel manager, when the latter implies that the hotel’s “aesthetic doesn’t accommodate Black people.”

And when Candice seems to mistake Minister Twala’s brother, Siya (Trevor Gumbi), for Zulu royalty and feels the need to bow to him, we are reminded of the scene from “Avengers: Infinity War” where caucasian Bruce Banner (Mark Ruffalo) felt the same need to bow to the African King T’Challa (Chadwick Boseman).

It would be remiss to not acknowledge the nostalgia that is aroused when Brenda Fassie’s iconic wedding song “Vuli Ndlela” comes on in the background; or Lance Gewer’s skilfulness in capturing the scenery and landscape surrounding the series, making them characters on their own, while carefully focusing on the human characters themselves; or how the series stays true to the culture it professes without pandering to an international audience.

Simply put, “How to Ruin Christmas” is a hilarious, delightful, relatable, culturally-rich, and entertaining comedy of errors. There is no dull moment. But there is too much happening in it, and there are too few opportunities to just stop to catch your breath. Tumi herself puts it perfectly when she says the very last words of the season: “Can’t a girl catch a fucking break?”

Yet, although the series sometimes feel scatterbrained, it is not forgetful. It remembers all the issues and conflicts teased and attempts to resolve most of them — even if it does not do so with enough depth — leaving some on the table to be further explored, possibly, in future seasons. It also ends with a cliffhanger, teasing a return. Gratefully, a second season is coming in a week’s time when Tumi will grace our screens again, the field of landmines that she is, with what promises to be another ruined Christmas.