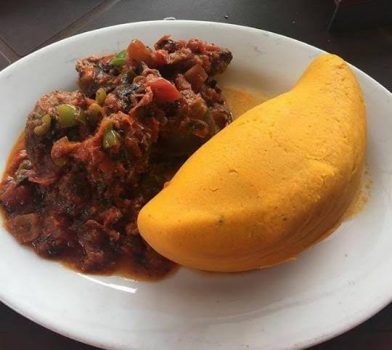 Onunu is a traditional dish served by the Ijaws in the South-South region of Nigeria. However, unlike staples such as amala, eba and iyan, onunu has yet to achieve national recognition like its more popular counterparts, despite arguably being a delicious meal. Indeed, onunu should be one of the kings of swallows eaten in Nigeria.

The reason for onunu‘s seeming obscurity is perhaps owed to the fact that the Ijaw tribe is one of many minor tribes in Nigeria, and as a result, the Ijaw culture is not as spotlighted and celebrated in other parts of the country. Amala, for instance, belongs to the Yoruba people, theirs being one of the three major tribes in Nigeria; whereas eba has been argued to originate from the Igbo culture, which is another major tribe. Iyan is a swallow endorsed by the Igbos, the Yorubas and even the Hausas (the final major tribe in the country). With the prominence of these three cultures, it is no surprise that their traditional dishes are well-known in most parts of Nigeria, whereas onunu remains something akin to an exceptionally talented musician who has yet to achieve mainstream success.

One might be compelled to ask why onunu could be considered superior swallow. Well, this is simply because of its excellent combination of two of our favourite carbohydrate-giving foods — yams and plantains. Onunu is a sublime-tasting mixture of cooked yams and ripe plantains, mashed together to form a perfectly silky swallow.

In the past, onunu was served particularly to royalty, and it was made specially for royal wives as well as new mothers who were just delivered of a baby. It was also served in fattening rooms, a practice which mainly the wealthy could afford to participate. It was the chosen dish for such events not only for its exquisite taste, but also for its many health benefits and nutritional value. In relatively recent times, it is not only offered to new mothers and blue bloods, but also during traditional weddings and on other special occasions.

As though it is not mouth-wateringly delectable on its own, onunu is paired with odu, an equally delicious fresh fish stew. The fish used may be snappers (agbara) or catfish (singi), or others. Onunu can also be eaten with the more native ikili stew.

It is understandable that after reading this, you might be eager to try this delicacy. And because this writer is thoughtful, below is an easy guide on how to prepare onunu, with its tag along fish broth.

The ingredients for making onunu and fish stew include yams, ripe plantains, palm oil, fish (any of the above mentioned or your preferred fish), fresh tomatoes blended with fresh peppers and onions, seasoning (salt, seasoning cubes and fish seasoning), and spices (dry peppers, ginger and garlic, etc).

Peel, wash and cut yams into cubes. Peel and cut the ripe plantains into bigger sizes than the yams. Afterwards, boil your cubed yams for approximately 9 – 10 minutes (halfway cooked), then, add the plantains to the half-cooked yams. At this stage when the yams and plantains are almost fully cooked, put in some salt (just a bit if you want it sweet) and then, leave to boil until the yams and plantains are quite soft.
Once cooked, pound your yams first. Then, add the cooked plantains to the mashed yams and pound together. It is important to ensure that there is a near equal ratio of yams to plantains in the mix. Add a bit of palm oil and pound some more, until the mixture appears smooth and yellowy. Voila! You have yourself some great onunu to enjoy.

How to prepare odu

With your spices and seasoning, steam the fish on low heat until it is fit for consumption. Then, heat your palm oil. Add your blended mixture of onions, tomatoes and peppers to the heated palm oil, and after approximately 5 minutes, add the fish stock and a bit of water and leave to cook for just a short while. It is important to taste your stew at this stage, so that you might include more seasoning or dry peppers if required, perhaps even more water if necessary. If satisfied with the taste, add your steamed fish and reduce the heat. Remember to stir gently so that the fish does not break. Cook fish stew for about 5 more minutes before turning off your cooker.

Once you have had your onunu and odu, you might be compelled to agree that onunu surely deserves more recognition than it gets.

Nicole Philips-Kemenanabo is a writer, poet, lawyer and an artist located in Abuja, Nigeria. In 2020, she was amongst the top 20 finalists in the National Art Competition hosted by UNESCO under the theme of “Sheroes.” You can find some of her work on Instagram @NicolePhilipsArt.