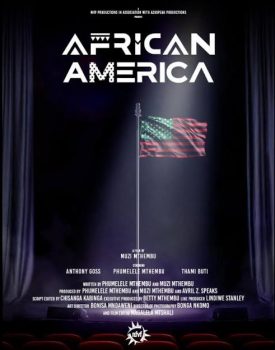 Free but Unequal: A Review of African America

Black women are seen as ready and desperate to lighten their skin tone, all in a bid to get validation and be treated differently…

African American, as the name depicts, is an ethnic group consisting of Americans with partial or total ancestry from any of the black racial groups of Africa. “African Americans” are the descendants of enslaved Africans from the time of slavery who never left the soil of the United States of America.

African America, a Muzi Mthembu film, reemerged on Netflix in 2021, after its production in 2018 and first showing in 2021 at the Pan African Film and Arts Festival. The movie, which was put together based on a true story, was written by Muzi after his Sister, Phumi Mthembu, had returned from New York City where she had gone to study music and drama studies and had a firsthand encounter with displacement and the unjust treatment given to Africans in America.

At a glance at this movie, one is sure to understand that, although independence and equality is preached, Africans are never totally free and might never be treated equally to Whites. The movie shows the cultural mix of South Africa and America, in the practices of love and marriage, while showing the obstacles faced by an average Black man in America. Donald Trump, racial injustice, White Privilege and Black turning against Black, were all recounted in this work.

The movie centres on Nompumelelo (Lelo) (played by Phumi Mthembu), a young woman in her prime, who decides to leave home and everything she worked for, to chase her dream on Broadway. She embezzles funds from her workplace and leaves her fiance, Tumelo (Thumi Buti), her family and friends, on her journey to self-discovery. Not long after her arrival, she discovers that New York wasn’t all she had dreamed it to be. She faces the traumatising experience of betrayal, racial injustice, and white privilege.

Opening with a South African ancestral marital practice, our eye meets one of its most essential cultural practices: advice. The older ladies in the family gather to advise the woman on how a good wife should behave. They don’t fail to attach the cliche line that “the woman’s job starts from the kitchen and ends in the bedroom.” Being a 21st-century woman, Lelo as later referred to, wanted more. She wanted a career and a life, which having been paid for, made her feel bought. However, beyond the cold feet, she had what mattered the most, A good man, one she incessantly showed her doubts about commitment and he still stuck by her.

Lelo however decides to chase the dream her mother kept away from her. She embezzles company funds and sets out to New York, to live her dreams. Creating a mess of things with how she leaves, Lelo’s mother and everyone she cares about is left to pick the pieces and fix Lelo’s mistakes. Things begin to go south after Lelo’s accounts get frozen and she sets out to work in other to survive in the city. She meets an African woman, Adjwoa (Gontse Ntshegang) who later becomes a significant part of Lelo’s stay in the city. Muzi ensures he sends out detailed messages in this work as he inputs the Trump Wall which, at the time of production, was on every headline in the United States.

The envious nature of the humans kicks into play when Jauquan (Anthony Goss) a black citizen of the United States, to who Lelo was now married in a bid to secure her Green card, begins to detest Lelo, to the extent of hitting her in rage, an experience Adjwoa referred to as the “Green Card black eyes.” This statement alone tells the story of many, the struggle pains and endurance of getting the green card, a card many have but still face racial injustice. In most cases, the inferiority and inequity have made the people of colour see their tanned skin as a problem and the reason for being mistreated. Black women are seen as ready and desperate to lighten their skin tone, all in a bid to get validation and be treated differently, a majority of Latinos said in a research by pewresearch.org, “Skin colour, impacts opportunity in America.”

Lelo faces betrayal from her best friend, Phindi (Jandile Lujabe) who wastes no time jumping into bed with Tumelo, while her friend was away. This is a reason to recall what Lelo’s aunty had said during the marital advice: “all those women outside want what you have.”

Phindi is proof that betrayal never comes from your enemy, it’s always your close friend. Leaving in such a disrupt manner, Lelo did burn her bridges as she rightfully said in a conversation with Jacquan. She made a mess of her life, and although the movie keeps circling, trying to make justifications for her actions, the fact remains that she had a good life, and she threw it all away for a dream. Phindi only got a chance as a result of Lelo’s choices.

It is almost as though they were trying to copy in all the possible things that could go wrong in an African-American setting, with Lelo’s gig as a nanny for an interracial couple feeling like a subplot put in to reflect white privilege, and the auditions like an avenue to highlight racial injustice.

Considering it is their first production, a pass is given to the Mthembu siblings for their shaky editing and bad lighting, which we blame on a limited budget. There are questionable situations where a scene is played out and gets intercut by actors reacting to it in real-time, thus killing the engaging suspense and losing the viewers for a second. As though getting to a point (which leads nowhere, by the way), there are cuts of Lelo just staring at the walls in her room or aimlessly travelling on New York’s subway train.

Besides this, African America is quite engaging and communicative. Lelo knows that it is her story, and she’s not just any other character. She lived the story; therefore, she delivers. Jaquan’s character is a citizen of the United States, whose dreams were displaced because he raised his voice against a white woman. He didn’t hit her, nor attack her, he didn’t even have a gun. He had only used his voice. Now that’s a problem. Was he sent out of directory school because it was a crime to raise his voice, or because he was black? His breakdown while talking about this to Lelo made it clear that America was all most of them knew, but she was lucky to have a home in Africa. Jacquan as a representative of all African Americans shows that the fight isn’t for citizenship, rather for acknowledgement, respect and most of all equality. Jacquan does a good job, and his impactful acting, rage and swing of emotions are felt by the viewers.

African America tells the story of the American Dream, only this time, it isn’t James Stewart’s view of America in Mr Smith goes to Washington. In a way, we could draw comparisons between Jacquan’s story and that of the five black males in Ava DuVernay’s 2019 American crime drama, When They See Us. It is no coincidence that both stories involve men of colour, in a society where racial injustice exists, there is little or no effort put in to justify their innocence.

The fascination of this work is in how Muzi unapologetically scripts his South African view of America. With no fear or prejudices, he tells the story of terror most Africans are living in but are unwilling to speak of. Nompumelelo’s return home is a significant message to all Africans facing the same pain, trauma or humiliation she faced, that Africa is their home, and they will always be welcomed with open arms.