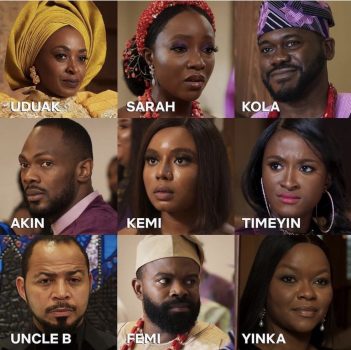 Criticisms against Nollywood have often zeroed in on the quality of its storytelling — its attention to detail and overall coherence and smarts. Blood Sisters is, mostly, free of such impediments. It’s a well-told story, skillfully marshalled by Kenneth Gyang and Biyi Bandele…

You can’t watch EbonyLife’s newest production, Blood Sisters, without catching the salute it gives to that ancient Greek tragedy, Oedipus Rex. Oedipus, unwittingly, slays his father then beds his mother. While there’s no barefaced incest in this new Netflix series, there is an unnatural intimacy between Kola Ademola (Deyemi Okanlawon) and his mother. His mother, whom Kate Henshaw plays, is a stiff-necked Cersei Lannister, with a heart that really is a cup of hemlock. Henshaw here is as joyless as her 4th Republic incarnation. Only her son, with whom she shares illicit Oedipal kisses, brings sunlight to her face. What’s missing though is a dramatic patricide. A dead father lurks nonetheless, but it is Kola’s dead and headless body that fillips the story forward.

Here’s one theory: Chief Daddy 2 is a social experiment, designed to test the Nigerian tolerance for dreck. That movie was so bad, this explanation seems the only dignifying one that its producers can bury their heads behind. If Chief Daddy 2 is Adam’s freefall from grace, Blood Sisters is Michelangelo’s Adam, and Mo Abudu’s plump and plaintive hands, reaching for redemption. That redemption has been attained, and EbonyLife has won back some of the cachet lost in the early parts of the year. Yet some things do not and cannot change. Hannibal Lecter will sooner become a vegetarian than EbonyLife will lose its appetite for merriment. An EbonyLife picture without a party scene is like an Eminem song without profanity. The Chief Daddy movies have both a wedding and a funeral party. Wedding Party has, well, a wedding party. Blood Sisters’ opening scenes, keeping to tradition, comprise a wedding. The couple, Kola and Sarah (Ini Dima Okojie), are to all appearances perfectly matched. But as all romantic unions, anyone looking at it from the outside only knows half of the story. Only Sarah herself, her best friend Kemi (Nancy Isime) and, as we later learn, Kola’s mother, are privy to the real story — the real Kola.

The real Kola resembles Pablo Picasso, and I wonder if the series’ creator, Temidayo Makanjuola, had the Spanish Cubist painter in mind when she made the character’s composite sketch. Both Picasso and Kola are artists. Both are also nasty towards the women in their lives. Picasso, certain anecdotes claim, was as emotionally, perhaps physically, abusive to his lovers as he was passionate about his art. He once told his mistress Françoise Gilot that “women are machines for suffering.” Kola might as well have made that statement, albeit with a subordinate clause embedded: “Women are machines for suffering, but also conduits for painterly muse.”

Kola, it turns out, is just as egoistic, unused to getting turned down, as any rich and spoiled mommy’s boy. Sarah, weary of getting whacked on whim, tells Kola on their wedding day that she will no longer be marrying him. Rather foolishly, she delivers the news while alone in a room with him. He pleads, but she refuses. Then he stops pleading and starts pounding and strangling. Kemi walks in, sees Kola mauling his fiancée, and a struggle ensues. It ends with Kemi shooting Kola. He perishes, and so do the women’s lives as they know it. Here’s where the series gets it right. Overlooking its overt western influences — a swanky detective who rolls his r’s one too many times; a chase through a kitchen that seems transplanted from a Jason Bourne movie — the series is Nigerian when it most matters. The American thing to do would be the two women calling on the police and trusting the courts to rule that the killing was done in self-defence. The Nigerian thing to do, as the women smartly deduce, is to run like hell, understanding that you’d have better luck squeezing syrup out of a stone than getting a fair hearing in a Nigerian court when you are poor and your opposition is as rich as the Ademolas. And so the women make a run for it, leaving behind their lives, their jobs, and conspicuously in Kemi’s case, her wig. 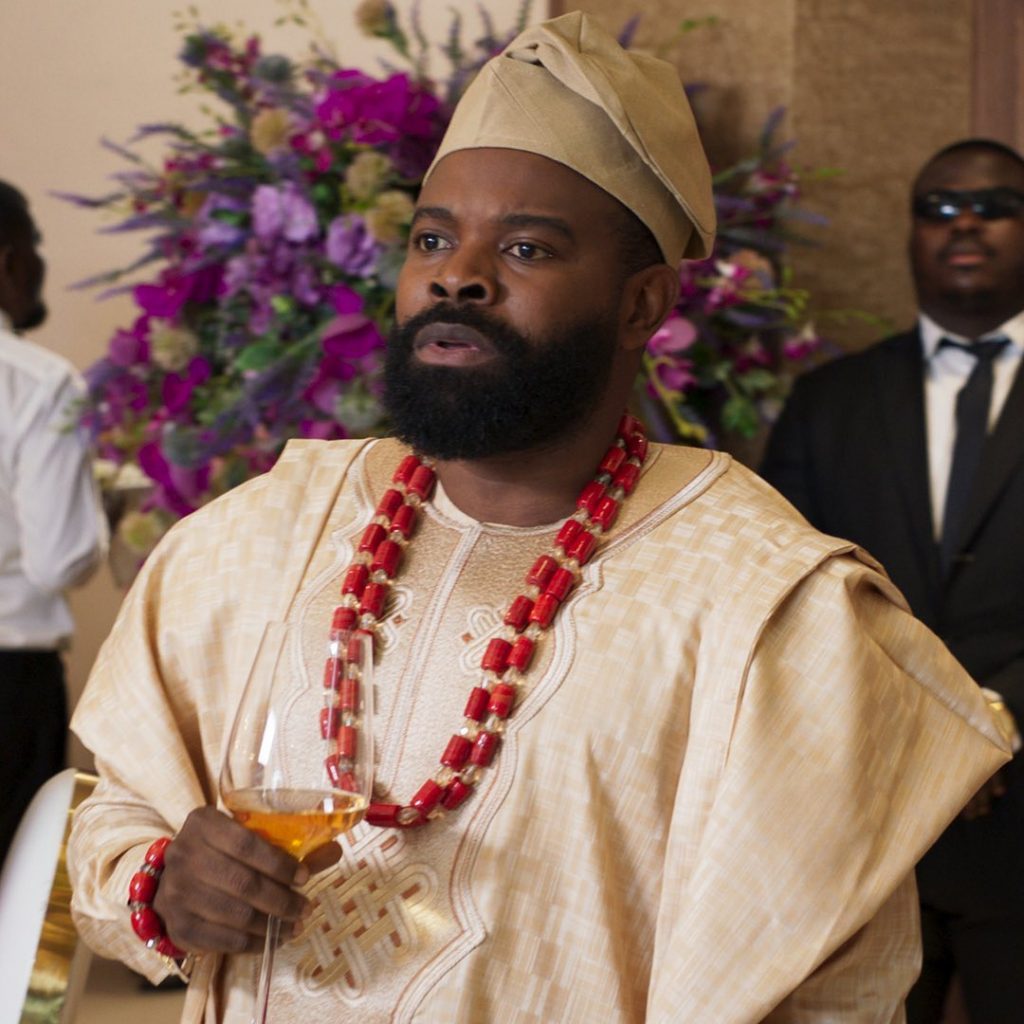 The two women are the world’s unluckiest fugitives. Their plan to beeline into the Republic of Benin meets a series of setbacks that has you wondering how anyone could be so unlucky. But then we all know that thing about the best laid schemes of mice and women. They chance on a blackmailer, an organ harvester, and a scoundrel who will only ferry the women away from impending capture if they let him do to their breasts as he pleases. It is implied that one or both of them give in to his demands. The women’s determination, like their brassieres, are out for all to see. Will their grit see them through to the end? The series, never dull at any moment, leads the viewer to a climactic answer.

While the two women fight for survival, the Ademola family gives us a lovely treat of entropy. The family members are so wacky, the chance of getting into their heads would excite Sigmund Freud with a boner. In this family, the matriarch kisses her youngest son in the mouth and hates her daughter; the daughter wants cocaine but, like the eldest son, wants even more if only a sniff of mother’s approval. The eldest son, Femi, (played by Gabriel Afolayan) is in a screwy marriage with Olayinka (Kehinde Bankole), the two as sex-manic as rabbits pumped with Viagra. A man of abbreviated height, standing beside his wife Femi strikes a clownish figure, looking like a small petulant child beside his mother at the mall, pestering for ice cream. The stark contrast in height just as well signals who the man is in the relationship. Here’s a clue: it is not the man. 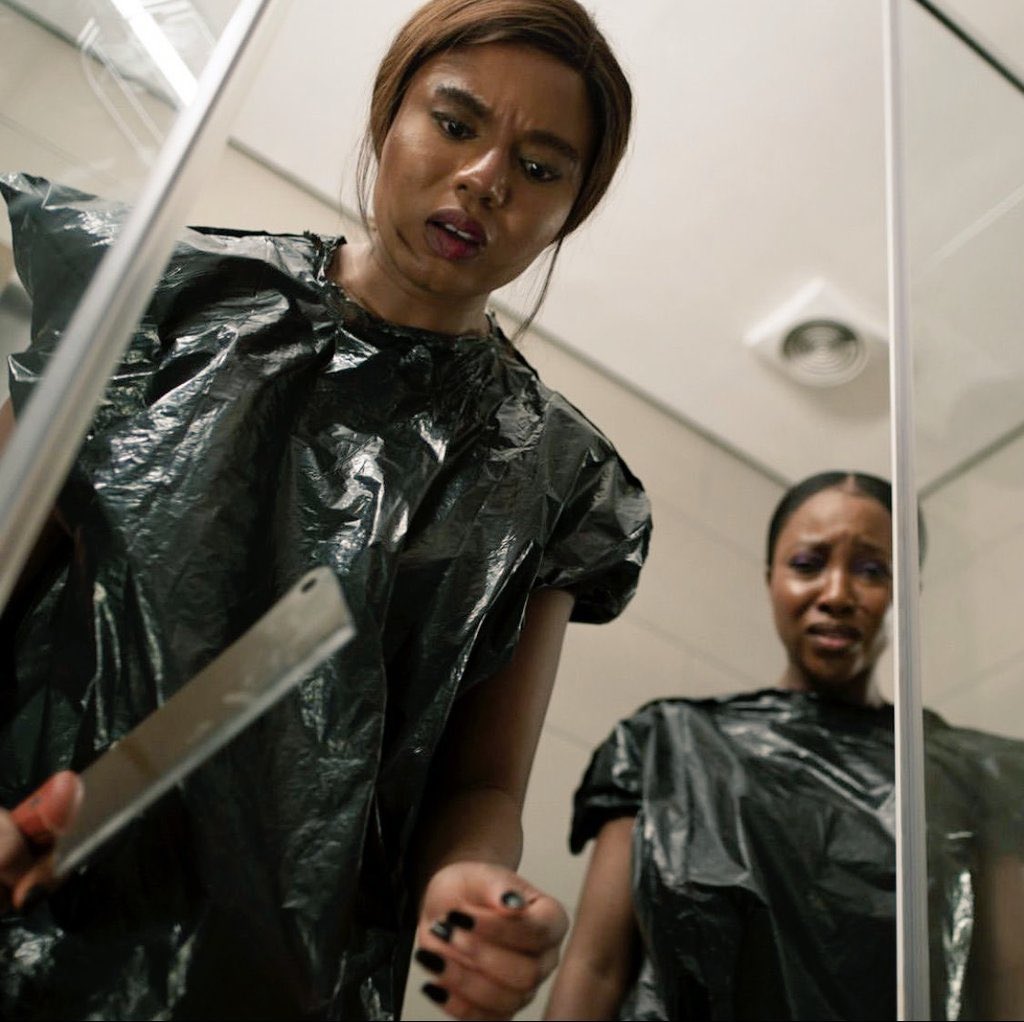 Criticisms against Nollywood have often zeroed in on the quality of its storytelling — its attention to detail and overall coherence and smarts. Blood Sisters is, mostly, free of such impediments. It’s a well-told story, skillfully marshalled by Kenneth Gyang and Biyi Bandele, who direct two parts each of the four-episode series. I wrote elsewhere about Nollywood’s inability to write truly intelligent protagonists, and on its reliance on dim-witted characters for incidence. It’s Nollywood’s favourite card trick: characters of mean intelligence seem many a Nollywood scriptwriter’s preference. Were I to divine why this is so, I’d say it’s because stupid characters ease the scriptwriter’s duty. Stupid characters make foolish decisions all the time, and a scriptwriter can always rely on that to move a story forward or to declutter a clumsy plot point. Clever characters, on the other hand, mean harder and longer thinking on the scriptwriter’s end. Here’s where I’d instance the detective who investigates Kola’s death. He is cast as a veteran gumshoe, made wise by life and, as sketchily hinted, by the loss of a loved one. And yet he struggles to grasp basic Nigerian class politics. It rings improbable, but then the scriptwriters needed him to be uncharacteristically thick so he could have a skirmish with his shifty boss, a role which an exophthalmic Segun Arinze plays with wide-eyed  flippancy. And then there is Blade, the assassin who flouts a rule I suppose would be cardinal in any assassin’s creed: Thou mustn’t look like an assassin, especially while on a job. Likewise, Blade’s foolishness only comes about because the scriptwriting gods who created him needed him to stick out at the wedding party earlier alluded to — a ploy meant to justify his later meeting with the detective.

More importantly, the series, focused on Sarah and Kemi’s maze run, one that has them rowing through the wooden stilts of Makoko, does not sufficiently dig into the self-contained psychological potential that the Ademola family’s dysfunction offers. Why is Kola a woman-beating asshole? What really animates Kola and Femi’s brotherly feud? Why does Kola’s mother despise all of her children but one? The Ademola runt, Timeyin (played by Genoveva Umeh, whose performance here is nothing like the hammy embarrassment she had going in One Night in Lagos) gives insights into the family’s trauma. But the few broken lines of explanation she offers could easily be made into four or five episodes of explosive drama. If there’ll be a season two, as season one’s open-ended ending suggests, then the series will do good for itself by taking us through the lows and lows of the Ademola family’s depravity.

Michael Aromolaran — @_michaelberlin on Twitter and Instagram — is a Nigerian writer and journalist, who enjoys thinking about literature, football, music, and film.