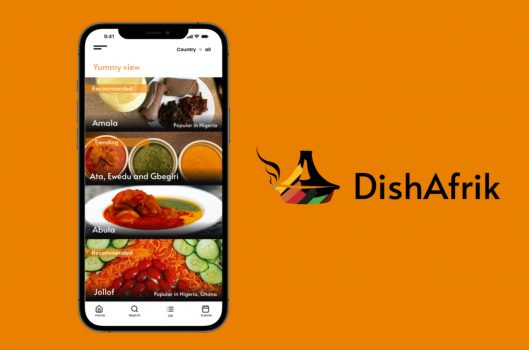 DishAfrik, A Culinary App That Seeks To Curate African Cuisine On A Global Scale, Set To Launch In Style

Cuisine is an integral part of a people’s culture. In visiting a continent, country, or city for the first time, a major metric of immersion into the culture is experiencing the meals that are indigenous to those places. It is impossible to say that you visited India if you fail to try out Biryani or Chicken Tikka Masala, and can you even say you’ve been to Mexico if you haven’t tasted Cliaquiles or Tostadas?

Africa is, among other things, rich in culture. The continent’s sights and sounds are picturesque, and there is a diverse array of stories, but one thing that makes Africa stand out is the exotic nature of its cuisines. From Nigeria’s Jollof Rice to Ghana’s Kenkey and South Africa’s Boerewors, there is a lot to choose from. However, access remains a problem, even where these meals have been exported to other continents. How does a tourist easily locate a restaurant that prepares good Ofada Rice when they land in Lagos? What are the odds of making the best choices when it comes to seeking out Waakye in Kumasi? How does a Nigerian new to London make sure that they don’t have to go too far just to find a good African eatery?

These are the challenges that DishAfrik, a new mobile food recipe app, seeks to solve. Co-created by Dadepo Aderemi (a Netherlands-based Nigerian entrepreneur) and Mary Maamah (a Ghanaian corporate executive), the app seeks to bring the world closer to the uniqueness that is African cuisine.

The focal point of DishAfrik’s operations would be facilitating ease in finding recipes. The app will enable users to search and find recipes based on factors like ingredients, for example, streamlining searches to recipes that include baobab leaf and tomato, but exclude red meat. It would also be possible to filter searches based on regions (West Africa or South America), taste profiles (sweet, umami, or sour), or possible allergic reactions (itching or hives).

DishAfrik plans to host an exhaustive database containing nutritional information on ingredients used in African delicacies. This would ensure that while users and subscribers enjoy making these recipes, they also get to know the nutritional values that influence certain dietary decisions. The app would also provide a platform for those interested in sharing cooking procedures with the world, by way of virtual sessions where people can watch the step-by-step meal preparation and ask questions on how to prepare available recipes.

Speaking to Afrocritik about the relevance of DishAfrik to African culture, Dadepo Aderemi, co-creator of the app, says: “It (DishAfrik) is a culinary curation project that is focused on African cuisines. Think of it as Yummly.com or Tasty.co, but for African dishes. In a continent that is home to 54 sovereign states, and over 1.4 billion people, we believe there should be a platform that enables anyone from anywhere to discover and enjoy recipes from the Motherland. This is what DishAfrik seeks to be.”

On September 13, 2021, DishAfrik launched a campaign via Indiegogo to kickstart the operations of the platform. The campaign has been remarkable for its use of Non-Fungible Tokens (NFTs), which would be in form of a uniquely generated image collage similar to Beeple’s Everyday: The First 5,000 Days. The collage would consist of 54 pictures of 54 different foods from Africa, each from 54 countries on the continent. The NFT would also contain meta-data that contains detailed information on multiple recipes. To learn more, click here.